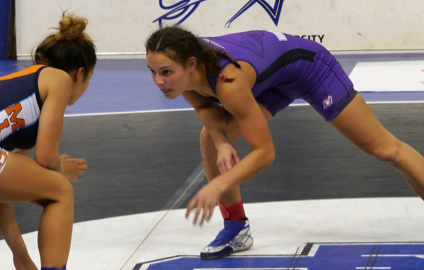 It has been a record-setting year for women’s wrestling in Iowa. As of this week, there are 92 female wrestlers who are certified and wrestling on their high school teams. That is a 39.4% increase over last year’s 66 wrestlers. Just imagine what that number would grow to if Iowa would sanction girls wrestling at the high school level!

You may have seen some of the media coverage over the past week or two. There is certainly some good momentum as we move closer and closer to the sanctioning of girls wrestling in Iowa.

Four of Iowa’s collegiate women hit the mats at the NWCA duals with some impressive results.

Anna Poyner of New Hartford represented Missouri Valley at 136 pounds in the NWCA Duals. In the opening round of the day, MoVal faced Life University of Marietta, GA with Poyner taking on Zoe Wight. Poyner gave up a 4-10 loss by decision with MoVal finishing with a 17-31 loss in the dual. On the consolation side, MoVal had a bye in the first round and then competed against Jamestown University of Jamestown, ND. Poyner picked up an impressive 14-4 techfall win over Caitlyn Kaz, but couldn’t quite get MoVal to the win. Jamestown took the dual victory 25-22 and Missouri Valley was eliminated from the competition.

OCU was seeded in second place coming into the duals and Watters notched a solid 10-0 tech fall win over Autumn Rux at 170 pounds on OCU’s way to a 42-0 dual win over Adrian College of Adrian, MI. In the quarterfinals, OCU faced Missouri Baptist University of St. Louis, MO. Watters picked up a 13-5 decision over Myranda Velazquez at 170 pounds to help OCU take the dual, 25-19.

In the semi-finals, OCU faced McKendree University of Lebanon, IL. While Watters picked up a 3-1 decision over Alexandria Glaude, it was not enough to hold off McKendree who notched the 29-13 victory.

In the third place dual, OCU faced Campbellsville University of Campbellsville, KY. Watters picked up a solid 12-1 techfall over Mariah Harris at 155 pounds but OCU was unable to finish the dual on top. OCU gave up the 14-31 loss to take 4th place for the tournament.

Megan Black of Batavia and Jasmine Bailey of Iowa City both represented McKendree University at the NWCA duals. Bailey is a 143 junior and Black, also a junior, wrestled at 130 pounds. Black is a 2014 WCWA All-American and is ranked #2 at 130 pounds in the WCWA College Rankings (January 3). Black is also ranked #9 at 58 kg/128 pounds in the USA Wrestling Senior Women’s Freestyle Rankings (January 4).

In the first dual of their tournament, McKendree faced Lindenwood University-Belleville (Belleville, IL). Black got a solid start with a pin over Erin Phillips at 130 pounds while Bailey picked up a forfeit at 143. McKendree picked up the dual win 38-7.

The quarterfinal round saw McKendree taking on Wayland Baptist University of Plainview, TX. Black picked up another fall over Breanna Dudoit-Vasquez while Bailey won an 8-8 decision on criteria over Marina Briceno. McKendree finished its second dual with a 24-19 win.

In the semifinals, McKendree faced Oklahoma City University. Black continued her pin streak and picked up a fall over Carla Ponce who is currently ranked #3 at 60 kg/132 pounds (USA-Senior Women). Bailey picked up a 6-3 win over #5 ranked (WCWA) Maggie Douma. Douma is also ranked #7 at 63 kg/138.75 pounds (USA-Senior Women). McKendree went on to win the dual 29-13 and move into the finals.

In the finals, McKendree faced three-time NWCA duals champion, King University of Bristol, TN. In a surprising move, King wrestled their 116 pounder and 2016 Rio Olympic Team Member, Haley Augello up at 130 pounds against Black. Black and Augello were roommates and teammates when Black was a freshman at King University. Black continued her perfect tournament with a pin in the second period after leading Augello 5-4. At 143 pounds, Bailey faced #2-ranked (WCWA) Jessi Kee. Kee also holds the #6 ranking at 63 kg/138.75 pounds (USA-Senior Women). Bailey gave up the decision 0-6. McKendree went on to give King a closely contested dual but ended up with 19-24 loss to claim their Runner-up National Championship spot.

Weeks five and six of the season saw more great competition from our high school wrestlers. Some highlights include the following varsity performances:

Alaina Sunlan, a freshman from Monticello captured two falls (3:35 & 5:24) while going 2-5 during the last two weeks of competition. Sunlan’s varsity record stands at 8-11 for the season with a 2-3 JV record.

Ali Gerbracht, a freshman from AGWSR picked up a first-period fall (:59), an 11-0 major decision, and 2 forfeits on her way to a 4-3 record over the past two weeks. Gerbracht’s record stands at 9-7 for varsity and 2-0 for JV.

Shae Muecke, a sophomore from Kingsley-Pierson had a 12-6 decision and a forfeit in her last two weeks of competition, going 2-2. Muecke’s record stands at 8-5 for varsity, while her JV record stands at 0-3.

Felicity Taylor, a junior from South Winneshiek went 4-2 over the past two weeks with a 9-1 decision, 2-0 decision, and two forfeits. Taylor’s varsity record sits at 14-5 for the season.

Kim Hendrian, a junior from Roland-Story picked up an impressive 13-second fall as well as a forfeit to go 2-3. Hendrian’s varsity record is 4-7 for the season and JV record stands at 4-4.

There are still plenty of opportunities to come out and show your support for these athletes! We will continue to bring you timely updates throughout the season!

Don’t forget to mark your calendars for the South Dakota State University Girls Intensive Wrestling Camp June 11-17 at SDSU in Brookings, SD. The camp will be run by USA Wrestling Women’s National Team Coach, Terry Steiner and SDSU Head Coach, Chris Bono. These coaches are highly respected leaders in the wrestling community who have stepped up to support the growth of wrestling and the growth of girls wrestling. They are creating opportunities for our wrestlers to receive solid coaching and see exponential growth in technique, mindset, and the fundamentals of wrestling.