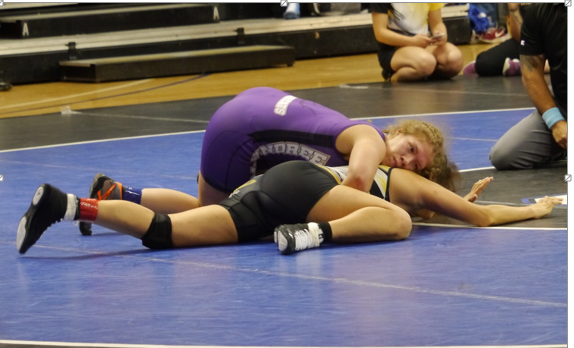 As the college season marches towards the WCWA Nationals in February, we are pleased to bring you updates on our Iowa women who have seen competition since our last update:

Megan Black, a redshirt junior from Batavia, wrestled in the 130 pound spot for McKendree University (Lebanon, IL). Black, who is ranked #2 at 130 pounds in the WCWA Rankings (January 3) and ranked #9 at 58 kg/128 pounds in the USA Wrestling Senior Women’s Freestyle Rankings (January 4), went 4-0 in the dual competition (3-0 official, 1-0 exhibition).

Jasmine Bailey, a junior from Iowa City, wrestled at 143 pounds for McKendree and proved with authority that it is time to reclaim her place in the college rankings.

In their second-round dual, McKendree faced Southern Oregon University (Ashland, OR). Black notched a 10-0 techfall win over #5 ranked Alejandra Rodriguez, while Bailey picked up a first period pin (2:14) over #3 ranked Desiree Zavala to help McKendree to a 57-2 victory.

The third-round dual for McKendree was against a dual team comprised of extra wrestlers from participating programs. Black picked up a nice first-period fall (1:01) over Ashley Osackuk of Simon Fraser University (Burnaby, B.C.-Canada) while Bailey had a forfeit.

In the final dual of the day, Pool 1-champions, McKendree faced Pool 2-champions, Simon Fraser University. Black finished the day with an 11-6 decision over #6 ranked Jennifer Anderson while Bailey gave up a 1-9 decision to #4 ranked 136 pounder, Frecesca Giorgio. Giorgio is also ranked #4 at 136 pounds in the USA Senior Women’s Rankings.

Anna Poyner of New Hartford, wrestled in the 143 pound spot for Missouri Valley College (Marshall, MO). Poyner picked up an impressive 13-0 technical fall in the second period over Addie Lanning of Ottawa. This win improves Poyner’s record to 17-12 for the season.

All of Iowa’s college women will be back in action this weekend at the McKendree Open.
Wrestling will begin Saturday morning at 9:00 a.m.