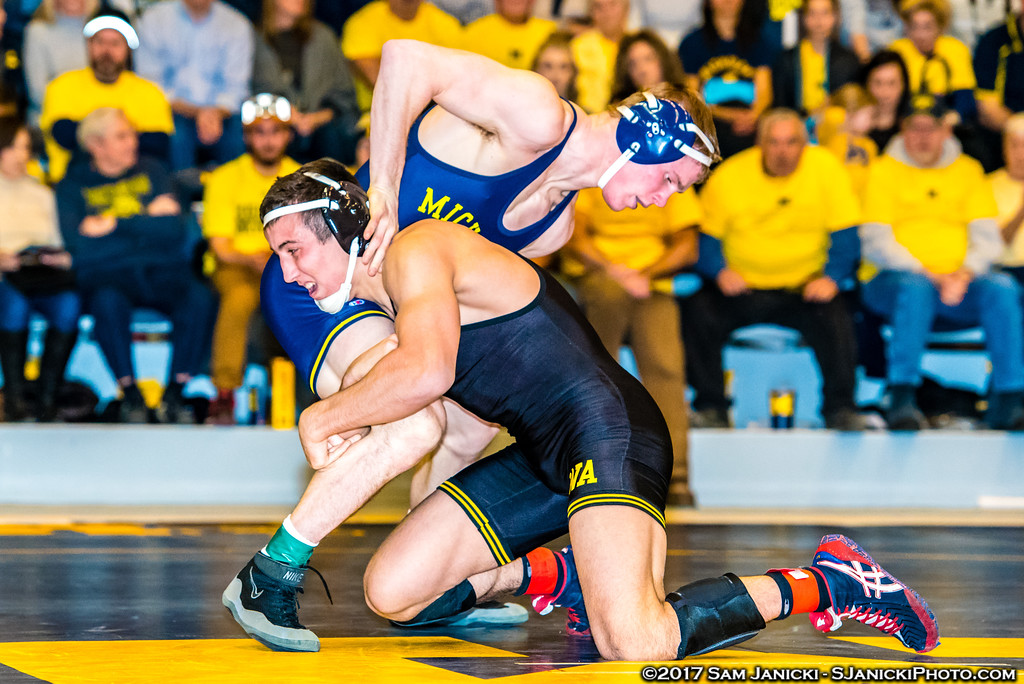 The Iowa Hawkeyes return to Carver Hawkeye-Arena for the first time since December 10th to host #2 ranked Penn State this Friday in a dual matchup that could feature as many as 18 ranked wrestlers. In additional to there being a bounty of ranked wrestlers the dual could also see as many as four top-five matchups, including the #1 vs #2 battle at 157 pounds.

The Hawkeyes enter this dual having won six of the last eight meetings with Penn State, with the last meeting being a 18-12 victory at Penn State. The matchup will test one of Iowa’s longer running streaks with the Hawks currently riding a 24 conference dual winning streak and their last loss coming to Minnesota back in January 2015. Wrestle Stat’s computer will favor the Nittany Lions in this week’s dual, which means the Hawks will have their work cut out for them.

Out of the entire Hawkeye lineup, Thomas Gilman stands apart from his team in churning out bonus victory after bonus victory, and being the lead off man that often times gives his team momentum. While it’s true Gilman hasn’t faced too many tests this season, Nick Suriano figures to be one of Gilman’s chief opponents with the ability to knock him off his top spot. Only a true freshman, Suriano has made the transition from high school to college look easy as he now carries a top five ranking in the country. For all his talent the one thing Suriano lacks when compared to Gilman is experience which figures to play heavily into Gilman’s favor in this match.

While 133 would normally be the next big matchup with Jared Cortez taking on Cory Clark it sounds as though the Penn State wrestler may be done for the season with an injury. That means George Carpenter should be out on the mat Friday. With Cortez out, the next big match is at 141 pounds where the Hawkeyes will be eager to see if senior Topher Carton can continue his strong season with a win over former All-American Jimmy Gulibon. Carton is coming off a loss to #1 ranked Dean Heil last weekend, but while he came out of the match with a loss he did notch a takedown against the returning champion. It’s clear Topher’s offense is up there with the best of them, so to win this matchup the first period will be extremely important. A first period takedown could give Carton the confidence he needs to come out with a win in this match.

The second top five matchup is a 2016 NCAA final rematch between Brandon Sorensen and Zain Retherford at 149 pounds. Last season Retherford was able to widen the gap between his two matches with Sorensen going from winning 4-0 at Big Tens, to a 10-1 major decision at NCAAs. Additionally, Sorensen is coming off a recent loss to Oklahoma State’s Anthony Collica last weekend where he wasn’t able to score on any offensive attempts. Finding his offense against Retherford should provide a confidence boost for the junior and the Hawkeyes.

At 157 we will see a pair of wrestlers who grew up practicing at the same wrestling club square off in a #1 vs #2 battle. Both Iowa’s Michael Kemerer and Penn State’s Jason Nolf attended the famous Young Guns Wrestling Club growing up in the state of Pennsylvania. The pair will likely be highly aware of their opponent’s tendencies in the match since they have grown up seeing each other wrestle a couple times a week for years. While Nolf is the #1 ranked wrestler, Kemerer’s emergence has been even better than expected with the Hawkeye downing three top ten opponents in his last four matches going back to the Midlands finals. While most knew about Kemerer’s ability to get in on his opponents legs and convert those into scores, it’s his scrambling ability that has put him into the #2 spot in the rankings.

Just like 141, the 174-pound bout looks to be a potential swing match in the dual, with both teams having a shot to win the matchup on paper. Meyer is in the middle of a rough patch, having gone down to Lelund Weatherspoon at the Midlands (a wrestler he beat in the dual just weeks prior), and then back-to-back losses to top ten opponents at Michigan and Oklahoma State. While a rebound would be big for Meyer’s confidence going forward, if Iowa manages to take both 141 and 174 it would give their team a 12 point swing which is what the Hawkeyes will need to win this dual.

The final top five battle will be at 184 pounds between Penn State’s #2 ranked Bo Nickal against Iowa’s #4 Sammy Brooks who is coming off a huge beat down on Oklahoma State’s Nolan Boyd last weekend. Nickal was the NCAA runner-up at 174 pounds a season ago, and so far has made the transition to 184 pounds with little trouble. While Penn State fans are probably feeling comfortable that their wrestler will come out on top of this match, if we see the Brooks we saw last weekend it could be a different story.

The final bout to watch will be a top ten meeting between Penn State’s #4 Nick Nevills and #9 ranked Sam Stoll at heavyweight. Stoll is coming off a tough loss to Oklahoma State’s Austin Schafer last weekend getting taken down in the closing seconds of the match. Stoll has received quite a bit of flack this season for digging in underhooks and back guys off the mat. The main reason Stoll’s opponent back off the mat is their fear that Stoll, who has a strong background in Greco-Roman wrestling, will uses that pressure against them to throw them to their back. it will be interesting to see if Stoll continues that gameplan that has typically worked for him, or if he will try and open up his leg attack offense.