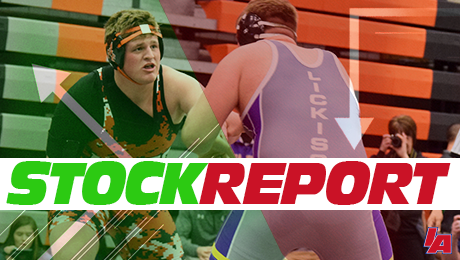 Grayson Kesterson – Kesterson took home the 106lb title at the Jerry Eckenrod Tournament on Saturday. His performance was key in helping Williamsburg take home the team title as well. #4 ranked Kesterson pinned #2 ranked Jack Thomsen of Union in the finals (look for that video later this week on IAwrestle). He also has a win over the #2 ranked wrestler in class 1A.

Austin Yant – Yant claimed the 152lb title at the prestigious Cheesehead wrestling tournament in Wisconsin over the weekend. This tournament featured 17 nationally ranked wrestlers across the 14 weights. Yant won six matches over the course of the two day tournament highlighted by wins over the #3 and #7 ranked wrestlers in Illinois. He also helped Waverly to a 13th place finish out of the 31 teams. Yant was the only Iowan to win the tournament in which Waverly and Southeast Polk competed in.

Colin Newell – Newell claimed the 285 pound title for Ames this weekend at the Jack Mendenhall Invitational. In doing so he knocked of the #3 and #4 ranked wrestlers in 3A. Newell currently finds himself ranked #8 in 3A, but you can bank on him being a lot higher in the next set. Collin has a 19-2 record on the season with one of those losses coming from a two-time world champion, so it’s safe to say he is having an impressive season. WATCH MATCH

Iowa rookie starters – The Hawkeyes started this season looking to replace four starters from the previous year and so far the new guys are picking up the slack. Michael Kemerer is having the most successful start, with the freshman holding the nation’s #2 ranking and is coming off a weekend where he beat former All-American Brian Murphy of Michigan. Topher Carton has looked great too, with the senior placing seventh at the 2016 Midlands Championships and then adding a 12-2 major decision over #16 Javier Gasca of Michigan State this weekend. Iowa also saw freshmen Joey Gunther and Cash Wilcke earn upsets over the weekend, with Wilcke downing #25 Jackson Striggow of Michigan and Gunther defeating #23 Drew Hughes of Michigan State.

Skylar Noftsger – Ballard’s 138lber is putting together an outstanding season, with what is potentially his biggest win to date coming on Saturday over #3 Tanner Abbas of Clarion Goldfield (WATCH MATCH). He also has a win over Bryce Murano of Dallas Center-Grimes who is currently ranked #6 in 3A. His record on the season is 25-2 with one of those losses coming from out of state competition.

Iowa junior college teams – Iowa JUCO teams started out the tournament with the 2nd, 3rd, 4th, and 5th seeds. They only managed to finish 3rd, 4th, 6th, and Tied for 9th. Iowa Central was the #2 seed, but dropped a tight 23-17 dual with Clackamas College in the semi’s. Clackamas went on to win the title. Ellsworth finished at seed placing 4th. The #3 seed, Iowa Western, dropped 2 duals and finished 5th. Iowa Lakes was the #5 seed but went 0-2.

Minnesota – It’s bad enough the state of Minnesota has to live with the fact that they aren’t as awesome as their neighbors to the South, but now their only Division I wrestling program is a shell of what it once was. This week former Bettendorf prep Fredy Stroker announced he was leaving the Gophers wrestling team. Minnesota also lost another top recruit when Larry Early announced he’d be transferring too. Stroker has not announced where he will be wrestling next year yet, but as long as it isn’t another Big Ten school he will still have three years of eligibility left.

Chase McLaughlin – It was a rough weekend for 1A’s #1 ranked 138lber. McLaughlin suffered losses to an unranked Wade Mitchell of Woodbury Central and also a loss to #7 ranked Kaleb Krall of Wapsie Valley. McLaughlin was a state runner-up last year for Lisbon and was a state qualifier from the year before. He has shown that when it matters he can win big matches so he will be fine come tournament time, but will probably drop down a few places in the next set of rankings.

Iowa State – Friday was the first time Iowa State had lost to Arizona State at home since 1989. Add that to the Cyclones only getting three wrestlers on the awards stand at Midlands, and it has been a rough year for them. They seem to be getting healthier though, and had a strong showing from some of their younger wrestlers.