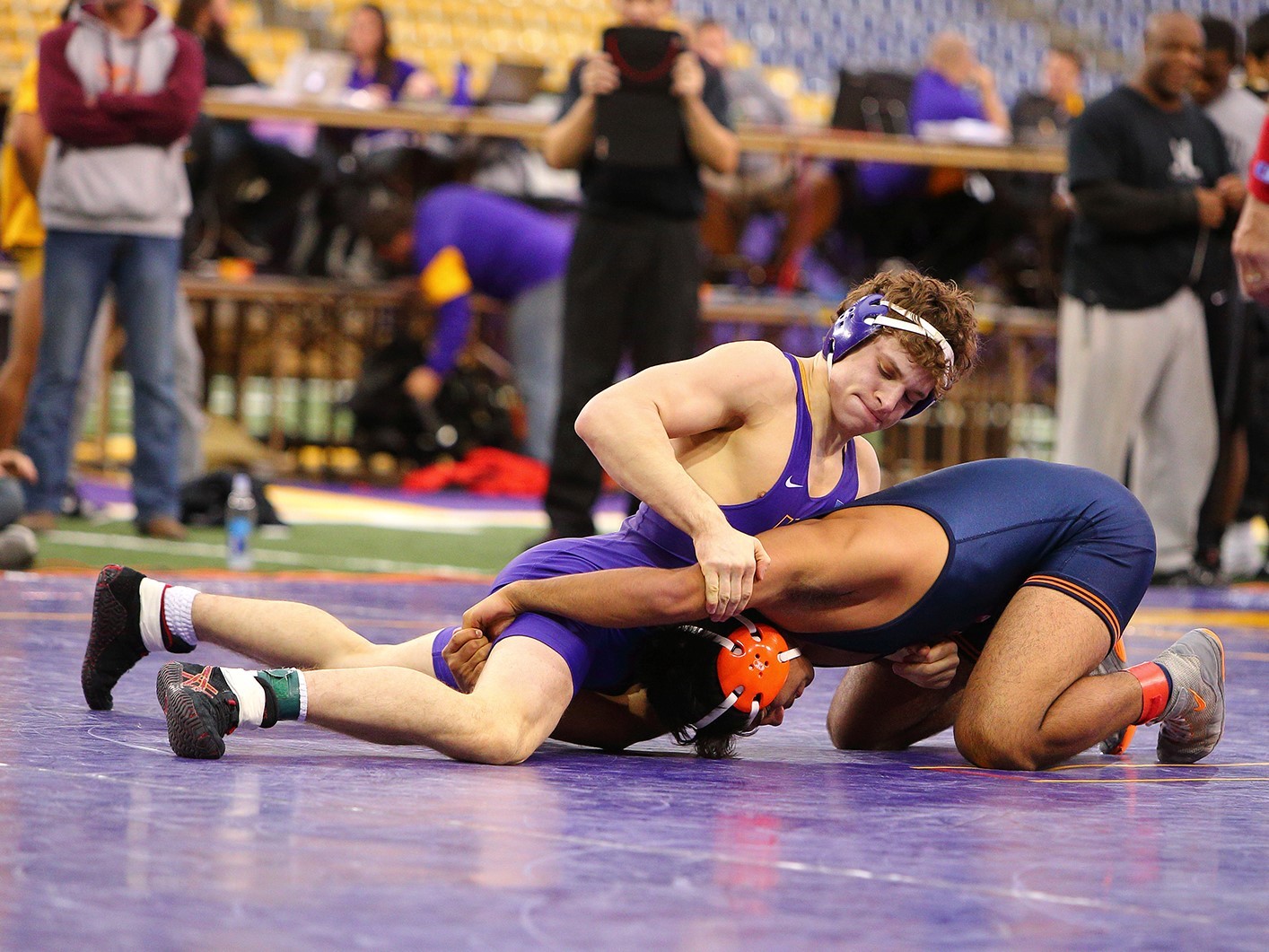 The UNI wrestling squad found itself in a different position today as they hosted Northern Illinois in a Mid-American Conference dual at the West Gym Sunday afternoon. The Panthers trailed for six full matches before coming and getting a lead.

Trailing 14-7 after intermission, #14 Taylor Lujan came out ready to get the Panthers (4-2, 2-0 MAC) back into it. Lujan came out with a couple lat drops and would eventually lock one up for a pinfall win in 4:41. That pulled the Panthers to within one point, 14-13.

184 pounder Jacob Holschlag wasn’t letting up, as he came out and scored a dominate 11-1 victory over Bryce Gorman. There was a weird R2 and NF4 in the second period for Holschlag, and the match was never in doubt after that. Holschlag’s win put UNI in the lead, but NIU would come back at 197 to tie the dual at 17.

Heavyweight JJ Everard would win a workman-like match, 6-2, and put the Panthers ahead for good. Dylan Peters secured the win with a 7-1 decision over NIU’s Brock Hudkins to.

The first match of the day did not go as the Panthers expected. Jay Schwarm bumped up from his normal 125 pound weight to sub for #15 Josh Alber. Schwarm dropped his first match at 133 this year, 16-0 to NIU’s Alijah Jeffery. Jake Hodges dropped a close match at 141 pounds to Angel Velasquez, 3-2.

Max Thomsen stopped the bleeding for UNI at 149, but the freshman was stifled on every shot he took. NIU’s #19 Steve Bleise did a good job of fighting off everything Thomsen threw at him, which was more than a few high crotch attempts. Bleise was inactive though, and got hit with a stall call in the third period that was ultimately the deciding point.

NIU would get big points on the board though, as Paden Moore and #25 Caden McWhirter hit heads in the first 10 seconds of their match. Moore was knocked woozy, and would not pass concussion tests to forfeit out of the match. That put NIU up 14-3.

Bryce Steiert would add points for UNI as well, winning 18-5 over Shaun’Qae McMurtry.

The lineup for UNI looked a little bit different than it has in the past. #15 Josh Alber was not in the lineup, dealing with an injury that has lingered a little bit. Jay Schwarm bumped up from his normal 125 weight, but he fell 16-0 to NIU’sAlijah Jeffery.  At 197 Chase Shedenhelm took the mat for the first time as a starter, and while he wrestled a solid match, he fell 4-2 to Shawn Scott.

UNI will be in action next Sunday, when they travel to Central Michigan. We’ll have a full preview of that dual later this week.