Iowa vs MSU Play by Play 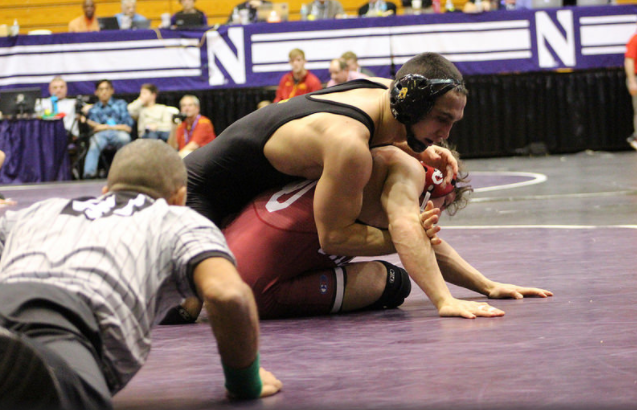 (Matchups go BOLD when they are live)

1st: Thomas Gilman in the front head lock, grabs an ankle and go behind for a takedown. Releases Griffin, back to the front headlock, comes to the side for a cradle and gets a fall.

1st: Clark in a front headlock, Eicher holding onto the elbow, brings them back to his feet and goes for his Russian two on one arm tie. Eicher tries a sweep single, Clark has his legs back, grabs the far ankle breaks the hand hold to come around for the takedown. Clark puts the leg in and flattens Eicher out to his belly. Clark working tough for arm bars, having trouble getting out to the side to run it. Eicher warned for stalling. Period ends 2-0

2nd: Clark begins down and able to get out for an escape. Eicher tries to get Clark in a front headlock, Clark comes back to his feet and has his Russian tie. Tries a high crotch on the edge, Eicher fights it off, Clark switches to hit a double that he finishes for his second takedown, going back to work on top on the edge. Eicher hit for stalling on bottom, Clark ends period up 6-0 and has RT.

3rd: Eicher takes down, Clark into a chicken wing on one side, Half sunk in on the other side. Clark pulling on the chicken wing, but they stalemate it. Clark unable to turn him

1st: First minute both guys trading collar ties and clearing out. Midway thru the period, Carton hits a high crotch and is award the takedown. Carton comes out front looking for a turn and loses his position for a Gasca escape. Off a restart, Carton gets in on Gasca’s hips and able to come out on top in the whizzer position for his second takedown, he leads 4-1 after the 1st.

2nd: Carton starts the period down, gets up to his feet and has an escape. Gasca comes in on a shot, Carton gets a cement mixer and whips over Gasca for a takedown and 4 NF to open the match, 11-1 lead. Carton tries to lock it up the fall, but Gasca wiggles out for an escape. Gasca comes in on a swing single and looking to come out the back door from his knees, Time expires, 11-2 Carton lead.

3rd: Apologies lost internet feed for updates. Gasca started down, Carton been on top all period, currently has a leg in.

1st: Quick takedown Sorensen to open the match, Sorensen lets Trimble up to his feet for the escape. Sorensen changing levels grabs the leg and finishes for a takedown, Trimble warned for stalling. Sorensen catches some suck back 4 NF as time expires, was in a potential position to score the fall. 8-1 Sorensen lead

2nd: Sorensen starts down and is out in less than :10. Head inside single for Sorensen grabs the far ankle to finish for a takedown. Escape for Trimble, Sorensen in on another single trips Trimble backwards for yet another takedown. Sorensen finishes the rideout, over 2 min RT. 13-2 lead

3rd: Trimble starts down and Sorensen lets him up. High crotch and finish for Sorensen. Cuts right away. Sweep single for Sorensen, cuts again. Sorensen coming on another attack, Trimble backs out and hit with stalling, another point Sorensen. Ankle pick to a finish for takedown

1st: Thompson with a shot midway thru the first, Kemerer counters and spins around for the first score. Kemerer cuts, tries a single attempt, Thompson backs out and they go back to their feet. Kemerer with another takedown as time expires, leads 4-1

2nd: Kemerer starts down, hits a standup and Thompson kind of falls back and just loses hold of Kemerer to surrender the escape. Straight on shot attempt for Kemerer, Thompson warned for stalling. Another straight on double shot that he finishes for the takedown. Tries a cheap tilt on the edge. Gets a one count twice, but not able to get back points  7-1 to end the second.

3rd: Thompson starts down, Kemerer releases him, tries another straight on shot and Thompson stuffs the head. Reshot by Thompson in on Kemerer’s  leg, now Kemerer stuffs the head and comes around for a takedown. Kemerer flattens Thompson and sinks a power half in. Stall warning on Thompson with his head on the mat, point for Kemerer. Kemerer finishes with the major

1st: Both guys working the head with ties. No shot attempts thru the first two minutes. Now Gunther with a high crotch attempt, Hughes fights out of it on the edge. Period ends scoreless

2nd: Gunther takes neutral, wants no part of underneath. Hughes slipped around behind Gunther, but Gunther did a nice job of circling around and getting his hips back to avoid a mat return/takedown. Still neutral. Gunther in a front headlock looking for a whipover, Hughes backs out, stall warning on Hughes. Gunther has the leg picked up, takes Hughes to his hip and able to secure the takedown with short time in the period. 2-0 Gunther.

3rd: Hughes takes top, looking to sink a leg in now gets both in. Gunther trying to come up to his feet. Hughes is a little high and sinking a hard power half, Gunther fighting it hard. Gunther bellies out,  warned for stalling, Huhges really pulling the arm Gunther wins.

1st: Meyer working his Russian two-on-one arm tie, snap down, hits a swing single and picks up a takedown with 1:18 left in the period. Meyer rides tough, but not a lot of action, 2-0 lead.

2nd: Meyer starts down and gets out for the escape, Meyer wastes no time getting a takedown, gives an escape, single to another takedown. Barnes warned for stalling on the bottom. 7-2 with Barnes getting a late escape after the 2nd.

1st: Maskill in on a single here early, Brooks trying to break the grip of Maskill and does. Brooks now grabbing Maskill’s ankle and locks up a cradle on the edge of the mat for his takedown. Maskill able to get an escape on a restart, Brooks comes with an underhook and powers thru for another takedown. Brooks traps the arm and catches Maskill on his back for 4NF. Brooks tries to ride then cuts Maskill, Brooks snaps and goes behind for a takedown. Cuts Maskill again. Snap by Brooks again and Brooks finishes, 12-3 lead.

2nd: Brooks starts down, tries to stand up and Maskill sucks him back, Brooks able to get hip separation and come around for a reversal. Brooks gets another tilt for 2NF. Brooks rides out 16-3 lead

2nd: Wilcke started down, gets out in under :10, Okaiye with a shot from space that Wilcke defends easily. Straight on double from Okaiye, Wilcke body locks and lifts to get the takedown but loses control, score it T2 Wilcke, escape Okaiye

3rd: Okaiye starts down and is explosive off the start, Wilcke doing a good job returning. Okaiye back to his feet and is out for an escape. Wilcke shoots in on a low single, comes out the back door for his third takedown with under a minute to go. Okaiye  gets a late escape

1st: Cooper warned for stalling twice in pretty quick succession, 1-0 lead for Stoll. Brands gets a bench warning. Stoll in a body lock, Cooper backs out, another point Stoll. Stoll moving Cooper with ease, Cooper backing just about every time off the whistle. Stalling on Cooper. 3-0 Stoll lead. I guess they did award Stoll a takedown somewhere in there, 5-0

2nd: They start neutral Stoll back Cooper out and Cooper is DQ’d