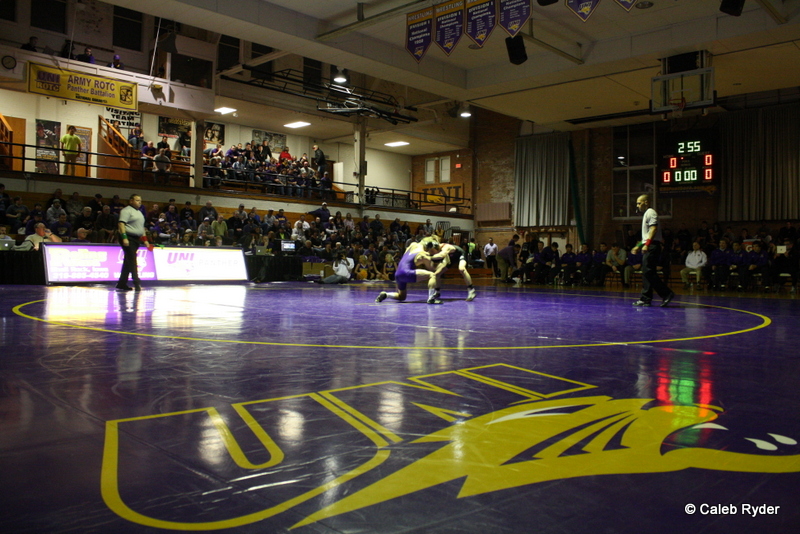 The Northern Iowa wrestling squad returns home for the first time since taking fifth at the Southern Scuffle for a dual against the Northern Illinois Huskies. NIU has struggled a little bit this year, going 3-2 overall, and they are 0-1 in Mid-American Conference competition. These two squads last met up in a dual at Victor E. Court in DeKalb, with the UNI winning 24-12.

Northern Illinois is coming off a 20th place finish at The Midlands, where they had only one medalist; 165 pounder Shawn Scott took third after upsetting Wisconsin’s #10 Ricky Roberts in sudden victory.

“It was great to see Shawn get back in touch with his strengths this weekend,” said head coach Ryan Ludwig. “The thing I’m always most proud of is his grit, heart, and hustle and he brought all three all weekend.”

Despite Scott’s win, he is still unranked in TrackWrestling’s latest poll, but he’ll be a tough opponent for Bryce Steiert nonetheless. Steiert has made his way back into the top ten after taking third at the Scuffle, defeating the # seeded Nick Wanzek from Minnesota 5-3 in the consolation final.

At 149 pounds fans will see the only match of the day between two ranked wrestlers, as #17 Steve Bleise will come in looking to knock off #8 Max Thomsen. Bleise was ranked #12 last season at 141 pounds, when Jake Koethe entered the UNI lineup and upset the Husky for his first win over a ranked opponent. The tables will be turned a bit this year, as Thomsen will look to avoid the upset at home. Thomsen joins Steiert and Josh Alber, coming off a third place finish at the Southern Scuffle.

This could be a dual where we see some lineup substitutions for UNI as well. Coming off a tough tournament like the Scuffle, it wouldn’t surprise me to see some different faces in the mix. Drew Foster did forfeit out of the tournament at 184 pounds, and while I don’t think he’s in any danger of missing big duals, Doug Schwab might think it best to start Jacob Holschlag in his place this Sunday.

“Sometimes you have fight through and other times it’s best to get some rest,” Schwab said of Foster forfeiting out to 6th place. “I like how he is competing. It’s one of the deepest weights in the country. He got dinged early in the match, and I think it had an impact. I do feel like he could pick that guy apart. He is going to continue to grow and get better. I don’t think there’s a doubt he’s one of the best in the country. I am really glad with where he is at.”

Overall UNI should be a heavy favorite heading into competition Sunday. The biggest thing that UNI can hope to build on from the Scuffle is getting wins at weights that have struggled a little bit coming into this dual, namely 141, 157, 197, and heavyweight.

The upper weights have been an issue, with the only win at 197 coming against the University of Nebraska-Kearney’s Corey Van Dorn, and that was by Foster. JJ Everard has also struggled a bit, going just 1-2 at the Scuffle, but he has also been dealing with an ankle injury. Wins from Bartel and Everard during this dual would go a long way towards easing concerns.

The dual is scheduled to start at 1PM, and we’ll have a live play by play thread for all the action. So if you can’t make it out to the West Gym follow along with us!

One thought on “UNI Returns Home for Northern Illinois Dual”