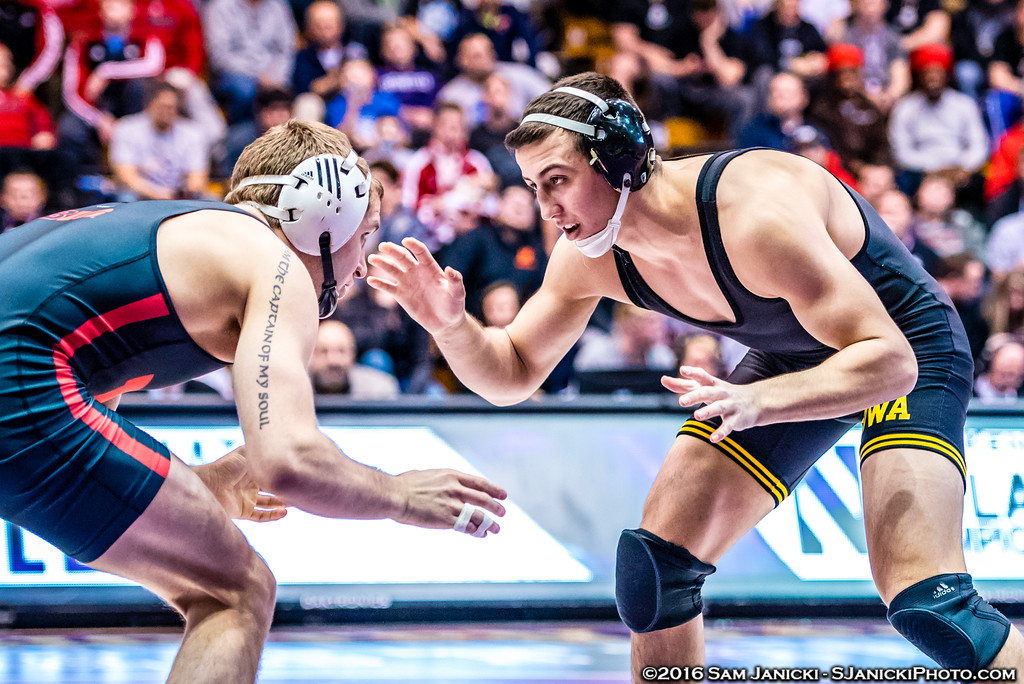 After wrapping up yet another Midlands title last week, the Iowa Hawkeyes will begin the 2017 portion of their schedule on the road with two conference duals against Michigan and Michigan State. The Hawkeyes picked up three champions at the Midldands overall saw nine wrestlers place on the podium on their way to the team title. One of the bigger boosts to the Hawkeye lineup was the return of Sam Stoll (285) who managed to take third place in what was his first action since the 2016 NCAA championships. The Hawkeyes were also propelled by top finishes from Thomas Gilman (125), Brandon Sorensen (149), and Michael Kemerer (157) who all added titles. Gilman was also named the tournament’s Outstanding Wrestler and Champion of Champions.

First up this weekend will be a meeting with a Michigan squad who usually poses a difficult matchup for the Hawks, but due to an unfortunate rash of injuries the team is a shell of what it could be. That’s not to say the Wolverines will be a walk in the park for Iowa, as they feature several wrestlers that could push Iowa’s starters.

As soon as Cory Clark‘s (133) injury was announced prior to the South Dakota State dual it was known that the Hawkeyes’ production at 133 was going to decrease. It’s never easy to fill the shoes of a two-time NCAA finalist and so far Phil Laux has recieved quite a few lumps while severing as the starter. In his interview with Trackwrestling, head coach Tom Brands indicated that Clark likely could have gone at the Midlands, but in an effort to be conservative they decided to wait until this week’s road trip to put him back out on the mat. The 133 bout against Stevan Micic appears to be one of the few matches Michigan stands to win this weekend, but a healthy Clark changes that. Micic is out to a solid start to his Michigan career and will give Clark all he can handle if he steps on to the mat Friday night.

In case you missed it, freshman Michael Kemerer (157) is off to a rolling start to his career with 16 straight wins including defeating a top five opponent, Tyler Berger of Nebraska. His next test will be the former All-American Brian Murphy who is never an easy out, especially on his home mat. A win here for Kemerer will make a big statement about not only about the quality of wrestler he is, but also will speak to his consistency on being able to provide wins for his team each time he steps on the mat.

The final key for the Hawkeyes will center on whether or not Brands finally pulls the trigger on Alex “The Bull” Marineli (165) and puts him on the mat instead of redshirt freshman Joey Gunther. Marinelli was one of two true freshman to place for the Hawkeyes at the Midlands (Kaleb Young was the other). While Gunther finished his tournament with a 3-2 record it appears that Marinelli has more potential to win big matches, as evidence by his wins over ranked opponents (*note* the following rankings were what the wrestlers were ranked coming into the match with Marinelli) #9 Clark Glass (Oklahoma) and #21 Andrew Fogarty (NDSU). Michigan features the nation’s #2 ranked Logan Massa and the Wolverines best bet to win a match on Friday.

*Alex Marinelli currently ranked #11 by Trackwrestling, but the projected outcome versus Massa remains the same as Gunther on Wrestle Stat.