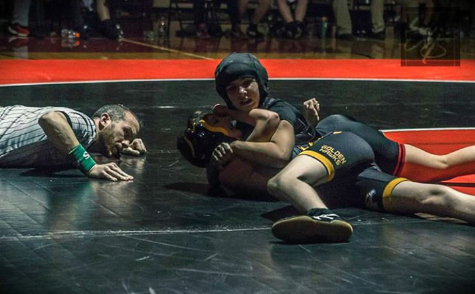 In very few places across the country is wrestling more important and more a part of the popular culture than right here in Iowa. It is an exciting time of year with wrestling in full swing, but it is especially exciting to see the rapid growth among the ranks of our female athletes.

With the addition of two wrestlers to the rosters since our last update, Iowa is up to 91 girls wrestling on their High School teams with at least one more getting weight-certified this coming week. At 91 wrestlers, that is a 38% increase over last year’s record of 66 female participants!

We are looking forward to the day when IAwrestle can report that we have surpassed 100 wrestlers competing on high school teams, in the state of Iowa. Regardless of when that day comes, we will continue to bring you timely updates throughout the season.

Megan Black of Batavia is a Junior wrestling for McKendree University of Lebanon, IL. Black is a 2014 WCWA All-American and is ranked #2 at 123 pounds in the WCWA College Rankings (December 6). Black is also ranked #5 at 55 kg/121 pounds in the USA Wrestling Senior Women’s Freestyle Rankings (November 16).

Black, who was seeking to qualify for the Senior World Team Trials, opened the tournament with a 7-11 loss by decision to #4 ranked (USA Wrestling-60 kg/132 pounds) Areana Villaescusa of Army-WCAP. She followed that up with an 8-0 win over Charline Hagemaster of Emmanuel College/LWC. In her next match, Black faced fellow Iowan, #7 ranked (USA Wrestling-58 kg/128 pounds) Lauren Louive of the Hawkeye Wrestling Club and gave up a 6-9 loss by decision. In her final match of the day, Black notched a 12-2 techfall win over #10 ranked (USA Wrestling-53 kg/116.5 pounds) Shelby Morrison of Oklahoma City University/Aries Wrestling Club. Black finished 7th for the tournament and earned a qualifying spot for the Senior World Team Trials!

Lauren Louive of Massilon, Ohio and currently residing in Iowa City, wrestled for University of the Cumberlands in Williamsburg, KY from 2008-2013. She is a 4-time WCWA All-American and current volunteer Assistant Wrestling Coach at Cornell College (Mount Vernon, IA).  Louive was a 2012 Senior Pan American Silver Medalist at 67 kg and is currently ranked #7 (USA Wrestling-58 kg/128 pounds). Louive is training out of the Hawkeye Wrestling Club in Iowa City.

Louive, who was also seeking to qualify for the Senior World Team Trials, began the day with a 0-10 techfall loss to #1 ranked (WCWA 136 pounds)/ #3 ranked (USA Wrestling-58 kg/128) Kayla Miracle of Campbellsville University/Sunkist Kids. Louive followed that up with a 9-6 win by decision over fellow Iowan #5 ranked (USA Wrestling-55 kg/121 pounds) Megan Black and a 0-11 techfall loss to #2 ranked (USA Wrestling-58 kg/128 pounds) Randi Beltz of Titan Mercury. Louive finished the day with a win by forfeit over Trinity Griffin of Sunkist Kids. Louive finished 5th for the tournament and also earned a qualifying spot for the Senior World Team Trials!

Watters began the tournament with a 7-3 win over #8 ranked (WCWA-155 pounds) Andrea Sennett of McKendree University. In her second match, Watters gave up a 0-11 techfall loss to #1 ranked (WCWA-155 pounds)/#1 ranked (USA Wrestling-69 kg/152 pounds) Tamyra Mensah of Wayland Baptist/Titan Mercury. Watters sustained an injury during the match and gave up injury forfeits for her remaining two matches taking 6th for the day. Watters qualified for the Senior World Team Trials at Body Bar (Junior World Team Trials) last May as well as the NYAC/Bill Farrell Memorial International Tournament (November 10)!

Be sure to root on Iowa’s collegiate women January 5-6 at the NWCA (National Wrestling Coaches Association) Multi Divisional National Duals in Fort Wayne, IN.

Highlights from our High School girls since our last update include a couple impressive 106 pound varsity wrestlers from Eastern Iowa:

Don’t forget to mark your calendars for the South Dakota State University Girls Intensive Wrestling Camp June 11-17 at SDSU in Brookings, SD. The camp will be run by USA Wrestling Women’s National Team Coach, Terry Steiner and SDSU Head Coach, Chris Bono. These coaches are highly respected leaders in the wrestling community who have stepped up to support the growth of wrestling and the growth of girls wrestling. They are creating opportunities for our wrestlers to receive solid coaching and see exponential growth in technique, mindset, and the fundamentals of wrestling.