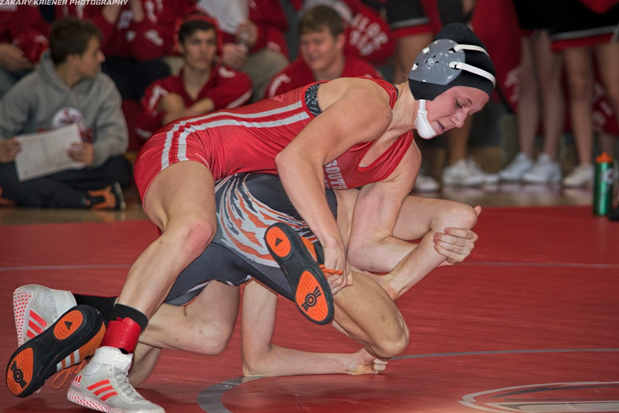 Both the college and high school seasons are well under way for our Iowa wrestlers and we have had some great competition leading up to the holidays. As mentioned in last week’s Iowa High School Girls Wrestling Preview, the growth in participation among Iowa’s females has been impressive.

It is important to note that four additional wrestlers have been added to the rosters and there are now 89 female wrestlers on high school teams in the state of Iowa. That is a 35% increase over last year’s 66 female participants!

On December 8th, Watters picked up a 10-0 tech fall win over Petra Felix of Bacone College. Watters is currently ranked #6 at 69 kg in the USA Wrestling Senior Rankings (November 16) and ranked #5 at 155 pounds in the Women’s Collegiate Wrestling Association (WCWA) College Rankings (December 6). Watters’ record for the season improved to 17-3.

Karleigh Shuff of Indianola was cleared to wrestle and had her college debut as a 155 pound freshman for Lindenwood University-Belleville. Shuff battled hard but gave up a loss by pin to Jacinta Paunuli of Wentworth Military Academy.

The next opportunity to follow Iowa’s college and senior-level women will be the U.S. Senior Nationals, December 17 – 18 in Las Vegas, NV. Iowans Megan Black of McKendree University, Lauren Louive of the Hawkeye Wrestling Club and Rachel Watters of Oklahoma City University will be competing.

The high school wrestlers are a couple weeks into the season and we have seen some great competition already. Some highlights include the following varsity performances over the past two weeks:

Chloe Clemons, a freshman from Center Point-Urbana picked up a 53 second fall, a fall at 2:32, an 8-5 decision and a forfeit in week one of varsity wrestling. In week two, Clemons picked up 2 additional forfeits bringing her varsity record to 6-2 for the season.

Alaina Sunlan, a freshman from Monticello captured a first-period fall at 1:25 and a forfeit to go 2-2 at varsity for the first week and 0-3 at JV. In week two of competition, Sunlan picked up another fall to go 1-2 for the week. Sunlan’s varsity record stands at 3-4 for the season and 0-3 for JV.

Felicity Taylor, a junior from South Winneshiek and the returning Upper Iowa Conference 106 pound Champion, went 5-1 in the first week of competition with a first period fall at 1:54, a 3-1 decision and 3 forfeits. In week two Taylor picked up a pair of decisions (9-4, 5-2) and 3 forfeits. Taylor’s varsity record is 10-3 for the season.

Keagan King, a sophomore from South Central Calhoun went 1-3 for the first week, picking up a 28-26 action-packed decision. In week two of competition, King picked up a forfeit, bringing her varsity record to 2-3 for the season.

Brittany Shumate, a junior from Woodbine, won by first-period fall (:45) and picked up a forfeit to go 2-6 in week one of competition. In week two, Shumate went 0-2 bringing her varsity record to 2-8 for the season.

It is already an exciting year for our wrestlers and there will be plenty of opportunities to come out and show your support. We will continue to bring you timely updates throughout the season!