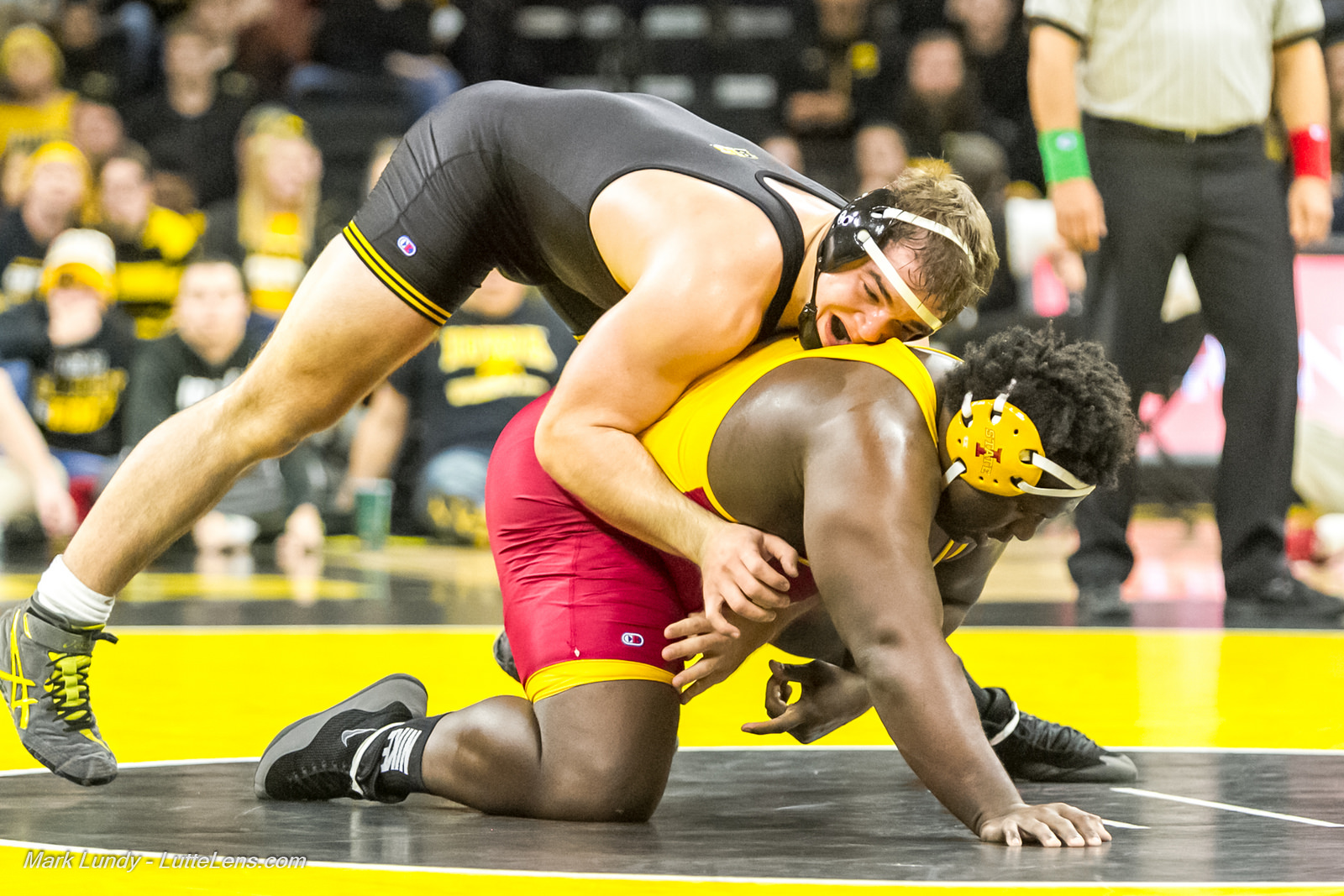 For the first time in several weeks we find ourselves in a week without college wrestling. During this lull in the action we decided to run a team by team recap giving opinions on how each weight has looked through the first month and a half of the season.

Even though redshirt freshman Joey Gunther is off to a 10-0 start to the season, it still feels like Tom Brands is leaving the door open on the possibility that true freshman Alex Marinelli will have his chance to win the spot this season for the Hawkeyes. Brands traditionally redshirts all of his true freshman, save for Nathan Burak four seasons ago, which would put Marinelli in unique company.

You have to hand it to Gunther who has stepped up for the Hawkeyes when they were looking for someone to replace senior Patrick Rhoads, a NCAA qualifier a season ago. He hasn’t been flashy, but in his last three duals Gunther has won his first Big Ten conference match, taken out SDSU veteran Luke Zilverberg, and last week he defeated Iowa State’s Dane Pestano, who was ranked earlier in the season.

In actuality we still don’t know what the Hawkeyes have at this weight. Gunther has answered the call each time out, but still lacks a marquee win. The same can be said of Marinelli, who has weighed in each of the last three dual meets for the Hawkeyes, but hasn’t actually competed since the first week of the season at Grand View. All will be revealed at the Midlands where there is expected to be 10 ranked wrestlers in the field, including #1 Isaiah Martinez (Illinois) and #3 Isaac Jordan (Wisconsin).

Alex Meyer will enter the Midlands with a 9-0 record, but perhaps more importantly is riding a very positive streak. Going back three duals, Meyer opened up his offense and picked up his fourth technical fall against Division I competition since becoming the starter last season. He followed that win with back-to-back decision over ranked opponents, which all adds up to Meyer being as good as it gets to start his senior campaign.

Out of all the Hawkeye starters, Meyer has likely faced the toughest competition (the caveat being Phil Laux is not really the true starter for Iowa at this time, but he’s actually had the toughest row to hoe thus far) and so far he has met that challenge and come out on top in every occasion. Still Hawkeye fans will be wanting more from Meyer to keep the hopes of a team title which means this weekend will be the chance Meyer can use to springboard going into the Big Ten dual season.

His Midlands bracket could feature as many as nine other ranked opponents with the big prize being Arizona State’s #4 ranked Zahid Valencia. Meyer has placed third in each of the last two seasons at the Midlands.

Stop me if you have heard this one before, but Sammy Brooks is off to a red hot start for the Hawkeyes carrying an undefeated streak, including bonus wins in every match, into the Midlands. If this sounds familiar it’s because that is pretty much how every season has started for Brooks since he took over the starting job back in the 2014-15 season (his decision victory last year against Rutgers’s Nic Gravina is the only match Brooks has failed to win by bonus before the Midlands since he took over the starting role).

Yet here we are once again with Brooks racking up points, looking as sharp as ever heading into the Midlands. It’s there where we expect things to get interesting, with 10 ranked wrestlers in the Midlands field (with Brooks) including three wrestlers ranked ahead of Brooks. The top seed should be #2 TJ Dudley, whom Brooks defeated in the Big Ten finals last year. We could also see the Hawkeye All-American get his first crack at Myles Martin (Ohio State) and Nate Jackson (Indiana) who both competed at 174 pounds a year ago.

With 184 pounds being potentially one of the toughest weights in the country, Brooks could beef up his March resume with a few marquee wins next week.

After bumping up from 184 pounds, redshirt freshman Cash Wilcke’s start to the season has met expectations and potentially exceeded some on the way to his 7-2 start. While it’s true Wilcke hasn’t recorded a big win at 197, his offense has looked good despite going up against bigger competition.

In a weight lacking in elite wrestlers, Wilcke put in a good match against #5 ranked Nate Rotert of SDSU dropping their meeting 9-5. While Wilcke never truly seemed in a position to win, he did manage to score a beautiful double leg takedown against Rotert and was able to get to the legs on multiple attempts. He still needs to finish those attempts, but in the early going his offense appears to pretty solid at a weight that is typically dominated by upperclassmen (only six of Trackwrestling’s top 25 are underclassmen, and only two of those wrestlers make the top 10).

There is the potential that Wilcke will be pushed for his starting spot, but we will address that in the next weight.

There can be no denying that current starter Steven Holloway is wrestling undersized for this weight to begin the year, but the good news for the redshirt freshman is that help could arrive soon in the form of Sam Stoll making his return to the Hawkeye lienup.

Holloway is 5-3 to begin his career as a starter for Tom Brands and after showing little offense in his previous two dual matches, Holloway attempted to go to that offense against Iowa State’s Quean Smith in his last dual. Unfortunately for Holloway, Smith happens to be one of the largest heavyweights in the country and was able to counter all that offense for his own scores in the match. If Stoll is able to return for the Midlands, we will see if Brands’s plan to have Holloway drop back to 197 where he wrestled as a true freshman will be in play.

With the return of Stoll the Hawkeyes would get a huge boost to their lineup, with the sophomore currently ranked #6 by Trackwrestling. The Midlands features several talented heavyweights, but the two biggest tests would appear to be #8 Tanner Hall of Arizona State, and #2 ranked Connor Medbery of Wisconsin. If Stoll wants to make a statement that he is back and ready to roll with the best of them, he is setup for just that next week.