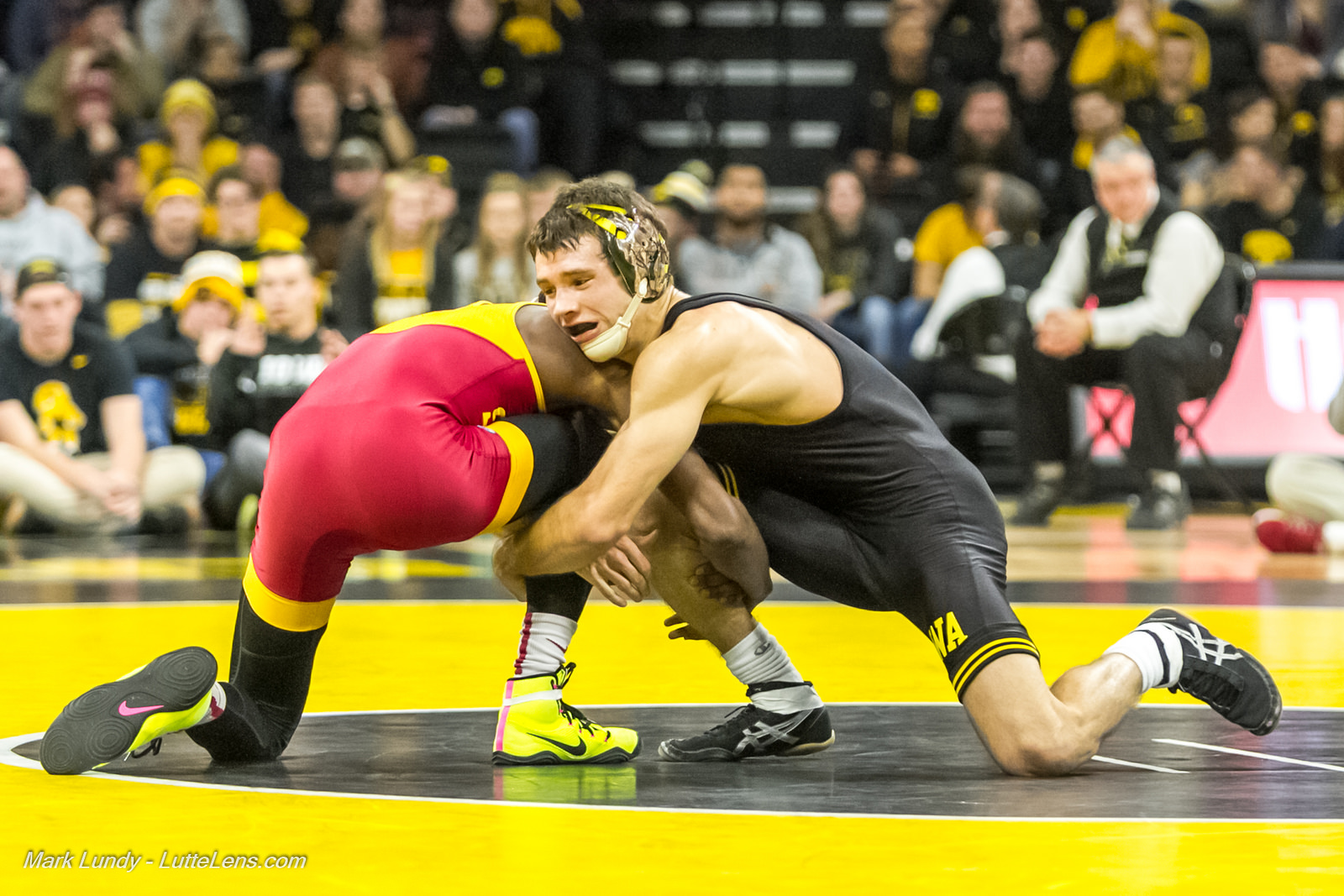 For the first time in several weeks we find ourselves in a week without college wrestling. During this lull in the action we decided to run a team by team recap giving opinions on how each weight has looked through the first month and a half of the season.

Over the past two years Hawkeye fans have come to truly appreciate Thomas Gilman and what he brings to the mat day in and day out. Straight out of the days of Gable, Gilman is the hardnosed, bonus point scoring machine that every team aspires to have in their lineup. It comes to very little surprise that in Gilman’s 8-0 start to the year, he would of course have all of those wins coming by way of fall or tech fall.

To be fair to the Gilman naysayers, the competition hasn’t been all that stellar, but Gilman is a victim of only being able to wrestle who is in front of him and how he is winning his matches is exactly what you would expect out of a NCAA favorite.

Up next for Gilman will be the Midlands where he has made three straight finals appearances and has come out on top on two occasions. This will be his first dealing with ranked opponents on the season though last year Gilman won two matches by bonus at the Midlands before finishing with two regular decisions.

It was a rough start for two-time NCAA finalist Cory Clark who started the season 7-0, but has missed each of the last two dual meets due to an undisclosed injury. It’s been stated that ‘if the Big Ten’s were tomorrow, Clark would wrestle’ (most recently by former Hawkeye Matt McDonough on the Iowa vs Iowa State BTN Plus broadcast) which has alleviated some worry that Clark’s injury will put his title hopes in jeopardy. While we have yet to be assured when Clark will return, head coach Tom Brands has projected a level of confidence that when the time comes his senior will be ready.

In his stead Phil Laux has filled in going 0-2 to top ranked opponents in his two dual starts. Over his career Laux has wrestled a majority of his matches at 125 pounds, so he may be a little bit on the small side for this weight, but assuming he gets one of Iowa’s Midlands invites (which he probably should) we will get a better gauge on where he stands.

Speaking of the Midlands, this weight looks to be a good preview of things to come in March with Ohio State’s Nathan Tomasello and Oklahoma State’s Kaid Brock the only two major heavy hitters missing from the field.

It was expected to be a competition between redshirt freshman Vince Turk and senior Topher Carton to win this spot to begin the season, but shortly after the Hawkeye season opener at the Luther Open, Turk sustained an injury that left Carton as the man for the job. That’s not to say Carton hasn’t done his part to keep said job.

Off to a 10-0 start to the year, Carton has scored bonus in eight of his matches with teammate Paul Glynn and Iowa State’s John Meeks being the only two to hold him to a decision thus far. Carton is currently ranked #24 by Trackwrestling, but the Midlands will be Carton’s first opportunity to make a statement on the season with as many as four top ten ranked wrestlers expected to be in the field and several more from Trackwrestling’s top 25.

Junior Brandon Sorensen is truly unique in that he is just as consistent as teammate Thomas Gilman when it comes to your confidence on him winning a match, but the lone knock on him is his slow starts that you normally don’t expect from a returning NCAA finalist. Brands has made a few comments in interviews over the last few seasons that they would like their junior to pull the trigger more often in the first period in hopes to jump start his offense.

And while Sorensen may be a slow starter, he has shown the ability to pour the points on late to rack up bonus point wins for his team. In his last dual he overcame a slower first period to end up with a major decision over Iowa State’s Chase Straw in what was his ninth bonus win on the season. He did experience a bit of a scare against SDSU’s Alex Kocer, but managed to score a reversal and two near fall late to come out on top in his match. Sorensen lacks the flair of Gilman, but so far he’s continued to put up wins for this team.

Up next is a big week for Sorensen, who is looking to join the Midlands “20-in-4” club where wrestlers are able to record at least 20 victories in their first four Midlands. Sorensen doesn’t need to go particularly deep to reach the club, sitting at 18 wins entering next week. Other Hawkeyes in the club are John Bowlsby, Barry Davis, Joe Williams, Mark Ironside, Wes Hand, Jody Strittmatter, Doug Schwab, and Cliff Moore. Former Hawkeye head coach Dan Gable was the first member of the 20-in-4 club back in 1966-69.

Redshirt freshman Michael Kemerer is off to a 10-0 start to the season, has defeated two of Trackwrestling’s top 25, and is ranked #5 in the nation. All of that leads to plenty of encouraging signs for Hawkeye fans when looking at their 157-pound spot in the lineup.

However, in his last time out, Kemerer displayed the first worrisome moment of the season when he took an early lead on Iowa State’s Colston DiBlasi, then faltered late to win by the narrow margin of 8-7. In the match Kemerer was warned for stalling twice, which rightfully raised a few eyebrows of concern. Upon re-watch, it appeared to me that Kemerer expended a lot of energy when trying to lock up a cradle on DiBlasi early in the match. After that moment Kemerer sort of had an adrenaline dump leaving him gassed for the rest of the match.

We’ve witnessed this type of occurrence before, with the most recent example coming to mind being Sorensen’s match against Iowa State as a freshman where he squeaked by 7-6 against Gabe Moreno in what was his Carver debut. While Hawkeye fans may be clamoring for Kemerer to be a finished product, the positive takeaway is that there is still some room for growth.

This should be a big week coming up for Kemerer who will have several ranked wrestlers in his bracket including the man in front of him, #4 Tyler Berger of Nebraska. He could also run into former high school teammate Josh Shields who is now at Arizona State. Unfortunately due to injury former top ranked wrestlers Richie Lewis (Rutgers) and Max Rohskopf (North Carolina State) will be absent.