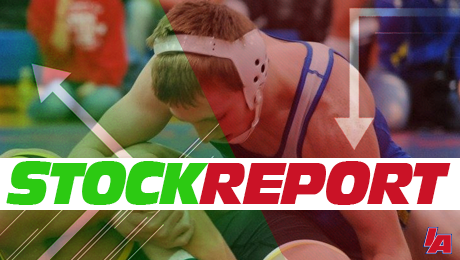 New Hampton- The Chickasaws came away with an Independence Tournament Title this past weekend. They bested 24 other teams over the course of the two day tournament including finishing 26 points ahead of the second place Fort Dodge. Oh, and did I mention they did all of that without state champ Michael Millage in their lineup? Millage is still sitting out 90 days due to Iowa’s transfer rule. New Hampton placed 9 of 14 wrestlers inside the top eight. While they did only come away with one champion in Ryan Gorman at 160lbs, New Hampton did put four other wrestlers in the finals.

Connor Corbin (WDM Valley)- All Corbin did this weekend was knock off three ranked wrestlers on his way to a Keith Young Title as well as an Outstanding Wrestler Award in Cedar Falls Saturday night. Valley’s 195lber took out 1A #5 ranked Walker Even (Don Bosco) 9-3, 2A #1 ranked Bryce Esmoil (West Liberty) 5-2 [match video], 3A #4 ranked Kaden Sauer (Dowling) 6-4 in OT (he beat Sauer earlier in the week as well). He also helped Valley take home the team title, finishing 61.5 points ahead of Waverly-Shell Rock. Corbin will be looking to improve on a fifth place finish at last years state tournament and he is well on his way to accomplishing that so far this year.

Gable Fox (Don Bosco)- Fox wrapped up a nice little opening week of the season with a Keith Young Title at 126lbs on Saturday. Gable used a 5-2 decision over Denver-Tripoli’s #3 ranked Riley Wright in the semis to reach the finals where he won a very entertaining match over Spencer Hutchinson of WDM Valley 7-6 [match video]. Throw in his comeback victory on Thursday over defending 106lb state champ Donny Schmit of Wapsie Valley and he finds his stock rising after week one of the high school season. It was a red letter day for #TeamTriangle

Keith Young- Alright, before I get ripped let me preface. This tournament is still a top 10 tournament in Iowa, but it’s not what it has been in years past. It use to be impossible to find a seat once action started, but on Saturday there were open seats throughout. Independence over took the Keith Young for biggest tournament on week one of this season. The atmosphere wasn’t there this year like it has in years past with huge matchups including Thomsen/Stroker or Steiert/Racer where the entire gym was into it. Throw in the fact that they still can’t figure out a way to get a scoreboard for mat #3 that more than half of the gym can see and you’ll find your stock dropping.

Brandon Sorensen- The Hawkeyes 149lber didn’t have a terrible week, he did go 1-0 after all. He just looked a little uninspired with his 9-5 win over unranked Alex Kocer of SDSU. The match ended up being even closer than the score indicated. Sorensen finds himself on the stock down section because he is a victim of his own success. He’s kind of in this wrestling purgatory where Hawk fans will expect him to reach the NCAA Finals again, but he has a lot of ground to make up on #1 Zain Retherford of Penn State. I’d be willing to chalk this up as one off night, but it still came as a bit of a shock.

Alburnett- To be fair to Alburnett, it would have been tough for them to go up after winning both the traditional and dual titles last year at state. They started their season on Thursday with two dual losses to Lisbon and North Linn as well as 9th place finish at the Independence Tournament. Alburnett is still trying to get their lineup squared away and heal up some injuries, so there will be better days ahead. Assuming they get healthy they still will be favorites to take home the 1A traditional title in February, but duals might be a different story.