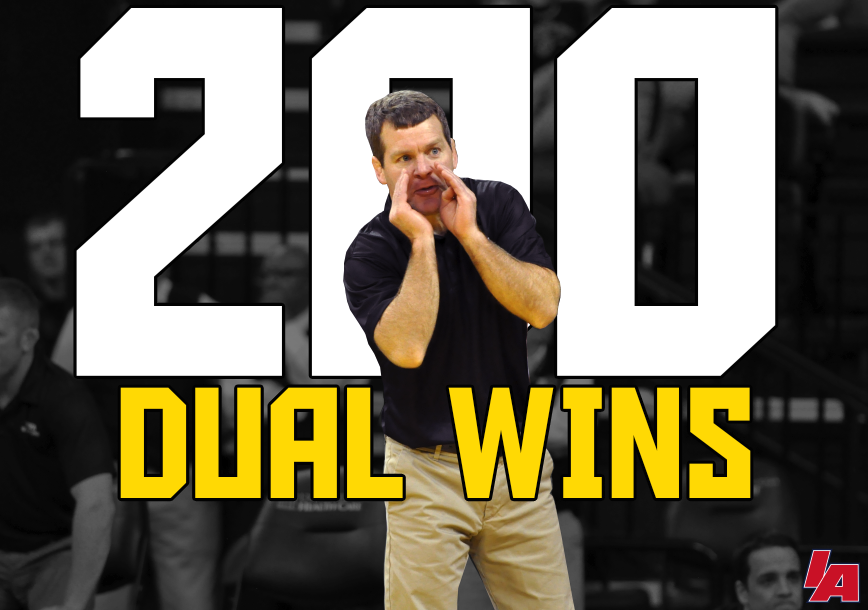 It was a big night in South Dakota for Tom Brands and the Hawkeyes as Iowa moved to a perfect 4-0 with their 29-8 win over South Dakota State. The dual victory was also the 200th career win in Brands’s career, which covers 13 seasons at both Iowa and Virginia Tech.

It was a slow and steady start for the Hawkeyes as they opened the dual with four straight decisions over their Jackrabbit opponents to build a 12-0 lead. Things got started at 149 pounds with Brandon Sorensen having a rematch with Alex Kocer, whom he majored in last year’s dual meeting. This time proved to be a much tighter decision, as Sorensen needed late reversal and suckback near fall points to finish his win 9-5 for the Hawks first win on the night.

From there Iowa got back-to-back wins from their redshirt freshmen Michael Kemerer and Joey Gunther at 157 and 165 pounds respectively. Kemerer jumped out to an early 2-0 lead in his match by scoring off the opening whistle. It would take until the end of the third period for any separation in the match, but Kemerer was able to win his first ever ranked varsity match, 7-3 over #18 Collin Holler. Gunther’s match wasn’t any easier as he won by a takedown margin, 6-4 over Luke Zilverberg.

At 174 Iowa took the second and final ranked head-to-head matchup when #6 Alex Meyer was able to down #18 David Kocer by a score of 4-1 to push the lead to 12-0. After that they got their first bonus victory on the night with #7 Sammy Brooks earning a match ending technical fall in the second period over Martin Mueller, 20-5.

The Jackrabbits were able to get their first of two wins on the night at 197 where #4 ranked Nate Rotert proved to be too much for redshirt freshman Cash Wilcke, winning 9-5. Despite losing the match, Wilcke was able to time a beautiful straight on double in a first period takedown.

Things got back into Iowa’s favor with redshirt freshman Steven Holloway picking up a 3-2 victory over fellow Iowa native Alex Macki at heavyweight. Thomas Gilman kept his season long bonus streak alive with a 26-11 technical fall at 125.

It was hyped across the country all week, but Seth Gross was once again able to earn a victory over his former team downing Phil Laux by technical fall at 133 pounds for the final South Dakota State win of the evening. Topher Carton closed the dual out with a 12-1 major decision over Iowa native Henry Pohlmeyer at 141.

Up next the Hawks return home to host instate rival Iowa State for the Cy-Hawk series on 12/10. Iowa will be favored to keep their winning streak against the Cyclones (which I believe stands at 11) alive when Iowa State comes into Carver. Other interesting dual notes include Alex Marinelli weighing in for the first time in a dual situation at 165 pounds, and Sam Stoll weighing in for the second straight week.