Graceland came from behind last night to defeat Doane College 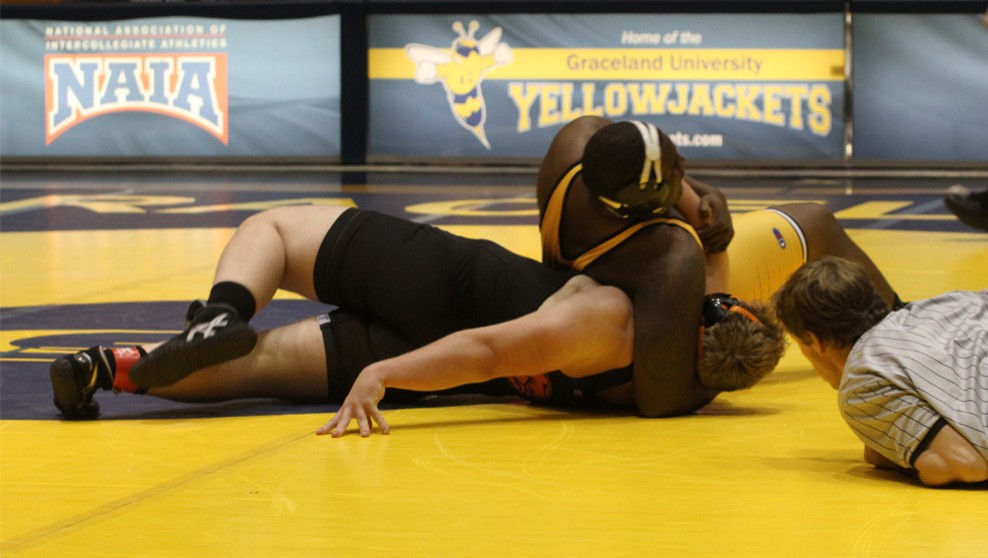 LAMONI, IA –  The wrestling team picked up their third win of the season, taking down Doane University in a close dual, 28-25.

“I can’t begin to put into words how proud I am of this group. This dual turned out to be such a roller coaster ride, but at the end all 10 guys kept believing in the work they had put in and that it could and would result in a win tonight,” said Head Coach Zack Mullins.

Coulter Allen gave Graceland the lead back, winning by fall (4:54) over Drew Ratkovec at 157 lbs.

The Tigers then came surging back to take the next three matches. At 165 lbs., JohnMark Reddict won by fall (4:22) over Dakota Britt to even the dual at 16-16. Zach Linton (174 lbs.) then defeated Matthew Victor by fall (4:22) to give the Tigers their first lead of the night. Kyle Hoffman (184 lbs.) then marked a decision (7-5) win over Zach Kraus. Doane led 25-16 heading into the final two matches of the night.

With their backs pinned against the wall, Ryan Paige (197) and William Samuels (285) earned victories. Paige won by fall (2:54) over Herold Hudiburgh and Samuels won by fall (0:48) as well over Jacob Smith.

The Yellowjackets claimed the dual 28-25, improving to 3-1 on the year.

“Hats off to Doane, they came ready to battle and made us earn each and every win. I tell the team often, “it doesn’t have to always look pretty, sometimes it just has to work” and tonight with our backs against the wall late, these guys made it work,” continued Mullins. “Two milestones in our program early in the season, our first shutout and first 3-1 start; as long as these guys keep working hard and trusting in themselves and the process, it will continue to be an exciting season!”

The Jackets will compete again on Saturday, Dec. 3 at the Buena Vista Open.