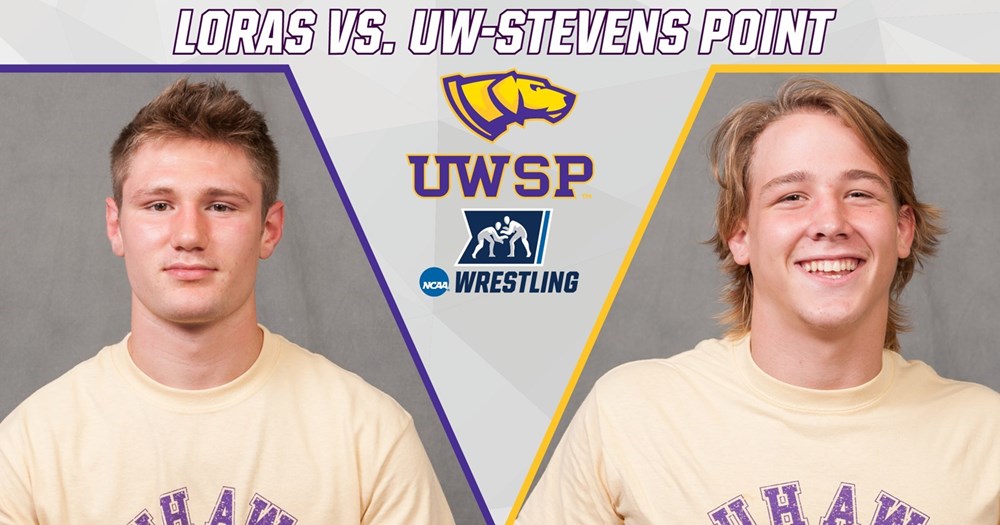 DUBUQUE, Iowa (Duhawks.com) – The Loras wrestling team posted a convincing win in its first dual of the season, besting UW-Stevens Point on Saturday afternoon, 30-12. Led by a corps of freshmen in Clint Lembeck, Guy Patron Jr. and Eddie Smith, the Duhawks won eight of 10 bouts, including a victory at 174# over the Pointers’ returning NCAA National Champion.

MOMENTS THAT MATTERED
133# | In his first bout of the season, returning national qualifier Michael Triplett used a second period reversal to turn the momentum before erupting for six third-period points, including a four-point near fall, winning 10-4 over Michael Bannach of UW-Stevens Point

141# | Lembeck continued where he left off at the UWP Super 8 Invitational, winning his fourth match of the year by technical fall, scoring all 16 points in the first period. Fourteen of the 16 points Lembeck scored were by near fall as the Xavier graduate improved to 5-0 on the year.

149# | Freshman Kalik Battle jumped up two weight classes to wrestle on Saturday and did not disappoint, winning a closely contested battle. Trailing by one entering the third period, Battle scored an escape and took the lead with a takedown to win 3-1.

174# | Facing last year’s NCAA Division III National Champion, Smith paid no attention to the hype and jumped out to an early 6-1 lead on Logan Hermsen by way of two takedowns and a two-point near fall. Smith conceded a takedown in the second period and a reversal in the third, but maintained his advantage to improve to 4-1 on the year.

197# | Building off of last week’s win over No. 4 Matt Seabold of Central, Patron Jr. opened a 6-1 lead over Dylan Diebitz with a pair of takedowns and a two-point near fall. The only points he conceded were on escapes as he romped to a 13-5 major decision.

WRESTLER OF THE DAY
Eddie Smith | In his first collegiate dual, Smith performed on the stage when no one outside of his own coaching staff gave him a chance. The Prairie du Sac, Wis. native jumped out to an early lead, potentially catching his opponent off guard, and held firm with his defense to win, 7-5.

UP NEXT
The Duhawks head to Mequon, Wis. next week for the Concordia Wis. Open.