Simpson rolls to 35-6 win at Graceland 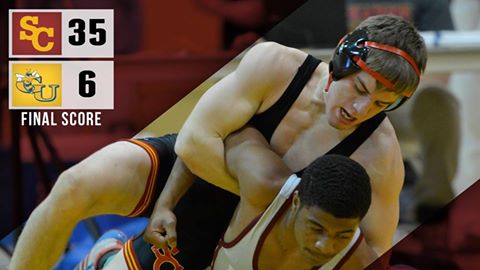 The Storm (1-1) won 8 of 10 matches to win their first dual meet of the young season. Simpson picked up six bonus-point wins in the rout.

“Overall, we looked like a different team than last week,” head coach Nate Hansen said. “It was a lot of fun having our first two weights step up and earn come-from-behind wins. That set the tone.”

Fenzl trailed Kruz Adamson 10-6 after two periods at 125 pounds but scored three takedowns in the third to force overtime. He added a fourth takedown 31 seconds into the extra period to get the crucial win.

Irwin trailed 5-4 after the first period at 133 before pinning Dash Mann with 10 seconds left in the match, earning the first pin of his career.

Kiehne moved to 2-0 with two pins when he earned a third-period fall over Austin Pontier at 149 pounds. A junior, Kiehne now has 13 career wins, 12 of which have been by pin.

“I’m very happy with tonight’s result but I’m not satisfied with where we’re at,” Hansen said. “We will get back to work tomorrow and keep improving.”

UP NEXT
The Storm go to the Luther Open on Saturday, Nov. 12.