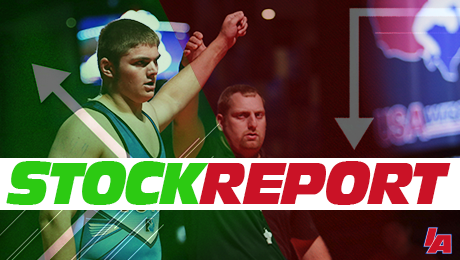 Every week during the wrestling season we will be doing a “stock report” This will highlight some of the top performing individuals and teams from the previous week as well as some wrestlers or teams who had a rough week.

True freshman Kanen Storr (ISU) and Alex Marinelli (Iowa)- Both Wrestlers picked up titles at the Grand View Open this last weekend in the Open Division. Storr picked up a win over UNI’s Jake Koethe in the quarterfinals 8-4. The match everyone was looking forward to between Marinelli and Cooper Moore of UNI didn’t end up happening as Moore had to medical forfeit out of the tournament. Marinelli’s performance only begs one question, can Tom Brands really read minds? This probably will not be the stiffest competition these two face all year, but it was still a good start to their college careers.

Spencer Trenary (Clarion-Goldfield)- Won the 9th/10th division and finished runner-up in the 11th/12th division. Trenary needed two decisions and a fall to win the 9th/10th division. He used 3 falls and a decision to reach the finals of the 11th/12th bracket before dropping the last match by a close 3-1 decision in sudden victory. Trenary is a Sophomore at Clarion-Goldfield this season.

Patrick Downey (ISU)- Downey, who is ranked #6 at 184, bumped up to 197 on Friday to take out #11 Nathan Rotert of SDSU. Downey won the match 8-6. It looks like Patrick has carried the momentum from last seasons 5th place finish at 197 from last years NCAA’s into this year. Down a weight to 184 this year, we should see more great things out of Downey. He also picked up a fall in the North Dakota State meet.

Iowa State- The #13 Cyclones fell 27-9 to South Dakota State on Friday followed by a 24-16 defeat to North Dakota State on Sunday. Iowa State is far from full strength so don’t abandon ship yet, but two tighter duals would have felt a little better to start out week #1.

Iowa misses out on Brady Berge- This week Berge verbally committed to Penn State. Flowrestling has Berge as the top ranked 160lber in the nation. He is a two time Minnesota state champ as well. Iowa will be ok without him, but it still hurts anytime a recruit chooses your rival school over you.

Jake Koethe- Koethe came into the Grand View Open as a top 20 wrestler and UNI’s projected starter at 141lbs. He suffered two losses on Saturday, first losing to Storr of ISU and then losing by tech fall for 3rd. Koethe finished last season strong with two wins over NCAA qualifiers in Abidin from Nebraska and Bleise from Northern Illinois. Koethe has done enough great things in his career to chalk this up as an off day, but it was still a rough first weekend.