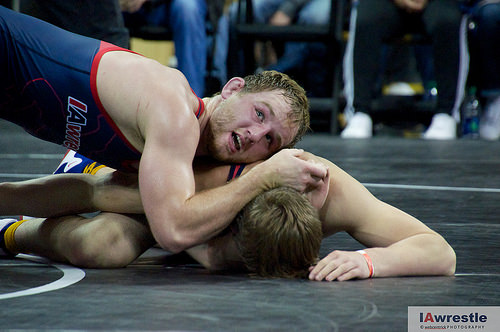 IAwrestle has obtained a list of Hawkeyes that will be attending the 2016 Grand View Open. A total of 10 wrestlers from Iowa will compete at the open, with three of those wrestlers competing in the Open division.

All eyes will be on Alex Marinelli as he makes his college debut up at 165 pounds along with Joel Northrup in the Open division. Marinelli was listed on the Hawkeye roster at 157 pounds and is projected by many to be a strong contender for the 165 starting spot for Iowa this coming season. Also competing in the Open division will be recent roster addition Stephen Alvarez at 141 pounds.

The Freshman division will feature many of the Iowa’s top recruits from the 2016 class including Iowa natives Carter Happel, Brock Rathbun, and Jack Wagner. All three wrestlers were nationally ranked coming out of high school and will get their first taste of college wrestling this weekend. Rathbun and Wagner are listed as 125-pound wrestlers on the roster, but will make their debut up at 133. Happel will begin his season at 141, where many think he can be a factor for the Hawkeyes in the future. Former Glenwood standout Matt Malcom will be entered at 157 pounds, and is coming off a strong summer of freestyle results.

The Freshman division will also feature Kaleb Young and Tristan McDonald at 165 pounds, and Nebraka prep Cade Brownlee will compete at 184 pounds. Young is listed at 174 pounds on the roster, but will start his season down a weight.

IAwrestle will provide more team info as it comes available.

One thought on “Hawkeyes headed to Grand View Open”