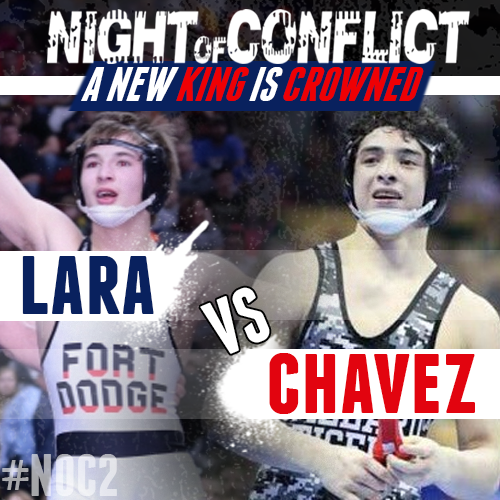 In the next Night of Conflict match announcement we are happy to announce that one of the state’s top senior talents Triston Lara of Fort Dodge will compete in a matchup against the nation’s #17 ranked wrestler Niko Chavez.

For Lara, this match presents an opportunity to prove himself as one of the nation’s best. A three-time state medalist for Fort Dodge, Lara was finally able to reach the top of the podium by winning 3A’s 126-pound crown this past February after taking fourth as a freshman and second as a sophomore. Lara has always been a big name in the state of Iowa, being tabbed as IA Wrestle’s seventh best wrestler in the class of 2017 and was ranked eighth in the IA Wrestle Fab 50 rankings – which included wrestlers from the 2017, ’18, and ’19 classes.

Coming up from Missouri will be Chavez, who is a highly accomplished wrestler out of Willard High School. Most recently Chavez was the seventh place medalist at UWW Cadet Freestyle Nationals in Akron, Ohio but he has also claimed top finishes at Corn Cob Nationals, Southern Plains, and USA Wrestling Folkstyle Nationals. Chavez is also a three-time Missouri state medalist, claiming gold this past year.

ANNOUCED MATCHUPS FOR NIGHT OF CONFLICT:

ABOUT NIGHT OF CONFLICT:

The IA Wrestle Team is proud to announce that this October we will be hosting a premier wrestling event titled “The Night of Conflict 2”, and will pit some of the best talent that the country has to offer in a head-to-head battle for supremacy of each weight class. The event is scheduled for October 14, 2016 in Carver-Hawkeye Arena and it will take place the day before the preseason tournament, the Conflict at Carver, whose proceeds directly benefit the Hawkeye Wrestling Club. The dual will be broadcasted on FloWrestling.

Your tickets will be scanned for entry and no reentry will be allowed. Each individual will need to print their ticket. *You can purchase as many as you like but make sure you print each ticket for entry*

*Wrestling lineup is subject to change*