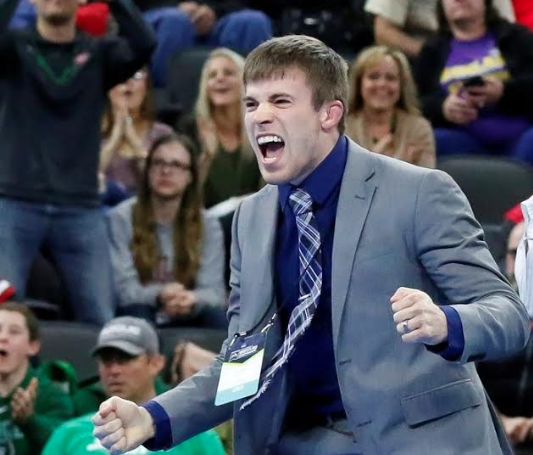 Kearney, Neb. – Nebraska-Kearney Director of Athletics Dr. Paul Plinske announced today that head wrestling coach Marc Bauer is stepping down to become an assistant professor in UNK’s Kinesiology and Sport Sciences Department and to pursue a Doctorate in Interdisciplinary Leadership from Creighton University.

Bauer, who hopes to become a full professor in the near future, will remain involved with a program that will now be led by Dalton Jensen. An Iowa native and 2012 national champion for the Lopers, Jensen was promoted to associate head coach last fall.

Coach Jensen will name a head assistant coach at a later date, but Kearney wrestling legend Tom McCann and graduate assistant Zac Ondrak will round out an impressive coaching staff.

“Marc and I talked extensively for the past year and a half about his future professional aspirations,” Plinske said.  “In working with him, it was always my goal to help him attain his goals and dreams. Marc has been a leader of one of the most successful wrestling programs in the country. He is a builder of men and a maker of champions. Knowing that we may lose him at some point to other professional opportunities was a concern of mine, but I’m thrilled that he is staying close to the program to help us transition Dalton to the head role.”

Taking over as head coach prior to the 1999-2000 season, Bauer has turned the Lopers into a national power. The Kearney native led UNK to three NCAA Division II national titles (2008, 2012 and 2013), five national runner up finishes and 14 conference and regional titles.

During the dual season the Lopers have gone 218-81 since 2000, including five wins over Division I members.

Under Bauer’s leadership, 89 of his wrestlers earned All-American honors, including 22 national champions and 15 national runners-up. One of those All-Americans and national champions, Tervel Dlagnev, will compete in the Summer Olympics next weekend. The heavyweight was named the inaugural Division II Wrestler of the Year in 2008.

“Marc and Dalton have established an outstanding program and the new leadership structure will keep this program on track for continued greatness. I could not be more excited for Marc and his new professional endeavors. Equally so, I’m fired up to work with Dalton as he begins this new chapter of his already outstanding career,” said Plinske.

The Missouri Valley, Ia., native began his collegiate career at Iowa State where he was a 2010 NCAA Championships qualifier. As a junior for UNK, he was a national runner up at 141 lbs., going 30-5 with a team-best 10 falls.

In his senior season, Jensen helped the Lopers win its second team national title by winning the 141 lbs. class. Posting a 30-4 mark, he finished his career with 11 straight victories, capped by a fall at 4:18 in the national title match.

He and his wife, Brenda (Petersen), live in Kearney.

Coach Bauer’s Comments
… on the timing of this decision

“I have been blessed with the opportunity to be the head coach of the UNK wrestling program for 17 years.  During that time, this program has flourished with amazing student-athletes and coaches coming together with the common goal and expectations of winning championships.  I still feel young in years, and have always been driven to further myself and my education.  To me, learning never ends.  I have 18 years of successful public school teaching and 21 years of successful college coaching experience. My experience combined with additional education and growth and knowledge of leadership, I feel I have even more to offer the coaches, student-athletes, and the KSS department at UNK.

I don’t look at what I am doing as stepping away.  I see this as an amazing opportunity for me to give back more. I will still play an important role in the UNK wrestling coaching staff, I just won’t be putting in all the long hours associated with managing, marketing, and promoting the program. By reversing roles within our staff, I will have more needed time to study, teach, and direct more energy into doing the very best that I am capable of doing.”

.. on his new schedule

“Our staff will be the same next season; however, until I develop a solid routine with my studies and teaching, I will not be as involved with daily practices and team activities.  I will miss the daily interactions and spending time with our guys.  Developing those close relationships with our student-athletes is integral in their development and success.  I like being there for the guys.”

“Dalton has always shown a passion for coaching.  I have asked him to always think as though he were the head coach.  There were many times I would catch him thinking or doing things before or as I was doing it.  I have always been impressed with him on so many different levels.  He does an amazing job of communicating and connecting with our community, administration, alumni, parents, student-athletes, coaches, and potential recruits, which is vital to our success.  His experience as a member of our coaching staff the past four years will serve him greatly.  He fully understands and embodies our team philosophy and mission and strives to keep expectations high.  I have appreciated his ability to make our fundraising efforts more efficient, his drive to connect with our student-athletes intentional, and his ability to embrace and stimulate the culture within our program a priority.”

.. on the transition to Dalton and his coaching staff
“Transitions like this are never easy, but they are inevitable.  If not now, then it will take place in the future.  Change is never the easiest thing in the world, but it can be very healthy for our program.  Dr. Plinske has been an integral factor in this process and smooth transition, and we could not be more pleased with the manner in which he has helped us get to this point.

I want all of our alumni, parents, and student-athletes to know that I am forever grateful and thankful for the opportunity to lead and be associated with the Loper Wrestling Program and Family.  Our expectations for our program will continue to be high as we help provide the best training, competition, and opportunities for everyone to excel at this level.  We will continue to do what it takes to help our student-athletes excel both in the classroom and on the mat.  That’s that “Loper Wrestling Style!”

Coach Jensen’s Comments
… on becoming the eighth head coach in UNK history
“The UNK Wrestling program has seen a wealth of success for over a decade now and I am very honored and blessed to be named the head coach of such an established and rich program.  With any program there is room to improve and my staff and I will continue to build to be the most dominant program in NCAA Division II.  Our program has always been very process oriented and that will continue to be our main focus moving forward. Many people have contributed to this phase of my life in addition to Coach Bauer including my parents, brothers, and most importantly my wife. I’m very grateful for the love and support these people have given me to help me attain this dream job.”

… on Coach’s Bauer’s influence
“The amount I owe to Coach Bauer in my development, not only as an athlete and coach, but as a man is insurmountable. His work ethic, high energy, and compassion are things I think of when I think of Marc Bauer. It’s because of these things he has been so successful, not only in his professional career but also in caring for his family. These are things I strive for as a coach and as a young married man.

This program has not only been sustainable over the last decade, but it has flourished under Coach Bauer’s direction and he has left the blueprints for success in my hands.  Coach Bauer has been a phenomenal mentor for me but an even better friend.  I look forward to continuing to work with him and having his help in developing our student-athletes.”