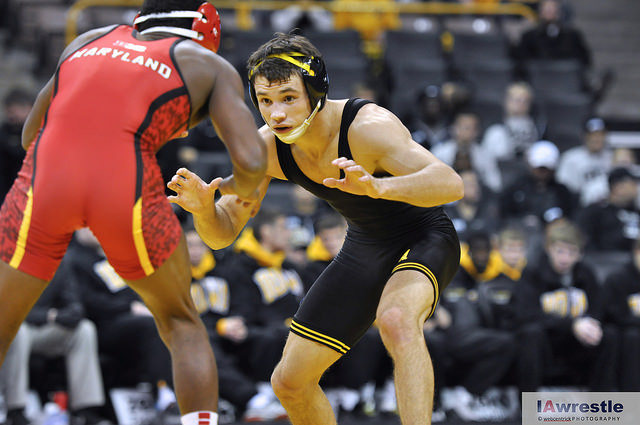 IOWA CITY, Iowa – The University of Iowa wrestling program announced Wednesday that Iowa State, Penn State, and Ohio State are among the five schools the Hawkeyes host this season at Carver-Hawkeye Arena.

The home schedule includes six dates total, including the Iowa Corn Cy-Hawk Series on Dec. 10, and duals against Penn State and Ohio State during the final two weeks in January. The Nittany Lions visit Iowa City either Jan. 20 or 22, and the Buckeyes follow either Jan. 27 or 29. Those dates will be finalized in mid-September when BTN releases its television schedule.

Other home dates include the Iowa City Duals on Nov. 18, Wisconsin on Feb. 3, and Nebraska on Feb. 12. Season tickets are $75 and available for purchase at hawkeyesports.com or by contacting the UI Athletics Ticket Office at 800-IA-HAWKS.

The Hawkeyes open the season Nov. 5 at the Grand View Open in Des Moines, Iowa. It’s the first of two tournaments on the regular season schedule. Iowa competes at the Midlands Championships on Dec. 29-30 in Evanston, Illinois.

The Hawkeyes will compete at the NWCA National Championships Dual Series at a date and location not yet determined.

SCHEDULE NOTES: Start times and broadcast information will be announced at a later date.