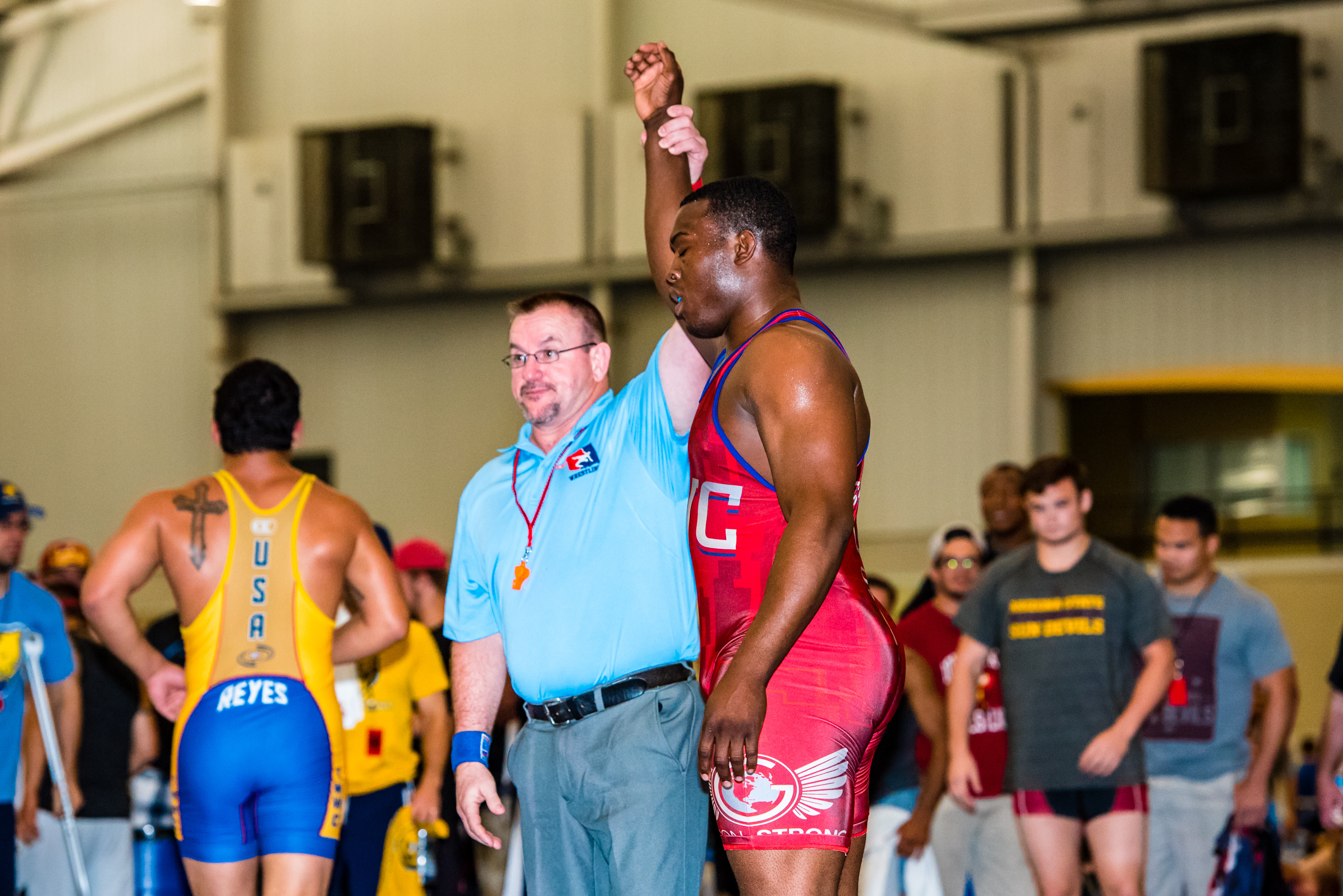 (Photos in this post provided by Sam Janicki – SJanicki Photo)

This past weekend in Akron, Ohio played host to the UWW University National tournament and many college wrestlers from the state of Iowa traveled out in hopes of making a World Team. Iowa saw competitors from their power programs: Iowa, Iowa State, and Northern Iowa, and they also had two smaller division programs attend, Grand View’s Viking Wrestling Club and Coe College.

With so many great performances on the weekend we decided to put together a list of ten wrestlers who put in a notable tournament.

We lead off with what might be the most obvious pick as Gadson was the only wrestler from the state of Iowa to make the University World Team. Competing at 97 kilograms and tore his way through the early part of his bracket, outscoring his competition 44-0. In the finals Gadson faced a more challenging foe, Nikko Reyes of Northern Colorado. Gadson needed to three matches in a best of three series to defeat Reyes, but in his two victories he outscored Reyes 11-3.

Entering this tournament Gadson was the presumed favorite to win and he not only did that, but he put up the kind of wins that one would expect from the caliber of wrestler that currently sits in the middle of the Senior U.S. freestyle rankings. His lone hiccup was the loss by fall to Reyes in match two of the finals, but that is just a small blip in what was otherwise a highly successful weekend for the former Cyclone.

Brooks comes off a strong weekend that saw him take second at 86 kg to NCAA runner-up Morgan McIntosh in the finals. While Brooks was unable to secure a World spot by winning his weight, he still put in a great weekend.

Brooks got his first quality win in the fourth round defeating Central Michigan NCAA qualifier Jordan Ellingwood 11-0. His second and biggest win on the weekend was his semifinal match with North Carolina State’s Pete Renda, who placed third at the 2016 NCAA championships. In addition to his successful NCAA run, Renda also handed Brooks a 7-3 defeat when the two met at the National Duals in Iowa City in February.

Not only was the Brooks victory significant in terms of a quality win, but it also had a revenge factor for possibly costing his team a National Duals victory.

Gadson may have been the only wrestler from Iowa to make a World Team, but he was not the only wrestler to win a University National title this weekend, as Alex Meyer was able to win the 80 kg title by defeating his teammate Burke Paddock by fall in the finals.

Unlike every other weight contested this weekend, 80 kg is the lone weight that is not contested at the University World Championships. However, with the weight is ideal for 174 pound wrestlers and once again we saw Meyer put in a top three performance in Akron after placing third at the weight last summer.

The downside with it being a non-World weight is usually lacks the volume of high level wrestlers, but Meyer was still able to notch victories over NCAA qualifiers Nick Kee (Appalachian State), Austin Trott (Garner-Webb), and Phil Bakuckas (Rutgers) along the way. After earning his first All-American honor as a junior, this national title should continue to show the growth of Meyer.

Going a little unconventional by picking Kemerer over another wrestler who placed higher than he did at the same weight, but at the end of the day Kemerer’s tournament means a little bit more than his teammate Brandon Sorensen’s did.

Getting the obvious out of the way, Kemerer’s big weekend was highlighted by his quarterfinals victory over Anthony Collica who he pinned after leading 10-1 at one point in the match. Collica was the defending 70 kg champion at this weight, and finished fourth at the NCAA championships in March. This win cements Kemerer’s status of being a potential impact wrestler joining Iowa’s lineup and with the result coming at 154 pounds (70 kg) he looks to be in a good position to grow from 149 into the 157-pound weight for Iowa.

Kemerer also scored wins over Arizona State’s Gene Pierce and Central Michigan’s Colin Heffernan, both of which were NCAA qualifiers in 2015.

Kemerer’s teammate Sorensen one upped the freshman by making the finals of the 70 kg weight, defeating Kemerer 4-1 in the tournament semifinals. Aside from knocking off his teammate, Soresen also picked up key wins over Heffernan and also took out former All-American BJ Clagon. Sorensen was fifth at this weight in 2015. Sorensen was then defeated in two straight matches to Adam Hall in the finals. Hall is a wrestler that has fairly significant amount of Senior level experience, so it wasn’t so surprising to see Sorensen go down.

Doug Schwab is slowly building the strength of his freestyle club, and the addition of three-time NCAA qualifier Cabell is looking like a great addition for the RTC. Cabell’s lone loss on the weekend was to eventual runner-up Niko Reyes, who pinned Cabell in the semifinals. Outside of that, Cabell’s biggest win this weekend was over Virginia Tech All-American Jared Haught.

Whether Paddock’s days as a 165-pound wrestler are over remains to be seen, but the one thing that is certain is that the redshirt freshman put in a great performance in Akron by taking second at 80 kg. After trading starts with Patrick Rhoads in the early going of the season, Paddock faded down the stretch (which may have been due to personal events going on in Paddock’s life). Paddock’s big weekend was highlighted by wins over former top recruit Xavier Montalvo (8-8 criteria win) and Penn State NCAA qualifier Geno Morelli (15-4 TF). Paddock then ran into his teammate Meyer in the finals, but his work prior to the finals was certainly noteworthy.

In a bit of a surprise move we saw Hall up at 65 kg this weekend, as opposed to down at 61 kg where he claimed the national title a year ago. There is no doubting Hall’s freestyle abilities, and we saw that in his sixth place finish while potentially giving up a bit of weight (he weighed in at 61.5 kg). He got solid wins over youngster AC Headlee of North Carolina and also won 3-2 over Nebraska’s Colton McCrystal, all while up a weight.

Wilcke was able to place top eight in a fairly loaded 86 kg bracket. He took three losses on the weekend with the first being to McIntosh (the eventual champ), and the last loss being to All-American Nate Jackson of Indiana. The third loss was to two-time Division III national champion Riley Lefever. A great showing from a wrestler that may be challenging for the 197-pound spot in the Iowa lineup.

Ending our list is Straw who put in a notable performance at the 70 kg weight for the Cyclones. As noted on IA Wrestle’s Redshirt Notebook, Straw is an intriguing possibility to challenge for the 157-pound spot in the Iowa State lineup this coming season. After coming out of high school unranked, Straw put up a big 12-1 TF performance over Josh Maruca, who was ranked #55 by D1CW in the same year.