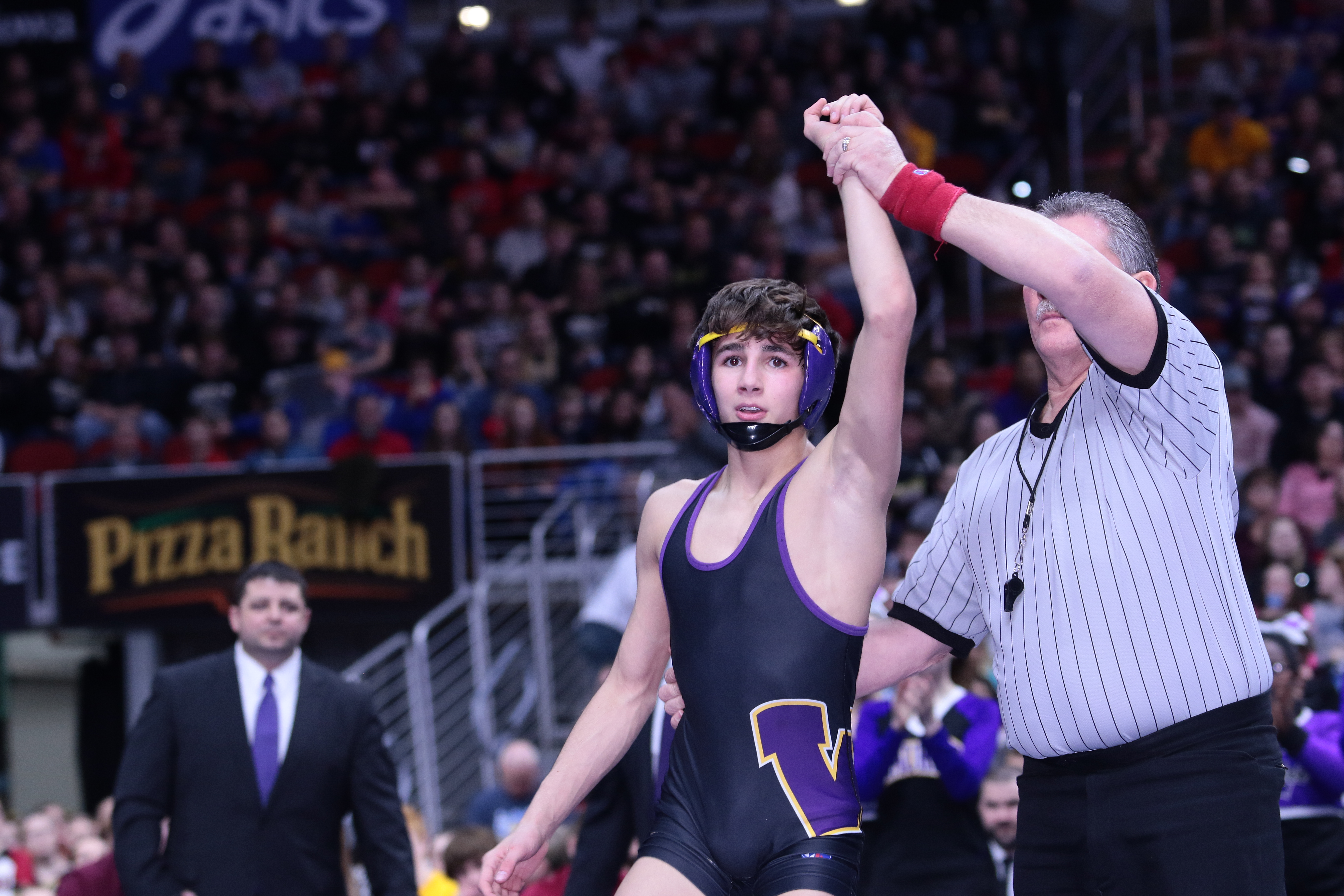 Half way through the season did you think you could be a state champ at 113lbs?

I never thought about wrestling at the state tournament at 113.  I always believed that if I kept working hard I would go to state at 106.  I had some great battles at 113, but I always felt small at that weight, especially once the growth allowance came into place.

After the final wrestle off to get your shot at 106lb title. Was it bitter sweet?

It was never sweet.  In fact, it was very hard to keep my focus after that wrestle-off because I felt terrible for Cade.  I feel like we both drove each other to get better the entire season.  Off the mat we were very relaxed around each other, just as we have always been.   On the mat we were competitors and we both wanted to win by being the better wrestler at the end of the season.  I didn’t want to win by an injury so I did not like that it ended that way.

When you found out you would be wrestling Drew Bennett in the second round what went through your mind knowing you had the #2 kid in the state as a quarterfinals opponent?

I knew I was probably going to have to beat Drew at some point during the tournament.  Drew and I have wrestled many times and the matches have always been close, so I knew I needed to be ready for a battle.  I had been preparing for that match all season so the fact that it was in the quarterfinals didn’t really change anything.

You won a state title in a bracket that featured several talented wrestlers, how does it feel to be a state champion?

Winning state this year was one of my goals and it always feels good when you reach a goal.  To win state I knew I had to keep improving, particularly in my set-ups and hand fighting.  I felt like I improved throughout the season.  I still have more goals to reach and I will need to continue to improve if I want to meet those goals.

Last season you did not get the opportunity to wrestle at the state tournament, did you use that experience as motivation for this season?

Obviously, last year was a disappointment in that I wanted to be a state champion so I didn’t reach my goal.  After last season my goal was to win in Fargo at 100 pounds and I fell short there too.  Then I set my sight on the Super 32.  I guess it is not so much the losing that motivates me because there is always another challenge in wrestling even after a big disappointment.  This year I won state and the next goal is still to win Fargo.   I think it is the next goal that motivates me more than the last disappointment.

Last fall you competed in the Night of Conflict, Conflict at Carver, and the Super 32. Do you like going out of state and seeking those challenging matches?

I have been travelling to wrestling tournaments for a long time.  My family usually goes together and we make the trips fun and not just about the wrestling.  My favorite trip was to Reno when I was in eighth grade.  We went to see Lake Tahoe and Virginia City.  But wrestling at those big tournaments is important too because you get to see where you are and what you need to improve to get better.

What are your summer wrestling plans, if any?

My focus right now is UWW Nationals in June and Fargo in July.  I am working hard to improve my freestyle finishing because I think that will help me in with my freestyle goals and will make me a better wrestler in high school next year.

What weight will we see you at this summer, and what weight do you think you will wrestle next season?

Right now I plan to wrestle 113 during the freestyle season.  I have no idea what I will weigh next year.  I have grown an inch since the season and I hope I keep growing.

A lot of us are going to club practices and wrestling in off season freestyle and folkstyle tournaments.  I think that will carry over into next year.  I am also looking forward to Cody Anderson being a freshman next year.

With this being your junior season coming up, you will be able to be contacted by college coaches for the first time in just a few months. Are there any colleges that currently standout at the moment?

My ultimate goal is to wrestle in college, but I have no idea which college.  Right now I feel like I need to focus on improving my wrestling and working hard at school so that I have more options when I do get ready to decide on a college.