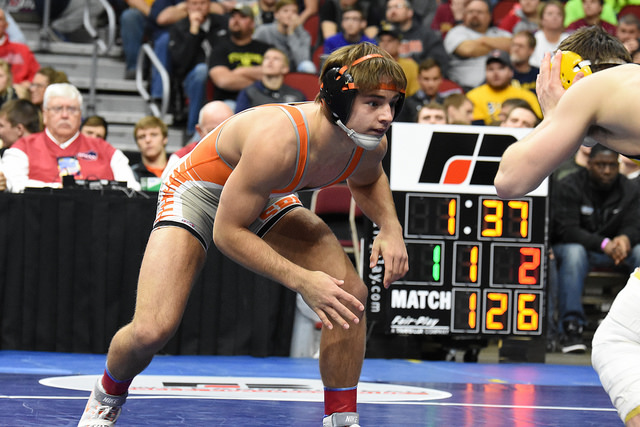 IA Wrestle: You had another great season and are now a three-time place winner and two-time state finalist. Did you expect to have this kind of success when you entered high school?

Brayden Curry: I had goals for myself when I entered high school that were put on hold due to a serious injury. With the help of caring, dedicated people, and of course the man above, I was able to finish my freshman year, and also my therapy. The success I’ve been blessed to experience in high school is greatly due to the people, coaches, and family that worked to get me back on the mat in that year. They’re all an amazing inspiration.

What would it mean to you to win that elusive state title next season after being so close three times?

Every wrestler in the state has at one time or another seen themselves at the top of the stand. Whether it be in a dream, or actually standing there at the end of the year. This is Iowa, one of the toughest wrestling states in the country. It’s an honor to win the title here, and it would mean the world to me.

Sergeant Bluff-Lutton should have a lot of fire power coming back next season led by you, Rhyker Sims, Preston Dunn, and Kyle Benson. What are your team goals for next season?

With an impressive freshman class coming up we have a lot of confidence coming into this next season. Hopefully the boys can buy in and trust in the program so we can achieve our goals.

How much wrestling do you plan on doing this summer? What tournaments?

Nothing has changed since the season. The schedule is still five days a week. I’ve been blessed to have the opportunity to wrestle with some college and even senior level wrestlers on a daily basis this off season. I’ll be wrestling with SBL at some team duals, and doing a lot of freestyle and Greco tournaments around the state.

Who is your favorite wrestler to watch?

Zain Retherford. He’s a very down to earth guy, and absolutely dominates on the mat.

Me, Rhyker, a couple other guys usually set up a tent down by the Missouri River and fish for the entire weekend. It’s a great way to blow off steam and talk about our plans in wrestling!

This is definitely an exciting time for any high school athlete looking to continue their athletic career in college. My dream has always been to be a Division I wrestler, and succeed at that level. In that division I am interested in The University of Nebraska-Lincoln, and Virginia Tech. Both programs have made great foundations and have excellent coaching staffs. In D2 I’ve been looking a lot at Augustana. They’re a great group of guys that are dedicated to helping their athletes reach their goals!