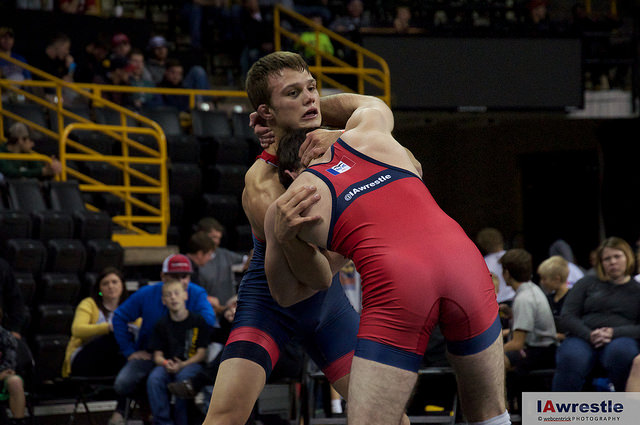 Add national champion to the ever growing list of accomplishments for future Iowa State Cyclone Kanen Storr, as he came out on top of a tough field of wrestlers to win the NHSCA Senior division. This tournament victory comes just one week after Storr was downed 4-3 in the FloNational finals.

Storr started his tournament off on a strong note taking out New York senior Dylan Wood 11-4 and following that with a 22-7 technical fall over North Carolina’s Tyler Moon. He then defeated Washington’s Riley Seward 10-7, before facing his first seeded wrestler, Alex Baker of California, in the quarterfinals. Storr downed Baker 13-5 and added a 8-3 win over Missouri’s Josh McClure to reach the finals.

The finals showdown pitted Storr against Montana standout and #14 ranked Jarrett Degen. IA Wrestle fans may be familiar with that name, as it was Degen that defeated Carter Happel in the first ever Night of Conflict match. In fact, Degen and Storr were both on Team Metcalf, which won the Night of Conflict dual last Fall.

Storr would come out on top in this meeting between the two nationally ranked foes winning a one point match, 4-3 to clinch his national title.

“It feels great,” Storr said on winning the national title, “After falling short last weekend it was good to get back on top of the podium and get a big win. It feels awesome.”

“I remembered Degen from the Night of Conflict,” Storr said, “We talked a little before the matchup and we’re really friendly. I knew his length was the biggest thing to worry about, so I tried to stay in positions to not give him his leverage.”

In addition to Storr, a pair of Iowans were also in the field with Fort Dodge state medalist Drew Bennett competing at 106 in the sophomore division and Iowa Valley’s Jacob Krakow wrestling at 145 in the junior division.

Bennett started off with a decision in the first round and then pinned No. 4 seed Drew Schafer of New York in the first period. Bennett picked up two more wins before being knocked to the backside by New Jersey No. 5 seed Dante Mininno, 6-5. After that Bennett needed three straight wins to reach the third place match where he lost to No. 3 seed Dalton Rohrbaugh 9-5 to finish fourth.

Krakow earned a fall in his very first match on the weekend, but was bumped in the second round, 7-6 to Pennsylvania’s Colton Weaver. Krakow won his next three matches but was then eliminated in the consolation round of 16.