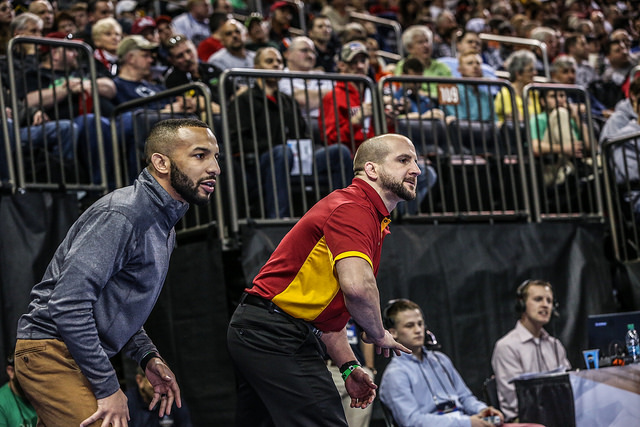 Heading into the final weekend the Iowa state Cyclone program wasn’t even ranked in the top 25 by InterMat, but that did little to phase head coach Kevin Jackson in getting his squad ready to compete in Madison Square Garden.

It was there that Iowa State put together their strong tournament of a top 12 finish, led by three All-Americans – two of those being unseeded wrestlers. Lelund Weatherspoon was the biggest surprise when he jumped to a 7-4 first round victory over No. 2 seed Brian Realbuto of Cornell on the way to his podium finish.

The biggest season highlight belongs to junior Lelund Weatherspoon, who put together a sixth place finish at 174 two weeks after he captured a Big 12 title in Kansas City.

After spending the last two seasons at 184 pounds Weatherspoon dropped to 174 as Tanner Weatherman dropped to 165 with the departure of Mike Moreno. Weatherspoon had an up and down season, but trusted his offense when it counted to reach the NCAA semifinals downing No. 2 seed Realbuto and No. 7 seed Cody Walters of Ohio on the way to his sixth place finish. With a solid 2016 under his belt, fans have a veteran presence to be really excited about.

Earl Hall also made it on the stand, improving to his best career finish by taking seventh at 133. Hall started the season looking like a top eight wrestler at this weight and his only low point on the season was his disappointing 4-2, seventh place finish at the Midlands. Hall ended the season on a high note, joining teammates Kyven Gadson and Mike Moreno as two-time All-Americans under Jackson.

And lets not forget Pat Downey coming through for Iowa State and taking fifth at 197-pounds. Like Weatherspoon, Downey was unseeded coming into Madison Square Garden. Downey came out and defeated No. 11 seed Phil Wellington of Ohio, and then pinned No. 6 seed Jared Haught (the first time, he would pin Haught again in the fifth place match) to reach the quarterfinals.

What this did for Iowa State was give them a much needed boost and it’s clear Downey brings a lot of energy and bonus potential to the lineup.

This team loses two starters to graduation, All-American Earl Hall and 165-pound starter Tanner Weatherman. Both wrestlers have been stalwarts in the Cyclone lineup for three and four seasons respectively, which means the lineup will be losing quite a bit of experience that is hard to replicate.

It will be up to Downey and Weatherspoon to provide that leadership and experience for this rather young looking squad. Downey is expected to go down to be the 184-pound starter, which means NCAA qualifier Dane Pestano may need to bulk up to 197 and challenge freshman Marcus Harrington, who was bumped by Downey late in the year.

NCAA qualifier Kyle Larson (above) should be back to man 125 for his senior season, but from 133 to 165 there are plenty of openings.

At 133 we could see a battle between current redshirt Markus Simmons and redshirt freshman Nathan Boston, whose days at 125-pounds appear to be over.

The 141-pound weight opened up this season when Dante Rodriguez made the move to 149 following a Gabe Moreno injury. It was Boston who filled in here down the stretch, which could mean we see him back here in the future.

At 149 Gabe Moreno has been a top 20 wrestler at this weight prior to his shoulder injury removing him from the lineup. If Moreno doesn’t bump to 157, we could see Moreno and Rodriguez battle for the spot or Jackson may opt to redshirt Rodriguez, who still has that option available.

A pair of freshmen, Logan Breitenbach and Renaldo Rodriguez-Spencer, traded starts all season for the 157 spot, but don’t be surprised if current redshirt Chase Straw makes a push here as well.

With Weatherman now gone, we could see another current redshirt, Colston DiBlasi emerge at 165-pounds, after his solid season.

Quean Smith will be back from injury, and should man the heavyweight spot.

Following the graduation of his big class that included Gadson and Moreno, Jackson made a big splash in his 2016 class grabbing several big names, including keeping one of the state’s top talents at home.

That homegrown product would be Dubuque Hempstead’s Gannon Gremmel, who comes in a Fargo Cadet national champion, and top 60 recruit. Jackson has been looking for a wrestler to step up and take the reins at heavyweight and while Smith has shown improvement, Gremmel comes in with a strong pedigree to potentially make him a great college heavyweight.

The bigger name nationally might be Oregon’s Sammy Colbray, who is ranked in the top 20 by InterMat. Colbray made the Fargo finals this past summer, and is projected to come in and push Marcus Harrington for the 197-pound spot in the lineup.

While many are high on the upper-weight grabs in this class, Jackson managed to grab two highly talented wrestlers from his home state of Michigan as well. Kanen Storr (above) comes in littered with top finishes at so many tournaments it’s almost obnoxious to list them all so we won’t. Suffice to say Storr has traveled all over the Midwest and East coast seeking challenges and never ducking the top competition. Storr is expected to compete at 141 or 149-pounds.

Also hailing from Michigan is St. John’s product Ian Parker, who recently made the move to the 135-pound weight-class (Michigan still uses the old weight class system), and is now viewed as a 141-pound prospect. Parker is highly accomplished as well, and should be a valuable asset in a Cyclone singlet.