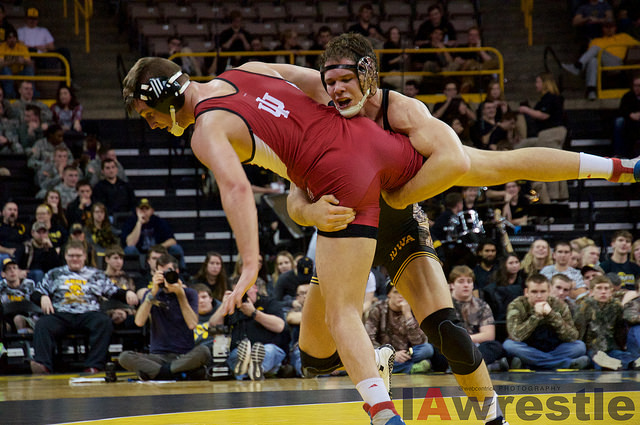 Aside from the conference title race, a key factor to watch is where wrestlers on the teams in the hunt for a national title finish (or perhaps don’t finish), in relation to the number of spots allocated as automatic bids to the NCAA tournament.
Iowa’s key weights to watch this weekend are 141, 157, and 165.

This weight is expected to be a battle and where fans will finally get to see if Gilman is ready to step up and answer the call for his team. Gilman’s highest ranked opponent he has faced all season is the #6 ranked Eddie Klimara back in November, thanks to the Big Ten schedule not having Iowa face either of Penn State or Ohio State.

Gilman will likely have to go through Megaludis and then Tomasello to finish on top of this bracket, and after listening to his interviews this season, he is ready for a Tomasello meeting. Last year it Tomasello got his first career win over Gilman in the finals, something the Hawkeye is hoping to rectify. The only certainty appears that whoever comes out on top of this bracket deserves the #1 seed in New York.

Another season, another year where the Big Ten is insanely stacked with talent at the 133 pound weight class. Clark went through the entire season only suffering one loss to Illinois undefeated wrestler Zane Richards. Aside from Conaway, most of these wrestlers have a back and forth history, though Clark and Richards have fared better than the others.

Richards and Clark will be viewed as the favorites and if either win they will most likely earn the #2 seed at NCAAs behind Cornell standout Nahshon Garrett. Since Gulibon moved back into the 133 weight he has shown tremendous improvement from where he was two/three years ago, and is the biggest threat to the Clark-Richards finals. DiJulius is dangerous, though has lacked the consistency to make him viewed as a title contender, and Taylor seems to have regressed from his 2015 conference runner-up season.

The Big Ten has been allocated nine spots for it’s 14 wrestlers, which is a testament to the depth of the weight. Depth can very well lead to upsets that can greatly affect the outcome of this bracket.

This weight is a bit wide open with the trio of Jordan, Ashnault, and Thorn all having a real shot to bring home the title, and the pre-tournament favorite being Jordan. The emergence of both Jordan and Ashnault as some of the top talent in the nation has been a welcome surprise as what was viewed as a down weight for the Big Ten in the preseason.

As you can see from the ranked wrestlers listed above, there are currently four top 20 wrestlers in the Big Ten, and seven spots have been allocated, meaning that Grothus should have a really good shot at punching his ticket to his second NCAA tournament. He has seen limited action on the year with a surgery delaying his start, but he has shown flashes of being a top seven wrestler in this conference. His showing against Thorn proved he is still a tough out for some of the nation’s best.

This will be an interesting weight in the seeding meeting alone. Entering the competition will be both undefeated Zain Retherford and Brandon Sorensen, both of which is not a bad pick for the top seed. Sorensen comes in the returning conference runner-up and fourth place All-American at the weight, while Retherford’s history at the Big Ten is at 141 two seasons ago. However, Retherford enters Big Ten’s as one of the nation’s most dominant wrestlers, including a major decision over the weight’s reigning champion.

If you are an Iowa fan, you might be okay with Sorensen getting the two seed this weekend as that would match him up with Sueflohn in his semifinal, and put Tsirtsis on Retherford’s side. Tsirtsis hasn’t looked like the wrestler that was able to win a NCAA title as a freshman, nor has he looked like the wrestler that took third a year ago. Still his defense seems to cause issues for Sorensen, something he has had less issue with when facing Sueflohn. Once again the winner of this weight most likely takes the top seed at nationals and there is even a chance that the runner-up still is able to get the #2 seed.

In reality this weight is chiefly viewed as Nolf and Martinez as the only two wrestlers that will be in contention for the title. Nolf is currently sporting an undefeated record on the year, and Martinez’s lone slip up was to Nolf during the dual meeting earlier this season.

While fans will be salivating at the potential Nolf-Martinez rematch, the real battle will be going on for third-sixth with Ryan, Lewis, Murphy, and Cooper all very much alive to win the consolation bracket. For Iowa fans it could be a big boost to see Cooper make a great run after seeing the senior come so close on several occasions to beating some of the top ten wrestlers at this weight.

Like 157, this weight is expected to be a two horse race between Jordan cousins Isaac and Bo – and ultimately that could mean a rematch of the Big Ten finals from 2015. That’s not to completely write off Rodrigues, who has made a tremendous transformation from middle of the pack 141 pounder as a junior, to top five 165 pounder a senior. Both Perrotti and Welch could prove to be interesting matchups for Isaac as four/five seeds.

The big question for Iowa will be can they push through Patrick Rhoads to the NCAA tournament as an automatic qualifier. As you can see in the ranked wrestlers, the Big Ten has seven top 20 ranked wrestlers, and six automatic spots. Logic follows that Rhoads is going to need at least one upset (if not two depending on how the bracket shakes out) to control his own destiny.

You want to talk about interesting? How about the fact that the weight’s third highest ranked wrestler is the only one of the group that comes into this weekend with an undefeated conference record.

Again, this isn’t because Meyer dodged the best competition in the Big Ten, in fact he was scheduled to face Brunson when the two teams dualed, but that was during the portion of the season that Brunson missed (not implying anything here, he missed more than just the Iowa-Illinois dual). Meyer has a legitimate claim to the weight’s top seed this weekend and given the fact that Nickal and Brunson have the best claim to second and third, that could be huge for Iowa.

Meyer needed a late comeback to best Indiana’s Nate Jackson, but most Hawkeye fans would rather see a Meyer-Jackson semifinal opposed to Meyer-Nickal or Meyer-Brunson. Meyer reaching the finals of the Big Ten could prove a huge boost for his NCAA seeding stock, and give his team a nice boost scoring-wise.

After earning the top seed in last year’s Big Ten tournament, many were expecting big things from Brooks in 2016 and with his start to the season, everything looked to be falling in place. Brooks got stuck by Dudley, and is coming off an ugly National Duals performance where he lost 7-3 to Pete Renda, so there will have to be some adjustments made.

Looking at the rest of the field returning champion Abounader appears to be in the driver’s seat to take his second straight title this weekend, with Brooks and Dudley as the two most likely to push the Michigan wrestler. Penn State’s McCutheon has seen his stock rise to a #7 ranking though multiple injury defaults have many wondering how effective he will be. McCutheon is a big question mark on how this bracket shakes out.

Allocations: 6
Top Seeds: #1 Morgan McIntosh (Penn State), #3 Brett Pfarr (Minnnesota), #4 NATHAN BURAK (IOWA), #11 Aaron Studebaker (Nebraska)
Two-time Big Ten finalist Morgan McIntosh will be back to defend his 197 pound crown this weekend, with the real race going to be whether it will be Pfarr or Burak as the one facing him in the finals. McIntosh has without a doubt asserted himself as both the top wrestler in the conference and in the nation, and barring a huge turn of events, he will be favored to leave with his second title.

The potential Pfarr-Burak semifinal will stir up some good conversations this weekend, with the Hawkeye faithful adamant that Burak had the takedown before time expired in their regular season meeting. In all likelihood if the two do meet it will be a tight contest and Burak will have the benefit of being on his home mat.

Lots of factors in play here that could drastically change the outcome and the factors range from the title contenders to the guys looking to make All-American runs in a couple weeks.

Starting with Kyle Snyder, who is only 3-0, is going to be stealing one of the Big Ten’s allocated spots. And truthfully I think a lot of fans want to see the 2015 World freestyle champion have his mettle tested with one of the best heavyweights in Adam Coon. Snyder is favored by every ranking service, but it should still be a phenomenal match.

On the outside Penn State is looking for Nick Nevills to get into the flow of the season coming in with a 5-1 record and only one real quality match (a loss to Max Wessell of Lehigh). If Nevills looks anywhere close to how he did in his redshirt season he will be a legitimate threat, though we are still waiting to see that wrestler.
Iowa’s Stoll suffered a leg injury (of some sort) during the National Duals meeting with NC State. Stoll was injured, tried to continue, then was injured again before Iowa called the match. A healthy Stoll could be a top three guy in the conference, but we will see if his injury is of the nagging variety.