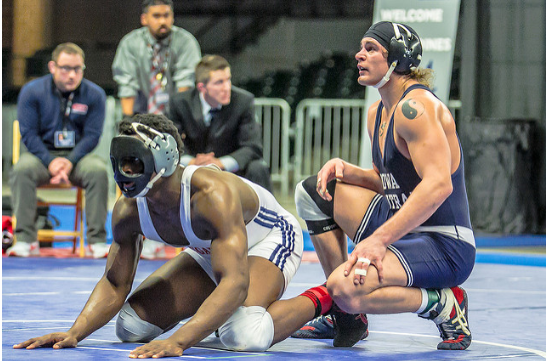 Confirmed from Ames that 2015 NJCAA champion Patrick Downey will in fact be wrestling at 197 pounds this post season, as opposed to the previously believed 184 pound weight class.

The move of Downey would cause a ripple effect, allowing Dane Pestano to remain the starter at 184 after being the guy most of the season and would cause freshman Marcus Harrington to either bump to heavyweight or move to the bench.

“I’m happy and excited with this decision,”Downey on why he had decided to move to 197 pounds. “There was not enough time for nutrition, and to make weight properly at 184lbs. I haven’t felt good in any of the three matches.”

This summer the Cyclones received the commitment of Downey shortly after he won his JUCO national title for Iowa Central. At the time Downey was considering using his Olympic redshirt to sit out the 2015-16 season in preparation for the Olympics in Brazil. Downey is a former Junior World runner-up back in 2012.

Downey’s start to the season was delayed for a semester as he finished up his associates degree before enrolling at Iowa State. Downey made his debut in a Cyclone singlet earlier this month against Northern Iowa where he took out Cody Krumwiede – the Northern Iowa 197 pounder – 5-2. He would also appear in the Minnesota dual and regular season finale at 197 pounds. Downey has won wrestle offs at both 184lbs and 197lbs.

This is certainly a positive move for what Iowa State head coach, Kevin Jackson sees in redshirt sophomore Dane Pestano, who is 22-11 on the season and all but four of those losses coming to top 20 wrestlers. With Pestano a top 30 wrestler in the coaches’ panel and RPI, he looks like a strong candidate to reach the post season.

The move would also cause freshman Marcus Harrington, who also had a delayed start to the season, to either move up to heavyweight or cost him his spot. Harrington is just 6-8 on the season, but has wrestled two of his last three duals up at heavyweight. Harrington may be able to shift along with Downey and steal an automatic qualifying spot from an opponent at the Big 12 conference tournament. Standing in Harrington’s way of starting at heavyweight is junior Quean Smith.

Stay tuned to IA Wrestle for additional coverage of the Cyclone post season.