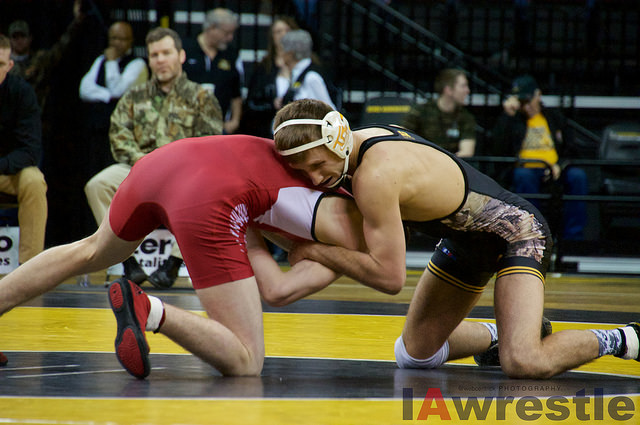 The Iowa Hawkeyes will wrap up their dual season at home with the #4 ranked North Carolina State Wolfpack heading to town for this year’s NWCA National Duals. Unlike previous years, the National Duals are held in a similar format to the old NCAA football BCS bowls. This year the top teams in the Big Ten host champions from other conferences – or as in Iowa’s case, they will be facing the at large selection.

After an undefeated season the Hawkeyes are setup to face NCAA’s season win leader, as NC State will be looking to claim their 23rd victory on the season over Iowa.

That will be an uphill battle for the Wolfpack, as Iowa enters the favorite in six of Monday’s 10 matches, including four Hawkeyes who will be facing an unranked opponent. Iowa will boast All-American Thomas Gilman at the dual’s lightest weight, and the junior is currently averaging a win by technical fall or better in duals for Iowa (5+ team points). Gilman will have Sean Fausz, who is 15-7 in his freshman season.

At 133 we will see the second Hawk to face an unranked wrestler with Cory Clark facing Jamal Morris. Clark comes in with an 18-1 record and his only loss to the #2 ranked Zane Richards on the year.

NC State will be favored in their first match at 141 pounds where sophomore Kevin Jack will face either Topher Carton, or more likely senior Brody Grothus. This will be a good measuring stick match for Grothus, who has only faced one other ranked opponent this season (Minnesota’s Tommy Thorn). Hawkeye fans have been looking for a way to gauge what kind of impact Brody can have on this year’s team race, and a win over Jack would certainly vault the senior’s stock.

Next, Brandon Sorensen will look for his team high 23rd win against Sam Melikian. Sorensen’s offense has been slow of late, with his last big win being an 8-2 decision over Alex Griffin of Purdue. With bonus points going to be a big factor in March, fans will want to key in on how Sorensen looks coming down the stretch.

At 157 we have a Midlands rematch (and the first ranked head-to-head) with Edwin Cooper Jr looking to close the gap on the undefeated Thomas Gantt. In the December meeting Gantt piled up a 17-6 win over Cooper.

Iowa will once again be the underdog at 165 where NC State’s rising star Max Rohskopf will face senior Patrick Rhoads. Rohskopf is coming off a big weekend where he defeated top 20 opponent David McFadden of Virginia Tech by technical fall, and top five ranked Daniel Lewis of Missouri 6-1.

Iowa will be favored in the next three consecutive matches with Alex Meyer facing unranked Nicky Hall, and Sammy Brooks and Nathan Burak currently ranked higher than both Pete Renda and Michael Boykin respectively. Both Brooks and Burak will be seeing their competition for the second time this season with Brooks winning 8-7 and Burak winning 8-2, both at the Midlands.

That will set up the most likely match of the night between #1 ranked Nick Gwiazdowski and freshman Sam Stoll. Gwiazdowski is looking to complete his second undefeated season and is favored to become a three-time NCAA champion. The last time these two met, Gwiazdowksi won 10-1 at the Midlands, but Iowa fans are curious to see how much Stoll has grown from that loss. Stoll has just two losses on the season, the first being his college debut, and his second (and therefore last) loss being to Gwiazdowski over a month and a half ago.

One thought on “Iowa hosts NC State for National Duals”