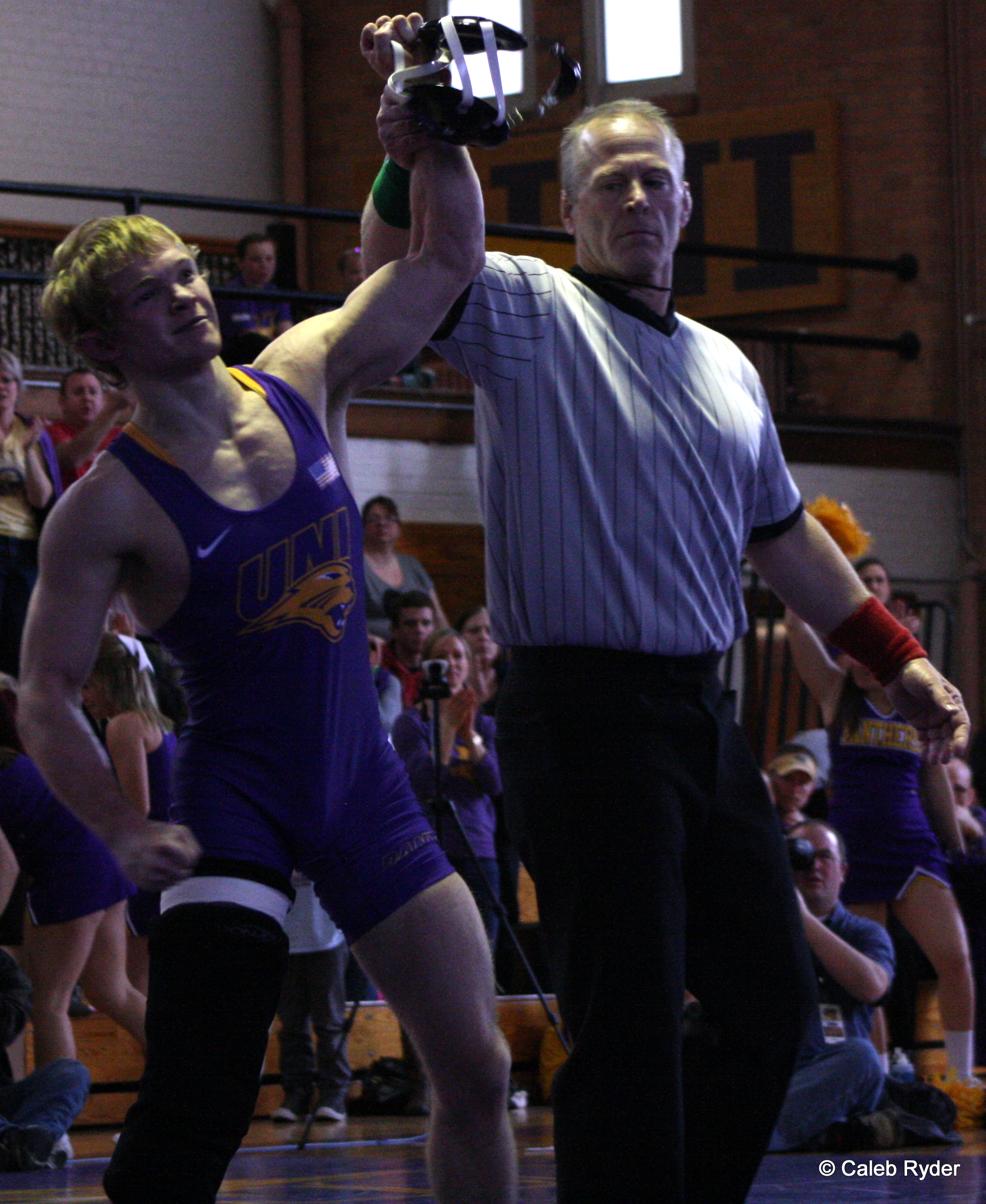 The Panthers dropped their second consecutive conference, and home dual, in the last three days to Ohio University on Sunday, 18-17. It was a back and forth dual, with the Panthers notched four wins, including a pinfall win from #7 Dylan Peters, and a tech fall win from #15 Blaize Cabell, but it wasn’t enough to overcome six decisions by Ohio.

Peters led UNI first in the match lineup, and then scoring big with the pin. He actually gave up the first two points of the match against Shakur Laney on a reshot by the Bobcat, and for the second match in a row Peters gave up the first takedown. He recovered nicely from this one though, escaping and then whipping Laney over in 1:55 to give his team a 6-0 lead.

#20 Bryce Steiert had a nice win over three-time NCAA qualifier Spartak Chino, 2-0. Steiert built riding time in the second period, riding Chino out, scored an escape point in the third period, and then worked hard to secure the win. Chino only took one shot the entire third period.

At 165 pounds #13 Cooper Moore won 6-2 over a solid wrestler in Austin Reese. Reese was able to keep Moore away for the majority of the match, but with a takedown in the first period, one in the third and escape point he pretty well cruised to the victory. Moore’s win put the Panthers up 12-9 with four matches left.

UNI would drop the next three matches though, all decisions, to Ohio. At 174 Kyle Lux lost to #11 Cody Walters 1-0, after a review in the first period took away a Walters takedown. Lux was right there with Walters, appearing to have scored an escape in the second period, but no call was made and he was ridden out. Lux decided to start the third neutral but couldn’t score a takedown and dropped the match, tying the team score at 12.

184 and 197 pounds were close matches too, with Drew Foster dropping a 3-2 decision to Andrew Romanchik, and Jared Bartel losing to Phil Wellington 6-4. Both Foster and Bartel fought through the third period, but neither man could score enough to get the victory. Those two wins put Ohio up 18-12, with only Cabell left for UNI.

And Cabell went out and did what he does best, takedown Ohio’s Jesse Webb. Cabell had 11 takedowns in the match on his way to racking up the 25-9 tech fall win, but he couldn’t get Webb over for the match-tying pinfall. Cabell looked as good as ever, scoring at will on the Bobcat.

The loss to Ohio puts UNI at 3-7 overall and 2-4 in MAC competition. They get a conference break for a dual, when they host #14 Iowa State on Friday at 7:00PM. Iowa State defeated #20 Central Michigan on Sunday 25-12, winning 7 of the ten matches. UNI is banged up, with at least 4 new faces in the lineup, but they’ll have little time to rest, because after Friday’s dual they’ll take on #22 Kent State on Sunday. We’ll have previews for both matches (promise, sorry I missed the Ohio dual preview), as well as play-by-play threads for both as well. You can check out all our photos from the dual Sunday here.

One thought on “UNI Drops Consecutive Conference Duals at Home”