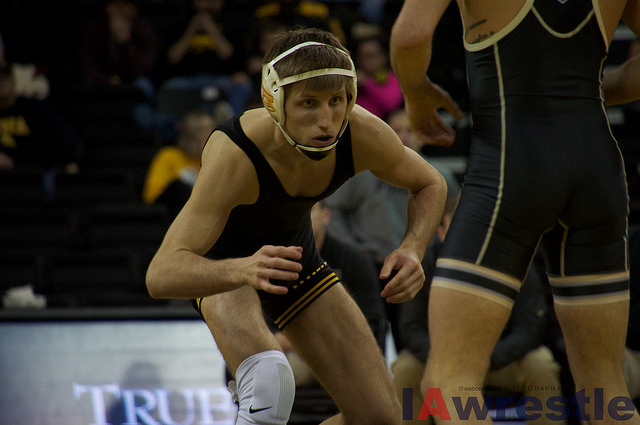 Dual scheduled to start at 8:00 PM, Refresh often for updates.

As always comment below article if you have any questions during the dual. Easiest way to get my attention will be to tweet to me @RossIAWrestle.

1st: Giilman was dang near in on a single in just four seconds but it looks like the head table wasn’t ready. Both guys will reset with a fresh clock. Gilman in on a single, took him :13 this time, picks the leg up and trips for two, cuts Petry and 2-1 Gilman. Gilman in on another single and another takedown, cuts Petry on the edge as they go out. Petry takes a shot off the whistle, Petry trying to pick the leg up, has it off the mat, Gilman with a good whizzer and whips Petry to his back for the fall.

1st: Both wrestlers working the head, now Clark on a real low single gets around Brancale for the takedown and lets him up. Another single for Cory this time head inside so he has got to come out the back, Brancale grabs Cory’s ankle looking to scramble, Clark finishes the takedown for two more. Brancale gets to his feet, Clark trying to return, but can’t and cuts Brancale loose. Clark now snaps to a front headlock and is trying to get the go behind. Gets it for two more, 6-2 Clark. Clark putting a tough ride on top. Brancale warned for stalling with :40 to go. Clark trying to pull the arm out, lots of forward pressure by Clark. Brancale trying to sitout, Clark follows and finishes the rideout.

2nd:Clark starts on bottom and is out in under 10. Brancale tries a shot, but Clark fights it off easy. Student section getting a chant going.7-2 Clark midway. FYI the knee pad is much smaller than that massive one he was wearing vs Nebby. Clark front headlock and go behind for the takedown with just over :30 left. Suck back for Clark, he has it locked tight and gets the fall. Short time

1st: Brody! Think this is a big match for Brody, lets hear it in the comments. Both guys come out working collar ties, nothing through the first minute.Grothus tries changing levels, tries a snap, now a shot by Thorn and Brody doing a good job digging underhooks to fight the attempt off. Stalemate.Now Brody in on a single, has his head inside, looked like maybe a neck wrench by Thorn, definitely very Dylan Ness like to score a takedown and put Brody in danger, Brody fights off his back and only trails 2-1 with an escape.

2nd Thorn starts down, Grothus starts with a spiral ride, Brody gets a little too high and Thorn gets the escape to go to their feet. 3-1 Thorn. Shot attempt by Thorn, Brody sprawls back and trying to block the knee. Stalemate. Shot by Thorn, Brody tries to grab an ankle to scramble, but Thorn finishes for 2. 5-1 Thorn.

3rd: Grothus starts down. Spiral ride by Thorn. Brody to his feet and is out after about :25. 5-2 Thorn. Grothus able to clear the arms and get in on a single, trying to lean back for a fall, now Thorn bellies out and Grothus is able to come around for 2 and cuts Thorn on the edge. 6-4 Thorn with :42. Shot by Thorn, sprawl by Brody. high crotch by Thorn and MN going to win here.

1st: Both guys not even really tying up. Now Sorensen in on a score and gives the escape in :13. 2-1 Sorensen. Under a minute Sorensen tries another shot, but doesn’t clear the arms so can’t penetrate. Period ends 2-1.

2nd: Short starts down. Sitout by Short, trying to work hand control, now he comes up his feet, but Sorensen sucking him back and now has him back in his base. Short to his feet, Sorensen cuts him, exactly 1:00 RT right now for Sorensen. Sorensen going underhook to jack Short up, Short tries to drop for a shot, but not there. Period ends 2-2.

3rd: Sorensen starts down, Works to his seat and is out in :08, 3-2 Sorensen lead, RT not a factor. One minute left, not very many attempts by either guy. Sorensen now in on a single, looking to bring the leg to his feet and gets the score on the edge of the mat.

1st: Kingsley in on an early shot, Cooper able to sprawl back and it is stalemated. Kingsley in on another single, Cooper Sprawls out and is now trying to come around. He has the ankle hooked, but Kingsley had the leg. Cooper finally awarded the takedown with :35 to go. Coop finishes the rideout.

2nd: They started neutral, Kingsley in on another single and it gets stalemated. Period ends, Coop still up 2-0.

3rd: Kingsley takes down. gets out to his feet, Cooper has :58 RT, just missed getting the point. Only leads 2-1 now. Shot by Kingsley, Cooper warned for stalling and able to get a whizzer in and fight out of it. Crowd really wants Cooper to just take a shot. :45 to go. Another Kingsley attempt fought back to their feet, Cooper hit for stalling again, now it’s tied.

SV: Half shot by Kingsley, another attempt by Kingsley, now Cooper goes for a double, switches off to a single and gets around for a takedown.

1st: Little late coming back from intermission interviews, but Rhoads with a takedown and cuts his guy. :40 left and Rhoads takes another shot and finishes quickly for 2, cuts him to lead 4-2, scratch that Rhoads gets another score with :04 left to go up 6-2.

3rd: Start on their feet, Rhoads able to get a score, cuts Urbach, takedown Rhoads, escape Urbach, Takedown Rhoads. 14-5 lead for the senior. Urbach now warned for stalling. Rhoads lets him up takesdown, lets him up takedown to his back, gets two near fall, 18-7 leada for Rhoads. Looked like he was going to cut him again then went for a cradle. There is the win.

1st: Alex working a two on one, but no attempts through the first 1:30. Meyer now in on a single with :32 to go and he finishes for the score, leads 2-0 after the first.

2nd: Meyer takes down. Meyer to his feet and is out in :20, in on a single right away for 2. 5-0 Meyer lead. Meyer just riding Wanzek tough right now, nearing one minute of RT. Wanzek tries to come to his feet, Meyer able to return him and belly him out. Finishes the rideout.

3rd: Starting on their feet here in the third. Meyer with 1:50 RT and a 5-0 lead. Wanzek shot, Meyer stuffs the head and reshot. Gets a single and finishes for a takedown. Meyer in Major decision territory. Meyer lets Wanzek to his feet and gives the escape, Meyer in on a shot and Wanzek warned for stalling. Meyer comes up with the leg and finishes for the takedown. 9-1 lead.

Pizza giveaway question, in the comments tell us your favorite Iowa wrestler vs Minnesota rivalry and why.

1st: Sammy works a snap right away, being really physical in the early going. Brooks gets bear hug and pancakes Pfarr for a takedown and two near fall. Escape Pfarr. Sammy in on a single and finishes for the score. Escape Pfarr. Pfarr tries a headlock, but Sammy able to bear hug again right to Pfarr’s back for takedown and two nearfall. Now Brooks puts Pfarr on his back again and gets a 4 point near fall. Pfarr got to his feet and Brooks returned him to his back. 16-2 lead.Cheap tilt with :03 to get the TF.

1st: Feeling each other out through the first minute.  There is a single attempt by Pfarr with 1:5 to go, brings Burak’s leg to his feet and finishes the takedown, 2-0 lead for Pfarr. Burak out in :06. High crotch attempt by Pfarr, not there. Period ends 2-1 Pfarr.

2nd: Pfarr starts down, Burak putting a lot of pressure on the shoulders, Pfarr backs to his feet and is out in :13. Attempt Pfarr, now Burak in on a single, brings it out, Pfarr trying to break the hold, Burak Trips on the edge for a takedown and were all knotted at 3. Burak lets him up, RT :18 in Burak’s favor. 4-3 Pfarr lead after the second.

3rd: Burak takes down, comes up to his feet, Pfarr gets a single and trips to return Burak fairly quickly. Restart, Burak to his feet and is out. RT is :00. 4-4 score. :45, high crotch Pfarr, Burak trying to sprawl out, now Pfarr gets the far ankle and finishes the takedown with :18 to go. Burak out high crotch right away trying to finish but can’t. Brands is going to want to challenge this. Burak looked pretty confused when he wasn’t awarded the two for what it’s worth. Mark Ironside is saying it’s two. No Takedown.

1st: Stoll able to push in and move Kroells around so far, both keeping action in the center of the mat however. 2:00 to go. Stoll trying to dig in some underhooks, Kroells getting pushed back, but still doing a good job circling in. Under 1:00. Stoll working a two on one tie. Shot by Kroells, Stoll gets around Kroells on their feet, but unable to score. Scoreless first.

2nd: Kroells starts down. Kroells up and out for the escape. Kroells takes a shot, gets too extended and Stoll able to come around for the takedown. Escape Kroells fairly quickly. 2-2 score. Period ends.

3rd: Stoll starts down. Comes up to his feet and is out. 3-2 Stoll lead, RT is :05 in Stoll’s favor. Another shot by Kroells, Stoll able to fight it off and get around for the score and now has Kroells bellied out. 5-2 Stoll lead. Escape Kroells. Stoll adds another takedown.