Hawkeyes-Gophers set to do battle on BTN 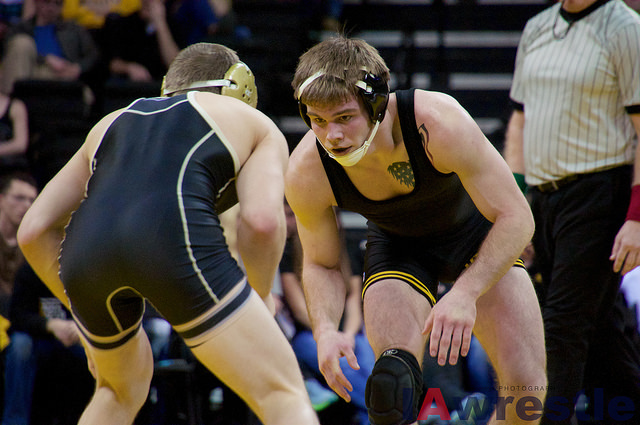 It’s time for the 101st edition of the Iowa-Minnesota rivalry, but for the first time in several years (at least since the beginning of the Tom Brands coaching tenure) the Hawkeyes will be facing a Gopher team that is out of the top 15 in dual rankings. The all-time series between these two teams is 71-28-1 in favor of Iowa, and Iowa is 9-4 since Brands took over the program back in 2006.

Despite Minnesota having a down year, they do bring two proven veterans into Friday night’s matchup, which will be featured on the Big Ten Network. The upper-weights have always been a source of strength for Gopher coach J Robinson, and this year is no different. #4 Brett Pfarr is set to take on #3 Nathan Burak at 197, and returning All-American Michael Kroells ready to face #7 Sam Stoll.

This will be the first meeting between Burak and Pfarr, as the Minnesota wrestler made the decision to bump from 184 to 197 for his junior season. The move has definitely been beneficial for Pfarr, as he has gone from a middle of the road 184 pounder to one of the elite of his new weight class. Last time on the mat Burak showed a chink in his armor against Aaron Studebaker, who held him to just four points. This should be a close match, and is the highlight bout of the dual.

The Kroells-Stoll match will most likely be a tightly contested matchup, with both wrestlers being unfamiliar with each other. Stoll has improved leaps and bounds in the hand fighting aspect of his wrestling this season, and his ability to put his opposition in uncomfortable tie ups has caused several of them to back out of bounds and surrender a stall call. With Stoll’s lengthy Greco background it’s clear why other heavyweights want to avoid positions that have already made Stoll a success on an international level.

Two other matches immediately catch one’s eye as highly interesting and they both come at 141 and 149 pounds.

With Brody Grothus officially back on the mat and taking starts for the Hawkeyes, it will be interesting to see if he once again gets the nod on the home mat and against the ranked Tommy Thorn. Grothus looked solid in his last outing, defeating NCAA qualifier Danny Sabatello of Purdue, and a win over Thorn would most likely cement himself as the starter on this team. In the meantime, teammate Topher Carton has looked okay in his starts, but is still lacking the win to put the lineup battle to bed.

The final top match to watch will be Brandon Sorensen taking on Jake Short at 149. These two have a history going back to high school, and they have met twice in college. Sorensen won the dual meeting in a tough 4-0 victory last January, and later would win by injury default at Big Tens. Short has been able to slow Sorensen’s offense down and has a rather deceiving ranking. Short has been in the top ten in this season’s rankings, but inconsistency has led to him slipping down a few rungs.

Many will expect Thomas Gilman and Cory Clark to roll at 125 and 133 in this dual over their opponents. Gilman won by major over Skyler Petry in the two’s only meeting in college. Clark has yet to face either Ben Morgan or Sam Brancale, but Clark’s doesn’t lost much at home – his lone loss Carver in his entire career was to Zane Richards.

Edwin Cooper Jr will look to fight off an upset from Brandon Kingsley, who is 16-9 on the year and has been able to wrestle the fringe top 20 wrestlers pretty close. Kingsley is also coming off a nice 5-4 win over Doug Welch of Purdue, who Cooper pinned last Friday.

The 165 weight class probably won’t be resolved this weekend either as Hawkeye combo Patrick Rhoads and Burke Paddock will face either Brad Dolezal or Brandon Krone. Neither wrestler have a resume that jumps off the paper, and Krone is probably better suited to 165. A win probaly won’t move the needle on securing the post season spot, but a loss might.

Finally, both Alex Meyer and Sammy Brooks should be the favorites to come out on top of their dual matchups. Brooks is coming getting pinned by TJ Dudley in the Nebraska dual, so we will see if the Hawkeye has extra motivation to get back in to his early season groove.

This is a pretty big weekend for the Hawkeyes if you are a fan of the National Duals. This year is a little different in how the NWCA has decided to setup the duals, but the important thing is that a win over Minnesota will have the Hawkeyes in good position to lock up and undefeated conference schedule. We will dive deeper into the National Duals format as it gets closer, but for now just know that the Minnesota dual is one of the last remaining obstacles for Iowa to hurdle.

One thought on “Hawkeyes-Gophers set to do battle on BTN”