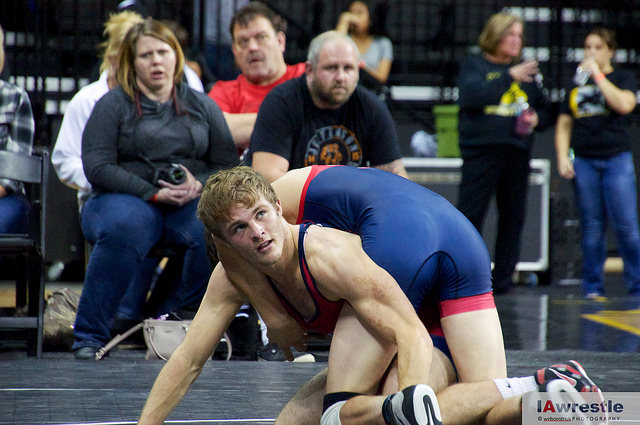 InterMat High school analyst Josh Lowe has updated his top 100 seniors* (class of 2016) and once again Lisbon three-time state champion Carter Happel leads his fellow statesmen as the top Iowan. This is an impressive senior class for the state of Iowa, with a total of seven wrestlers making the top 100.

*Note to view the top 100 list, you must be an InterMat Platinum subscriber

Happel is the lead Iowan, but is the third highest ranked University of Iowa commit, trailing #3 Alex Marinelli (St. Paris, OH) and #28 Kaleb Young (Punxsatawney, PA). Happel comes in at #38 on the list, and will be joined in the Hawkeye recruiting class by fellow Iowan Jack Wagner of Bettendorf, who is #84.

Gannon Gremmel of Dubuque Hempstead comes in at #57, that’s one spot in front of fellow Cyclone recruit Kanen Storr (Leslie, MI) who is #58. Joining the Iowa State’s recruiting class are #18 Sam Colbray (Hermiston, OR) and #72 Ian Parker (St. Johns, MI).

Southeast Polk two-time state champion Ethan Andersen is the second highest Iowan on the list coming in at #43. The former Cadet Greco national champion will be heading to Oklahoma State next season.

Another interesting note about the updated top 100 is that only five** wrestlers have yet to declare their college plans, and two of those wrestlers are from Iowa. The remaining Iowans are #74 Sam Cook of Fort Dodge and #99 Colton Clingenpeel of Council Bluffs – Thomas Jefferson. Cook has received offers from Oklahoma and visited Cal Poly, while Clingenpeel was known to be interested in Iowa and UNI.

**Though really #11 Kamal Bey is at the US Olympic Training Center, which may be where he spends this Olympic year. He is not expected to make his college decision anytime soon. What that boils down to is of the remaining uncommitted top 100 seniors, half of them are from Iowa.