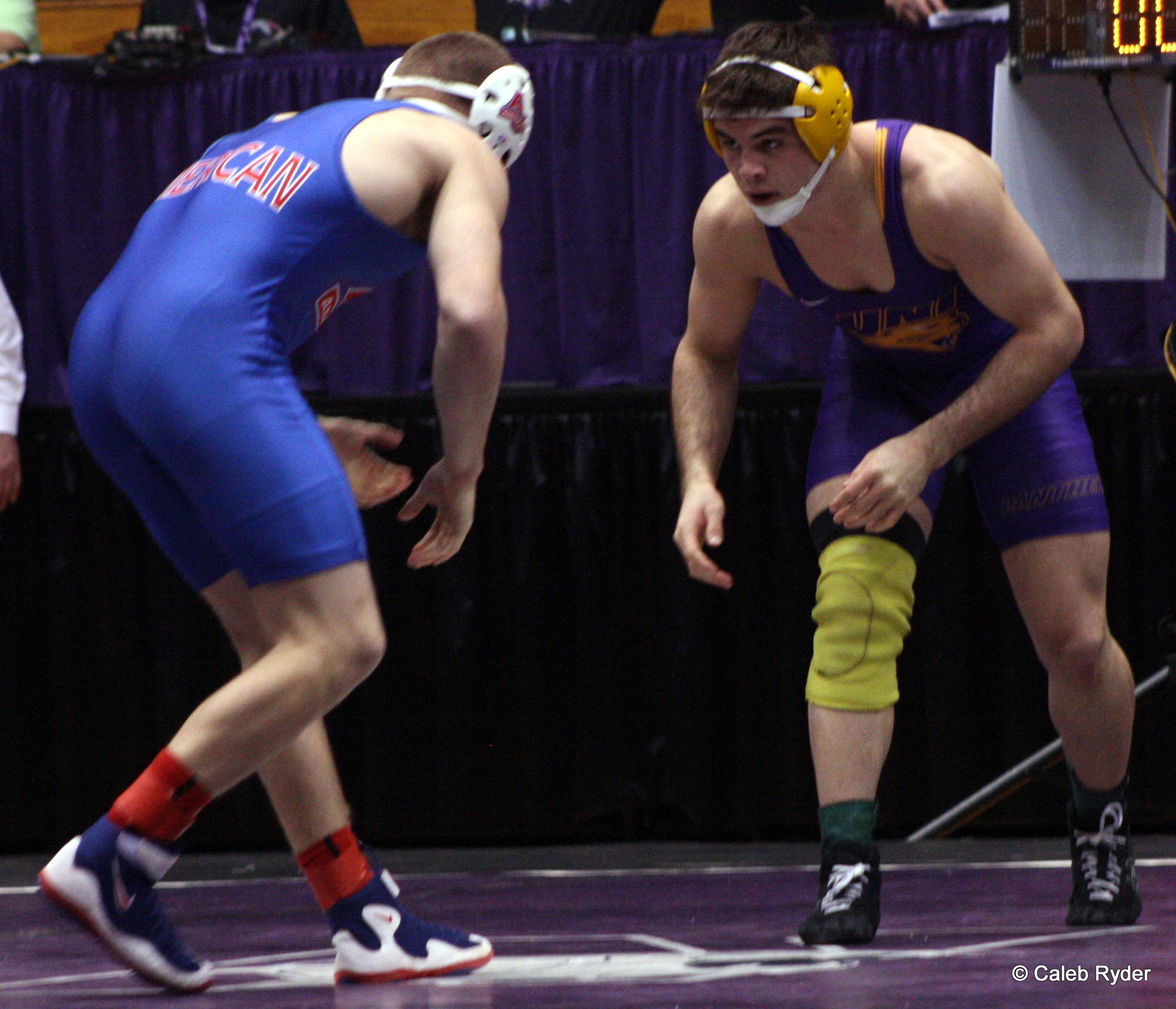 The UNI Panthers dropped a close dual with the Virginia Tech Hokies Friday night, in Blacksburg, Virginia. The dual was held at Virginia Tech’s Moss Arts Center, a theatre that usually hosts concerts, plays, and musicals. UNI couldn’t get it done in the unusual venue though, losing a close 19-15 dual.

The dual started off at 149 pounds with Trevor Jauch, making his debut at that weight, taking on Sal Mastriani for Virginia Tech. Jauch hit a go-by early in the first period for a takedown and put on a punishing ride for the majority of the period to take a 2-0 lead after the first period. He put on another great ride in the second period, scoring a two point nearfall and added a stalling point to take a 5-1 lead to the third, where he received another stall point, takedown and two point nearfall to win 10-3.

At 157 Bryce Steiert fought back from a 2-1 hole after the first period to score a reversal and a takedown in the second period. Steiert pretty much dominated Virginia Tech’s Jake Spengler from then on, scoring three more takedowns to move on to a 10-4 win. Steiert (and fans) were probably hoping to see #4 Nick Brascetta in at 157 for the Hokies, but he’s still out with an injury.

Cooper Moore made his return to the mat after being knocked out (literally) with a concussion at The Midlands, and it wasn’t the return performance that the Panther wanted. After a scramble situation in the first period (that was reviewed) David McFadden came away with a 5-2 lead, and Moore couldn’t get his offense going much after that. Moore couldn’t hit a shot and McFadden got a couple more takedowns to win the match 11-5.

At 174 pounds Kyle Lux took the mat and scored a big 7-2 decision win for UNI, keeping them in the lead 9-3. Lux lead 5-0 midway through the 3rd, when he cut Virginia Tech’s David Bergida before taking him down again. Lux looked really good and rode really well in the top position.

At 184 pounds we were expecting to see Cody Caldwell for UNI after a successful trip to Northern Illinois last week, but instead the Panthers wrestled Drew Foster for the first time at this weight, and he dropped a 13-2 major decision to Virginia Tech’s Zack Zavatsky, who is ranked 14th in the country.

Bouncing back and forth between wins saw UNI come out ahead at 197 pounds, where Jared Bartel won a close match with Austin Gabel, 3-2. Bartel hit a takedown in the second period and they each exchanged an escape point, and it was good enough for Bartel to get the victory.

The match of the night came at heavyweight, where #3 Ty Walz won a 5-2 decision over #15 Blaize Cabell. Cabell couldn’t move Walz like he had in their previous three meetings (all Cabell wins) and Walz was able to hit a takedown of his own to lock up the win. The match didn’t have fireworks, but both men wrestled smart, and Walz was able to come out on top.

Shifting back up to the lightweights, #3 Joey Dance had an easy time with UNI’s 125 pound backup, Leighton Gaul. Dance was on his way to at least a major decision when he caught Gaul with a half nelson in the third period for the win by pinfall. That put the Hokies up for good with a 12-10 lead.

Josh Alber would bounce the Panthers back with a come from behind win at 133 pounds. Alber trailed Dennis Gustafson 3-0 before coming back with an escape and a seven point move to put Gustafson away in the third period. Alber rode well in the second half, but until he his tilt in the third hadn’t really shown much offense. It was an important win for UNI at the time because it closed the team score to 16-15.

Jake Koethe looked to continue to beat top 20 talent, as he already has two wins over those opponents on the year, against #11 Solomon Chishko for Virginia Tech. Chishko was able to keep Koethe on his heels though, never letting Koethe in to get to any offense, and Chishko won the match 8-2. The win gave Virginia Tech the dual win 19-15.

It was a close dual for both squads, as they split the matches five to five, but both schools had All-American’s out of their lineups tonight. Moore’s match probably hit the Panthers the hardest, as he was favored to win, but coming back from injury without another match under his belt (and an unfavorable call against him early ) was too much for him to overcome.

UNI will be in action Sunday as they take on Old Dominion in Norfolk, Virginia, to round out their road trip. The dual will start at noon central time.