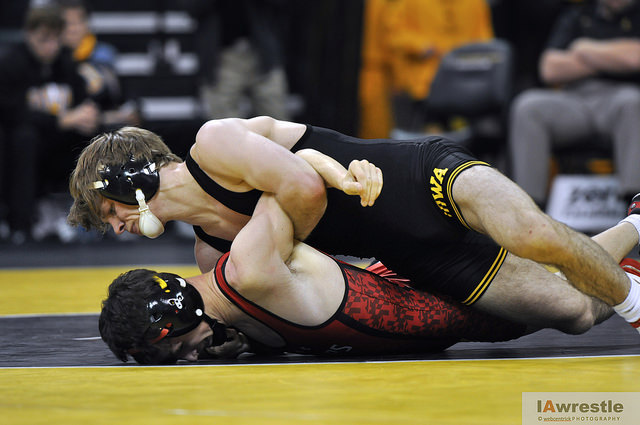 “A near perfect dual.”

Those are the words that KXIC’s Steven Grace said after the Hawkeyes blew out the Northwestern Wildcats in enemy territory by a final score of 54-0. The Hawkeyes finished the afternoon with a total of five falls and picked up an additional four bonus victories. This is Iowa’s first Big Ten dual shutout since December 6, 2014 when they blanked Michigan State 37-0. Per the University of Iowa’s Sports Information department, it is the largest margin of victory over a Big Ten opponent in school history.

Once again Thomas Gilman was a spark plug for Iowa, throwing a left handed headlock for a six point throw before locking up a cradle and putting Garrison White away in the dual’s first minute. Cory Clark was able to follow with a fall of his own at 133 pounds, after he got off to a slow start. Dominick Malone got a surprise early takedown, which provided Clark an early hole to dig himself out of. Clark ended the first up 3-2, but would score 13 more points over the next period and a half before locking up his fall.

Topher Carton got the easiest six points in wrestling when he received a forfeit at 141 pounds, which put the Hawkeyes up 18-0 heading into the dual’s feature bout at 149.

Brandon Sorensen and Jason Tsirtsis had a fairly typical first period which ended scoreless. In the second period Tsirtsis earned an escape to put the pair on their feet, which is when Sorensen used an inside single leg attempt to go for a takedown. Tsirtsis would injure his elbow during the sequence and the Northwestern staff decided to pull their star wrestler from the match giving Sorensen the win on injury default.

Closing out the first half of the dual was Edwin Cooper Jr. at 157, who scored a quick first period takedown and used a cow catcher to secure a fall and put Iowa up 30-0 at intermission.

Despite having a large margin of victory, the lone “blemish” for the Hawkeyes came at 165 pounds when Patrick Rhoads managed a 9-3 decision over Luke Norland in what was Iowa’s only non-bonus point victory on the afternoon. Rhoads was able to get a pair of takedowns in each of the first and second period, but was unable to add one more, which would have given the Hawkeye the major decision.

From there the Hawkeyes would finish the rest of the dual strong, starting at 174 where Alex Meyer picked up his second technical fall on the weekend this time against Mitch Sliga. Sammy Brooks looked to be on his way to a technical fall at 184, before he secured a second period fall against Regis Durbin. Nathan Burak won by major at 197, and Sam Stoll finished things out with a second period fall at heavyweight.

Up next the Hawkeyes will head to Madison, Wisconsin where they will face the Badgers in a dual that will be featured on the Big Ten Network. The last time the Hawkeyes faced Wisconsin was a 28-10 victory for the Hawkeyes back in 2014.