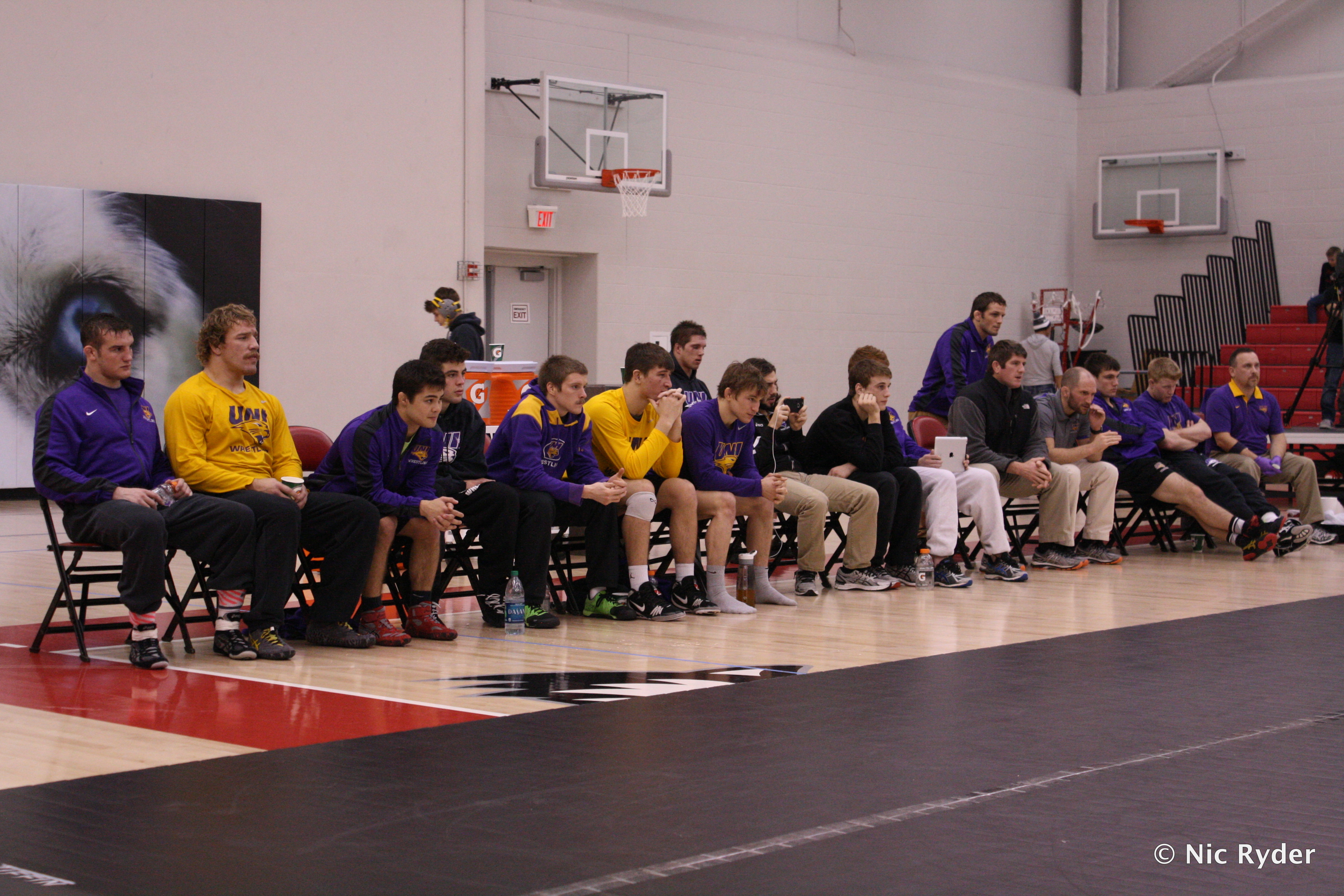 The UNI Panthers got their second dual victory of the year, and their first conference dual victory, tonight in Dekalb, Illinois against the Northern Illinois Huskies. The Panthers won 24-12 behind two pinfall victories by Bryce Steiert and Blaize Cabell.

“Coming into the match, hustle and fight were what we were going to key on,” UNI Head Coach Doug Schwab said after the match. “On a road trip and the first meet out (at Eastern Michigan last Wednesday), I don’t feel like we did that. Tonight I feel like the guys responded, we won some tight matches, we lost some tight matches.”

The close matches that Schwab talked about were right out of the gate. The final score of Jake Koethe’s upset bid over #15 Steve Bleise was 8-4, but it was 4-3 Koethe going into the final period. He was hitting ankle picks whenever he wanted against the Midlands finalist, and right out of the gate Koethe took the Huskie down.

Bleise hit a reverse and with the escape Koethe went to the second period leading 3-2. He started down and escaped again, increasing his lead 4-2. Bleise went down to start and scored his own escape point before Koethe hit two more takedowns to finish him off. It was Koethe’s second win over a top 20 wrestler in just over a week; he beat Nebraska’s Anthony Abidin at The Midlands.

“Of course (it builds my confidence), I’m right there with the best guys,” Koethe said after the dual. “Just keep grinding.”

#20 Bryce Steiert was the next win for the Panthers, he won by pinfall early against Austin Culton, with a single leg takedown and then a crossface to turn Culton for the win. Heavyweight Blaize Cabell would follow in his younger teammates footsteps by locking up a pinfall 2:27. Cabell even took opponent Arthur Bunce down twice before getting the win.

Taylor Berger picked up a solid win over Shaun’Qae McMurtry in Berger’s role as backup for Cooper Moore. They took a 3-3 tie into the second period, and Berger had a nice takedown in the third period to secure the win 6-5. Cody Caldwell followed that win up with a solid 9-5 win over Quinton Rosser. He nearly scored the pinfall win in the first period, but he racked up 6 points and then added another takedown in the third to get the win.

Josh Alber was the last Panther to take the mat, and the last to secure his win. He used a punishing ride to rack up riding time and tilted Austin Eicher early in the first period to build a lead. He would win 9-3, after a reverse and another takedown in the third period.

Northern Illinois won one match they were favored in, when Shawn Scott won close battle in sudden victory with UNI’s Jared Bartel. This was the second match in a row that Bartel went up against a higher ranked foe and didn’t back down; he led Anthony Abro of Eastern Michigan before losing by pinfall. NIU also won a close match at 174, when Trace Engelkes came all the way back from a 6-3 deficit to win 10-4 over Kyle Lux.

The Panthers will next be in action next Friday when they travel to Blacksburg, Virginia, for a dual with Virginia Tech.