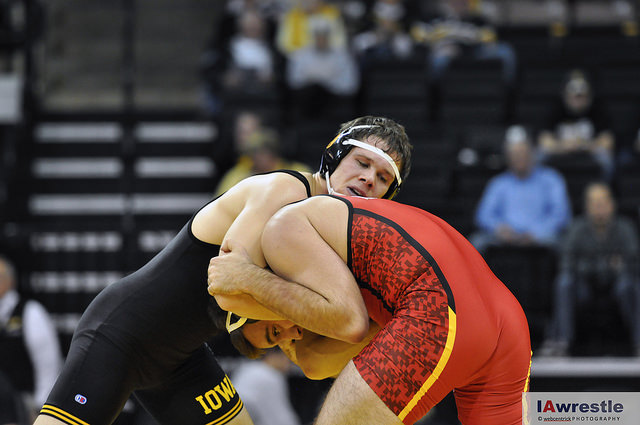 The Iowa Hawkeyes may not have set a scoring record this week, but they still made history as they won their tournament record 25th team title at the 53rd annual Midlands championship. The Hawkeyes left the tournament going three for three in the finals, racking up 152 team points over second place Nebraska

The Hawkeyes led the finals off with number one seed Thomas Gilman defeating Oregon State’s Ronnie Rios 5-1 at 125 pounds to earn his second Midlands title, his first since his freshman year. In 2013 Gilman defeated post graduate Jarrod Garnett to win his first title, but was thwarted on his second attempt in last season’s finals by Virginia Tech’s Joey Dance. Gilman finished the weekend outscoring his competition 28-8 and picked up a fall.

Brandon Sorensen made it two for two at 149 pounds when the sophomore had to go to sudden victory to beat the #4 ranked Jason Tsirtsis of Northerwestern 3-1.This was the fourth career meeting between the pair, and Tsirtsis had taken the last two. The two were even through regulation down to the amount of riding time (it was even), but Sorensen continued to attack and in sudden victory where first score wins, the Hawkeye was rewarded.

The Hawkeyes capped the finals off with senior Nathan Burak repeating at 197 pounds with a 6-1 win over Nebraska’s Derek White. Burak used a pair of third period takedowns on the way to the title. The Hawkeye also finished the weekend outscoring his competition 53-11.

Northern Iowa, Grand View, and Iowa State also placed a wrestler in tonight’s finals and the most dominant finals performance belonged to Andrew Long of Grand View, who won by technical fall. It’s been a long road back to the mat for the former Iowa prep standout, but he finished the weekend with two falls, a major decision, and a 23-6 technical fall in the finals.

Despite being on the attack for most of his match, it was Josh Alber’s aggression that got him in trouble in the 133 pound finals for UNI. Alber and Old Dominion’s Emilio Saavedra were all knotted at two points apiece in the second sudden victory period when Alber attempted a throw that Saavedra was able to slip out of and jump on top of Alber for the win. The Panther still had fantastic tournament, going from winning just one match at the tournament a year ago, to runner-up. Alber was the only Panther medalist.

The Hawkeyes finished the tournament with nine of their wrestlers finishing on the podium – eight of those their point scorers. Taking home third for the second year in a row was Alex Meyer at 174 pounds, who got a medical forfeit in the third place match over Nebraska’s Micah Barnes. Freshman Sam Stoll took out former Ankeny prep Ross Larson of Oklahoma 11-1 to take third at heavyweight, Sammy Brooks finished fourth at 184, true freshman Michael Kemerer took home fifth at 149, and Patrick Rhoads finished seventh at 165.

Hawkeye junior Cory Clark took home sixth at 133 after pulling out of the tournament’s semifinals with an injury.

The Cyclones finished the tournament in sixth place, with Earl Hall and Lelund Weatherspoon taking seventh at 133 and 174 respectively, and Gabe Moreno taking eighth at 149; in addition to Weatherman’s second place finish.