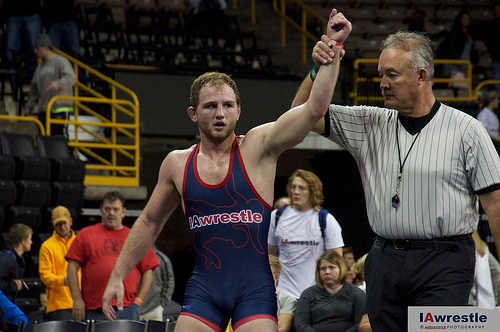 Future Hawkeye and current St. Paris Graham standout Alex Marinelli continued his winning ways yesterday with his second Walsh Ironman title. In addition to winning his bracket, the 160 pound wrestler was also named the tournament’s Outstanding Wrestler for his performance over the two day tournament.

Marinelli started off the first two round of his tournament with falls, both of which came in the first period. In the quarterfinals he matched up with the #19 ranked Ryan Karoly of Blair Academy (New Jersey), winning the match 18-8. Jesse Beverly of Delta (Ohio) was the only wrestler to prevent Marinelli from getting bonus, losing 8-4 in the semifinals. Marinelli put the screws to his finals opponent by earned a third period fall over Thomas Justin of Calvary Chapel (California).

It was also a weekend for the history books with Marinelli becoming the ninth wrestler in tournament history to become a four-time finalist. Prior to 2015 the last one to do so was Zahid Valencia, who was the tournament’s second four-time champion. This year both Wyoming Seminary’s (Pennsylvania) Mason Manville and Marinelli each made their fourth finals appearance. It’s not the first time the same two wrestlers have shared history, with both meeting in the 2014 finals where Marinelli claimed his first title in a tight 3-1 sudden victory match.

There was another Hawkeye commit competing at the Ironman tournament at 152, Luke Troy of Martin Luther King (California). Troy started the tournament with a technical fall, but a scramble in the second round might have been the cause of an injury that forced troy to injury default the match before the first period ended. Troy was unable to resume competition and we wish him a speedy recovery.