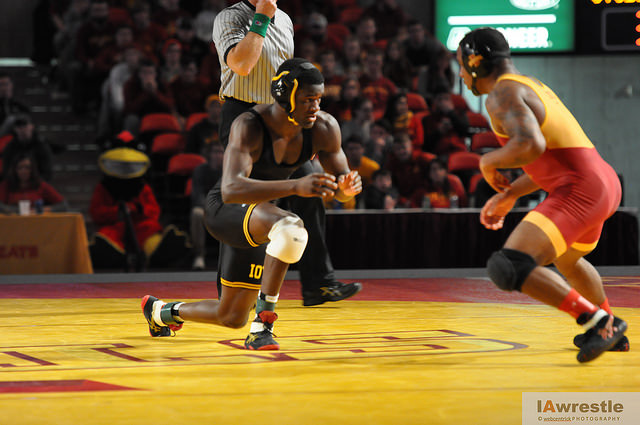 The Iowa Hawkeyes will return to their home mat this Thursday (note the time change from 5:00 to 7:00 PM) when they welcome in the Scarlet Knights of Rutgers and in this match Iowa will be facing perhaps it’s toughest test to date in their second conference matchup. Rutgers comes into this dual with a lot of momentum after defeating Cornell 21-13 in New York to boost them to #11 in the rankings. Iowa is undefeated thus far, and recently defeated South Dakota State 28-15 last Friday.

This dual will feature a ton of good matchups on paper, and while Rutgers will only be favored in four individual matches, they have plenty of talent that the Hawkeyes will need to be leery of to come out with a good performance to close out the 2015 dual season.

Perhaps Iowa’s biggest strength in this dual will be the bonus potential several wrestlers will bring to the table, and no one (okay maybe one other person) has been producing like Thomas Gilman has for Iowa at 125 who enters this dual a perfect 7-0 and all wins being by bonus. Combining Gilman’s torrid start with his 25-10 victory over Rutgers’s starter Sean McCabe last year and this could be an opportunity for a fast start for the Hawks.

At 133 we will see one of the nation’s top wrestlers in Cory Clark face one of the weight’s up-and-coming talents in the #17 ranked Anthony Giraldo. Clark is off to a fairly decent start to the season, but his 4-1 decision over Brance Simms last weekend shows that he needs some work to get back into the Clark we are used to seeing. Clark was frustrated against Simms where he appeared to be forcing shots to create offense instead of letting his setups do the work for him. This might be the dual’s best matchup if not on paper than by the eye test.

One of the things Tom Brands said in last week’s press conference was that 141 starter Logan Ryan needs to work on not letting his wrist get ridden, which is what cost him the match against South Dakota State’s Seth Gross last Friday. This weight has had a bumpy start to say the least, but Ryan faces a highly ranked Anthony Ashnault and a win this week could go a long way in restoring confidence in the young freshman.

Iowa will be in a position to bonus at 149 with Brandon Sorensen entering this week’s matchup riding a six match bonus streak. In his last two matches Sorensen has had to overcome slow first periods, but still posted back-to-back major decisions. An early match takedown could be just what Sorensen needs to truly open his offense up.

157 features another weight where Iowa is currently looking for the arrival of a starter and Edwin Cooper hasn’t necessarily looked bad thus far, he has just struggled with his mat wrestling and making mental mistakes in the top position that have cost him an opportunity to pick up a win over a ranked opponent twice. Both Rutgers starters John Van Brill and Richie Lewis are solid commodities and a win by Cooper would go a long ways getting an answer for this weight.

So far Iowa has faced two ranked 165 pound wrestlers this season (Dieringer and Weatherman), and Patrick Rhoads was the starter in both of those matches, so it will be curious to see if that’s who Brands goes with in the meeting with #12 ranked Anthony Perrotti. Freshman Burke Paddock has struggled in the early going this season, bringing in a 1-2 record at 165. Brands hasn’t given up on Paddock, which is telling, but we will see if he continues to give his veteran the big matchups.

Upon reflection, Alex Meyer is the same wrestler he was last year the only difference is that now he is the full time starter at 174 pounds, so we get more opportunities to watch him live. As cliché as it sounds to call Meyer a “gamer” or “grinder” I am beginning to believe that’s truly who he is. I am not saying Meyer can’t go out and blow an opponent out of the water; but if Meyer isn’t scoring in the first period, his matches always feel like a tight victory, but you never really doubted if he was in control.

The only other wrestler in the Iowa lineup putting up the kind of bonus numbers Gilman has so far is Sammy Brooks who has yet to wrestle in a match where he didn’t score at least five team points this season. Rutgers starter Nic Gravina is no slouch, but with as tough as Brooks has been wrestling this season I would be tempted to say he still wins with a major a possibility.

Nathan Burak is similar to his teammate Meyer where Hawkeye fans have seen how slick he can be on his feet, but for one reason or another, we never see Burak really pour it on. His opponent Hayden Hrymack will be someone that will be able to keep it close with Burak. Last season when these two met Burak won 9-5.

That leaves Hawkeye freshman Sam Stoll who will take on top ten ranked Billy Smith this week as the last remaining matchup to discuss. Since opening the season with a loss to #5 Austin Marsden, Stoll has looked great earning four falls and his high pace last Friday caused his opponent to be disqualified by receiving five stalling calls. This will be Stoll’s second big test of the season and now that he has a few matches under his belt he should be a legitimate threat to pick up his first signature win.

One thought on “Hawkeyes face Rutgers in Big Ten battle”