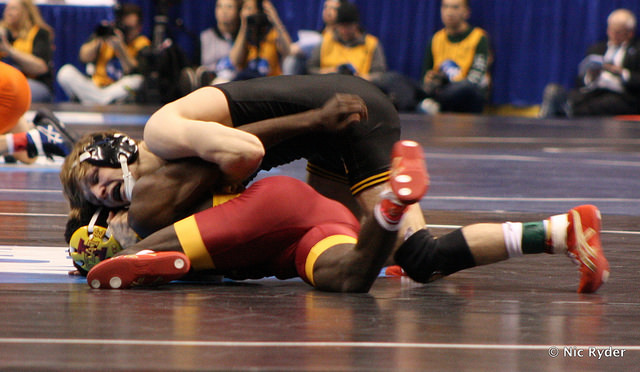 After a week off from competition, the Iowa State Cyclones will return to action this Sunday when they welcome in their in-state rival the Iowa Hawkeyes for the Iowa Corn Cy-Hawk Series. The Cyclones will be seeking their first win in the series since 2004 when they beat Iowa 19-16 in Carver-Hawkeye Arena which marked Iowa State’s first in the arena.. Since then Iowa has owned the last 11 meetings, including a 28-8 victory last November in Carver-Hawkeye Arena.

On the other side of the rivalry, the Hawkeyes will enter this weekend’s competition with a perfect 5-0 record after beating Oklahoma State in front of 42,000+ in Kinnick Stadium, and then pulling off the sweep at the Iowa City Duals.

Mirroring last season, Iowa State will enter the dual only favored in two of the projected matchups, but their lineup features plenty of promising wrestlers that will have the ability to pull upsets over their Hawkeye counterparts.

Last season Head Coach Kevin Jackson went with a surprising move when he decided to pull the redshirt on true freshman Dante Rodriguez to have him make his Cyclone debut against a top ten ranked wrestler. Rodriguez went on to have an impressive freshman campaign and has been ranked in the top 20 at various points in his career; he will be one of the two Cyclones favored Sunday night. His opponent will likely be Logan Ryan, who has received a bulk of the starts so far this season for the Hawkeyes, and it looks like Topher Carton may have suffered a setback, as he medically forfeited out of last weekend’s Joe Parisi tournament.

Rodriguez is known for being a highly competent pinning machine, which could give the Cyclones a big boost in the team race. Both Hawkeye wrestlers are regarded for their intensity and by trying to set a high pace which favors into their outstanding conditioning.

The 133 pound matchup us a familiar one for both teams with Earl Hall and Cory Clark squaring off for the fifth time in their college careers. Clark has won all four of the previous meetings, but it was a cement mixer back in 2013 that almost stole the match for Hall in their first meeting. Since the first match Clark is averaging over a five point margin of victory over Hall.

Brandon Sorensen and Gabe Moreno will be the second head-to-head meeting between two ranked wrestlers in the dual, with the pair only having met just once in their career. Last year Sorensen made his Carver debut with a 7-6 decision over Moreno. Since that match Sorensen has gone on to establish himself as one of the top wrestlers in the weight, but as with any rivalry match, expect Moreno to give Sorensen a tough battle on his feet. The biggest concern for Iowa State will be how Moreno handles going underneath Sorensen, who is particularly strong in the top position. If Sorensen is unable to get the rideout, he can still wear his opponents down from that position.

The 174 pound matchup is the last of the three ranked head-to-head matches, and both teams have new starters at the weight, though both have wrestlers have plenty of experience. After spending two seasons at 184 pounds, Lelund Weatherspoon has made the way down to 174, where he is off to an 8-1 start for the Cyclones. His opponent will be Alex Meyer, who is entering his first full season as a starter, but his resume as a backup to Mike Evans earned him a preseason top ten ranking. Weatherspoon and Meyer are both grinders and both wrestlers will want to try and build an early lead as both guys are known to be able to put together come from behind victories.

Returning All-American Thomas Gilman will be favored at 125 pounds, but he will still be up against a tough opponent with the Cyclones Nathan Boston. Boston had an injury plagued redshirt season, and so far we have only seen the freshman since the first dual of the Cyclone schedule. If Boston is dealing with an injury look for Kyle Larson to get the nod. Gilman defeated Larson 6-1 in last year’s dual.

Both teams are looking to find out what they have at 157 pounds with Iowa using Edwin Cooper against Oklahoma State and Maryland and Cooper responded with a 0-2 record. Cooper has shown flashes of being extremely talented on his feet, but Skyler St. John appears to be healthy again as he made his debut at the Iowa City Duals. The Cyclones are looking to see what they have in freshman Logan Breitenbach who is off to a 5-3 start to the season.

Junior Quean Smith comes into this weekend’s contest 9-1, with his lone blemish being to St. Cloud State’s Austin Goergen (ranked #1 in Division II) at last weekend’s Harold Nichols. The Hawkeyes feature a former top high school heavyweight Sam Stoll, who registered three falls at this year’s Iowa City Duals. Stoll probably enters the dual the favorite, and with his ability to pin, he could be a handful for Smith.

When Tanner Weatherman announced he was dropping from 174 to 165, many pegged the former Ballard standout to be an All-American contender at the new weight. While AA status still remains a possibility, Weatherman has struggled in the early goings losing to Virginia Tech freshman David McFadden and then again to Clint Poster (St. Cloud State) in the Harold Nichols Open finals. Despite the struggles he will most likely be considered a big favorite as the Hawkeyes still don’t really know what they have in Burke Paddock or Patrick Rhoads, who are a combined 1-2 vs Division I competition this season.

The Hawkeyes figure to be heavy favorites in their matches at 184 and 197 against the Cyclones, who may still be without two of their key pieces. At 184. Patrick Downey is expected to join the team in time for the Midlands, but until that time Dane Pestano will have a tough task trying to upset Sammy Brooks. Brooks’s rankings may be deceiving considering he had three victories over eventual All-Americans last season. Similarly if ISU is without freshman Marcus Harrington, two-time All-American Nathan Burak will be the heavy favorite over Duke Egli at 197.