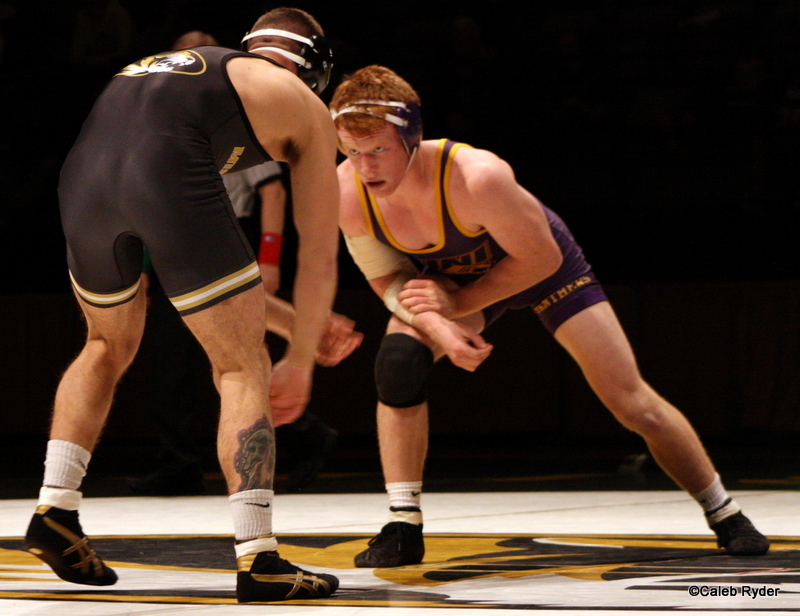 The Panthers start the season off in the West Gym when the Missouri Tigers come to town. The defending MAC champions boast six ranked wrestlers while the Panthers have four, and although there are arguments to be made for one or two more on each team, one or two might not wrestle in the dual either. The Panthers and the Tigers have the same goal: win the MAC and as many wrestlers back to the NCAA tournament. UNI won the dual championship in 2012-13, but Missouri has won the last two, and three straight MAC tournaments.

In order for the Panthers to get back on top, they’ll need to go through Missouri to do it. The Tigers bring in a tough lineup, and haven’t lost a conference dual in two years. The last opponent to do so? UNI in the West Gym, in 2014. Let’s break down the dual.

I’ll start where most duals start: the lightweights. The Panthers have the advantage at the lower weights, with Dylan Peters, Josh Alber, and Trevor Jauch going one-two-three. Peters is the class of the MAC now that Missouri’s former 125 pounder, Alan Waters, has graduated. Peters has moved up to a tie for sixth place with Levi Wolfensperger with 31 pinfalls in his career, and #32 would provide big bonus points for the upset-minded Panthers. His opponent in #13 Barlow McGhee won’t go down easy though, as he just defeated last years’ NCAA runner-up Zeke Moisey by major decision, 14-4. This match will be one of the best of the night, and could be a big swing match for both teams.

At 133 pounds Josh Alber looks to take down the defending MAC champion Zach Synon, something that Alber has already done in his career. Alber is 1-1 against Synon, losing a close 3-2 decision and then beating the Tiger in sudden victory in a rematch last year. Synon will look to remain on top in the MAC by defeating Alber again, but I like the Panther in this one, especially with the extra year of experience under his belt.

141 pounds also favors the Panthers, as ex-Missouri Tiger Trevor Jauch takes the mat for the first time against his former squad. Jauch transferred to UNI two years ago, and sat out last year due to transfer rules. The senior is looking to make the most of the year, dropping just one match so far this season, to #3 Anthony Ashnault of Rutgers a couple of weeks ago. The Tigers will bring in either Matt Manley or Le’Roy Barnes. Barnes beat Manley at the Joe Parisi Championship last week, so we’ll see who Coach Smith puts out there. These first three weights are critical to win for UNI if they want to score the upset.

At 149 pounds Missouri brings in All-American Lavion Mayes, who placed 7th at least year’s NCAA Tournament. Mayes is a little bit of an unknown; he can score at will on some guys, moving his feet to create angles for a double leg, and then look flat and uninterested in other matches. He’s bumping up from 141 pounds last year, so that might have something to do with his action as well, and we’ll see how he does with the extra weight. UNI brings in the familiar question of who will start this week, with Gunnar Wolfensperger and Jarrett Jensen continuing to compete for that spot. Jensen has yet to wrestle an official match at 149 pounds this year, while Wolfensperger has gone 4-2 on the year. Either way it would take a major effort from the Panthers to get the upset here.

Bryce Steiert will make his home debut for the Panthers at 157 pounds, as he takes on #10 Joey Lavallee. Steiert is 5-2 on the young season, dropping two of the three dual matches he wrestled while in New York, but claiming his first college tournament crown at the Finn Grinaker Cobber Open last weekend. Lavallee won a close match, a 3-2 decision, to UNI’s Jensen last year, before dropping his next two at the 2015 MAC Championship. Lavallee is working to get back to the NCAA’s where he was two rounds short of becoming an All-American last year. This would be a huge win Steiert, but Lavallee will be the heavy favorite.

The biggest question of the dual will come at 165 pounds: Is Cooper Moore healthy? And if I had to guess, I’d say no. His left elbow is the problem this year (which may sound familiar, as last year his right elbow was dinged up), and Coach Schwab and Co. want him at full strength before he hits the mat. That being said, I could see him wrestling this dual, then sitting out the Cliff Keen Invite and the UNI Open, and returning for The Midlands – that’s how important I think this dual is. If Moore can’t go, look for Taylor Berger to face Daniel Lewis for Missouri, and that will be a tough one for Berger.

174 is a bit up in the air for Missouri, as they have the sixth ranked wrestler, and Virginia transfer, Blaize Butler in the lineup here, but he has yet to see action this year. Instead the Tigers have been wrestling Timmy Miklus, who has gone 6-5 so far. Butler’s status is unknown, but obviously having him here would be a big boost for them. UNI brings in two men, Drew Foster and Kyle Lux, to try to fill in the 174 pound role after Curt Maas left the team. Foster has been the starter for two duals, against Hofstra and Rutgers, and dropped both matches. Lux is 4-0 on the year, including a win over Foster last weekend at the Finn Grinaker Open, so I would expect him to get the start.

184 features the older Miklus, Willie, the runner-up in the MAC to Old Dominion’s Jack Dechow. Miklus was the MAC Freshman of the Year last season. Miklus was undefeated in MAC duals last year as well. UNI’s Cody Caldwell is coming back from an injury-plagued season last year, and scoring a win over the ninth ranked wrestler would be a big announcement to the wrestling community that he’s back.

At 197 pounds UNI’s Jared Bartel has his hands full, with 2014 NCAA champion and 2015 fifth place finisher J’Den Cox. This will be an uphill battle for Bartel, who took sixth at the MAC Championships last season. It would also be the upset of the season (so far).

Heavyweight will also feature another lopsided battle, at least on paper. James Romero, a true freshman from New Mexico, is taking over for Devin Mellon. The former Tiger beat current #6 Blaize Cabell for the MAC tournament title last year, and I would expect Cabell to come out with a fire to get some revenge. Cabell is 4-1 on the year, and already has a win over number seven Billy Smith from Rutgers. If the dual comes down to Cabell getting bonus points, I’d expect him to get them for the Panthers.

And that’s my breakdown. I think the dual will hinge on two things: UNI’s lightweights getting bonus points, and the 164 pound match. I can’t see any way that UNI wins the dual without Cooper Moore, so lets hope he wrestles. This is one of only two duals in the country on Saturday, so be sure to check out the West Gym, or watch on our stream that we’ll have going live from Cedar Falls!