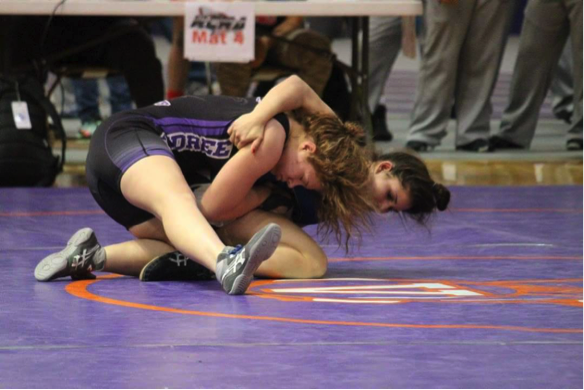 With the falling leaves and the crisp autumn air comes the excitement of another wrestling season in the great state of Iowa. We are well underway in the 2015-2016 collegiate wrestling schedule and there has been some activity at the senior level as we approach the 2016 Olympic Games in Rio. We are also anxiously awaiting the official start of the high-school season with competition beginning in most districts the first week of December.

Julie Johnsen of Underwood, wrestled for Waldorf College in Forest City, IA from 2010-2014 and is currently training out of the Cyclone Wrestling Club Regional Training Center (RTC). She will be competing December 17-19 in Las Vegas at the US Senior Nationals with the goal of qualifying for the Olympic Team Trials next April in Iowa City.

Jessica Fresh of Knoxville, also wrestled for Waldorf College from 2011-2014 and is a 3-time WCWA All-American. She is coming off of a 4-1 MMA run with her only loss being a highly-contested, controversial match against Linsey Williams of Minnesota. Jessica has decided to step away from the MMA scene to focus on an Olympic run and will be competing at the US Senior Nationals.

Lauren Louive of Massilon, Ohio, wrestled for University of the Cumberlands in Williamsburg, KY from 2008-2013. She is a 4-time WCWA All-American and current Assistant Wrestling Coach at Cornell College (Mount Vernon, IA). Lauren is ranked 4th at 60 kg in the USA Wrestling Senior rankings (April 21st) and 6th at 63 kg in the Takedown Wrestling Senior rankings (November 3rd). She is training out of the Hawkeye Wrestling Club in Iowa City. Lauren competed last weekend at the Bill Farrell tournament in New York City and went 1-2. Lauren will also be competing at the US Senior Nationals.

College Women: Listed below are the women currently representing Iowa at the collegiate level (alphabetical):

Waldorf College, Iowa’s first and only college with a women’s wrestling program, came into the weekend with a 3-5 dual meet record and a 2nd place finish in the Bronze division of the Cliff Keen/OCU Duals October 23-24 in Oklahoma City. They traveled with eight of their wrestlers Saturday to Marshall, Missouri to compete in the Missouri Valley Open. Head coach, Tyreece Gilder continues to build and improve the Waldorf program and finished 18th out of 35 teams represented. Iowans Illiana Bartsch and Justice Losee did not compete this weekend. Next weekend Waldorf will travel to Fremont, Nebraska to take on Midland University and the University of Jamestown.

Jasmine Bailey came into the weekend with a 5-2 record after going 3-0 at the Patriot Duals October 9th and 2-2 at the Cliff Keen/OCU Duals October 23rd-24th. Jasmine went 5-2 this weekend to improve her record to 10-4 and wrestled to a solid 5th place finish in the 136 pound weight class.

Cassy Herkelman came into the weekend with 9-3 record after going 4-1 at the Patriot Duals and 5-2 at the Cliff Keen/OCU Duals. Cassy went 4-2 this weekend to improve her record to 13-5 and took 7th in the tournament also in the 136 pound weight class.

Anna Poyner came into the weekend with a 5-4 record after going 4-4 at the Cliff Keen/OCU Duals and picking up a fall in the Missouri Valley vs. Lindenwood dual on November 6th. Anna went 0-2 this weekend in the 123 pound weight class.

Megan Black did not wrestle this weekend but currently holds an 8-1 college record after going 4-1 at the Patriot Duals and 4-0 at the Cliff Keen/OCU Duals. Megan also competed at the senior level in the Bill Farrell tournament last weekend and went 1-2 at 58 kg.

Justice Losee did not wrestle this weekend but currently holds a 3-5 record after competing in the Cliff Keen/OCU Duals.

Illiana Bartsch did not wrestle this weekend but currently holds a 2-1 record after competing in the Cliff Keen/OCU Duals.

The high school girls are just beginning practice for the 2015-2016 season. Our next update will include the young women wrestling on boy’s teams throughout the state of Iowa and the results from recent matches.

If you or someone you know is interested in the benefits of wrestling at any age level, please contact Charlotte Bailey of Female Elite Wrestling (FEW) at: coach@femaleelitewrestling.org to find out more.