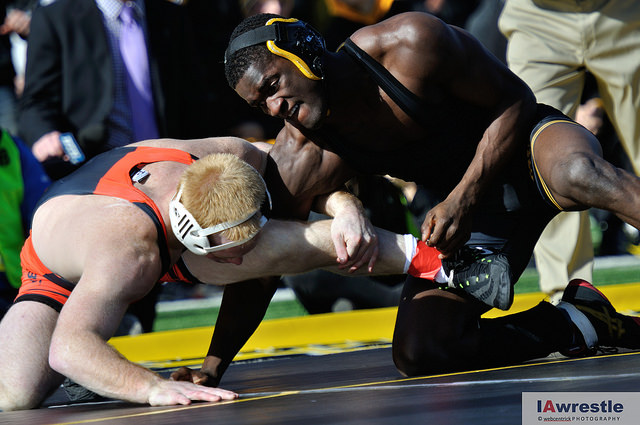 The Iowa Hawkeyes enter this weekend’s contest 1-0 at home; however this will be the first competition in Carver-Hawkeye Arena after 42,000 strong watched the Hawkeyes upset the then #2 Oklahoma State Cowboys in a landmark event.

You have to go all the way back to 2012 to find the last Division I opponent that Iowa brought in for the Iowa City Duals, but credit them for bringing in new Big Ten foe Maryland and Grand Canyon this year to step up the competition that the Hawkeyes will face. The squad has already been tested by wrestling one of the top teams in the nation, and this should be a great opportunity to have the Hawkeyes work on getting to where they need to be technically and physically early in the season.

Most years at the Iowa City Duals is where you see Brands give some starts to wrestlers who might not be the regular starters to get some match experience, develop depth, and in the case of a couple weights – still trying to figure out who the starter will be. Last year Brands bumped Topher Carton from 141 to 149 for the duals, so you never truly know who is going to step out on the mat.

With that said it’s pretty much a guarantee that both Thomas Gilman (125) and Cory Clark (133) will start all four matches this Friday as the only other two wrestlers listed at that weight on the roster are currently redshirting. Look for both guys to push the pace on their feet and try and rack up as many bonus points as possible. Clark’s Maryland opponent Tyler Goodwin could be a good match for the All-American as he scored a 24-23 win over Dom Forys (Pitt) to open the season.

Freshman Logan Ryan made his Hawkeye debut last weekend taking a loss to #1 ranked Dean Heil, but hopefully Topher Carton will be available for starts as well this Friday. Iowa Central features JUCO AA Jason Alfau and Maryland’s Alfred Bannister are two tough wrestlers that should test both Hawkeyes. Don’t be surprised if Brands decides to use senior Jake Kadel on Friday and then sending Ryan and Carton to an open (maybe Joe Parisi) like he did a year ago when he was looking to solve the 149 pound situation.

Brandon Sorensen is coming off a strong top ten victory over Anthony Collica and he should be a bonus point favorite in all of his upcoming matches. Redshirt freshman Tagen Lambotte could pick up a start or two if necessary.

For the most part I think fans were pleased with the Edwin Cooper they saw in neutral this weekend it was his mat wrestling that frustrated them as he dropped an opportunity to pick up a win over a ranked opponent this weekend. Maryland wrestler Lou Mascola would be a quality win for any wrestler looking to emerge and take the starting spot for the Hawkeyes. Redshirt freshman Skyler St. John or sophomore Logan Thomsen may see a start here as well.

It doesn’t appear that anything was settled last weekend at 165 pounds with Patrick Rhoads asked to go up against #1 Alex Dieringer it’s still too early to tell. Burke Paddock was considered to be the preseason favorite for this weight, but he competed last weekend at 174 pounds at the Harold Nichols Open. No team has a 165 pounder that stands out, which means guessing what Tom Brands will do will be a mystery.

Alex Meyer is coming off a tough top ten loss to Kyle Crutchmer at 174 pounds and no team has a 174 that truly stands out to truly test Meyer. There is a chance that one of Jake Turk, Faraan Brantley, or Trevor Graves pick up a start at some point.

One of the heroes from last Saturday’s dual, Sammy Brooks is off to a strong 2015-16 start already and it may be only one dual’s worth of results, but he looks like the Brooks we saw that started off last season with dominant wins. Brooks is a huge benefactor of the new four point nearfall rule and we should see more of it this weekend. Freshman Mitch Bowman is off to a nice start this season and could be an option.

The Hawkeyes will most likely use Nathan Burak and Kris Klapprodt at 197 pounds this weekend, though not because of a lineup battle. Burak started his first season without redshirt controversy, but Klapprodt has been a quiet backup over the last three seasons and provides great depth for the program.

Freshman Sam Stoll is the only heavyweight listed on the roster (though we’ve seen Klapprodt bump to 285 in the past) and he should rightfully get some good matches in the weekend. Stoll took a loss to top five wrestler Austin Marsden last Saturday, but look for him to get into the win column Friday.

4 thoughts on “Hawkeyes Return to Carver for Iowa City Duals”