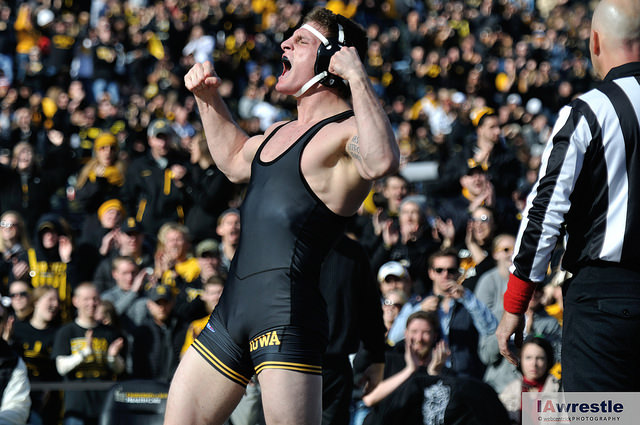 Hawkeye 184 pounder Sammy Brooks has been named the Big Ten Conference wrestler of the week after his 17-2 technical fall performance in the Grapple on the Gridiron.

The Hawkeyes opened their season at home, but for the first time they wrestled in Kinnick stadium to the tune of 42,000 strong against rival Oklahoma State which ended in an 18-16 victory for the Hawkeyes. Leading into the 184 pound match the Hawkeyes trailed 13-10 to the Cowboys until Brooks took the mat against Jordan Rogers. Brooks used four takedowns, two four point nearfall turns, and an escape to end the match in the second period, giving the Hawkeyes the lead.

Since this was the season opener, Brooks is the first Hawkeye to pick up the conference honor this season. Last year a Hawkeye won the award four times, with current 149 pound starter Brandon Sorensen winning it twice.

This week the Hawkeyes will move back into Carver, where they will host Maryland, Grand Canyon, Cornell College, and Iowa Central in the annual Iowa City Duals.