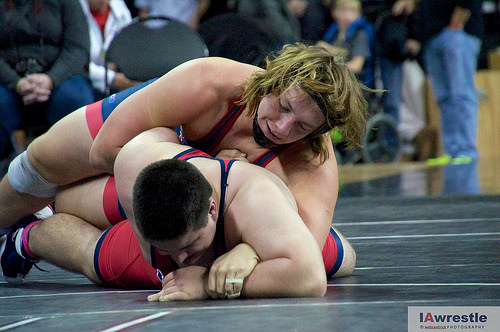 Gannon Gremmel from Dubuque Hempstead has committed to Iowa State University. The three-time state place winner is ranked No. 5 by Intermat and No. 9 by Flowrestling at 285lbs. Other seniors to commit to Iowa State include Michigan’s Kanen Storr and Ian Parker, Trey Meyer from Washington and Gavin DeWitt from Missouri.

Get to know Gannon Gremmel!

What other schools were you looking at?

I started out looking at a number of schools. I finally had the time to settle down and narrow my choices down to which school I liked the most and where im going to fit in the best at. My top schools were West Virginia,Wisconsin and Iowa State.

I loved meeting new coaches and shaking hands with the best wresters in the nation.

What did you hate about the process?

I actually started to get annoyed with getting calls every day about coming to a new campus and checking it out.

Why did you choose Iowa State?

Kevin Jackson is who really attracted me to Iowa State. He told me I have the ability to become a national champ and also become an Olympic champ. My dream is to wrestle in the Olympics and that sealed the deal. Coach Jackson is close to my grandparents whom are my biggest fans and he was the only coach to go out of his way and talk to them while he had his own athletes competing.

What do you plan on studying?

I plan on going in to business or hopefully having the credentials to become a Division I head wrestling coach.

Was it important to you to stay in state?

Staying in the state of Iowa was another big decision I had to make, I love it here and I already have a huge fan base going and can’t leave them.

What tournament are you looking forward to wrestling in this year?

I’m looking forward to the state wrestling tournament to get my first state title and also Fargo. I can’t wait to have another stop sign!

If you could take one match back from your career what would it be and why?

I would take back my state final bouts I didn’t think I wrestled well at all.

Who would you like to thank for getting you to this point?

I would like to give a big thanks to all my coaches and family for everything they did also my fans you guys are awesome!

One thought on “Overtime with Iowa State commit Gannon Gremmel”