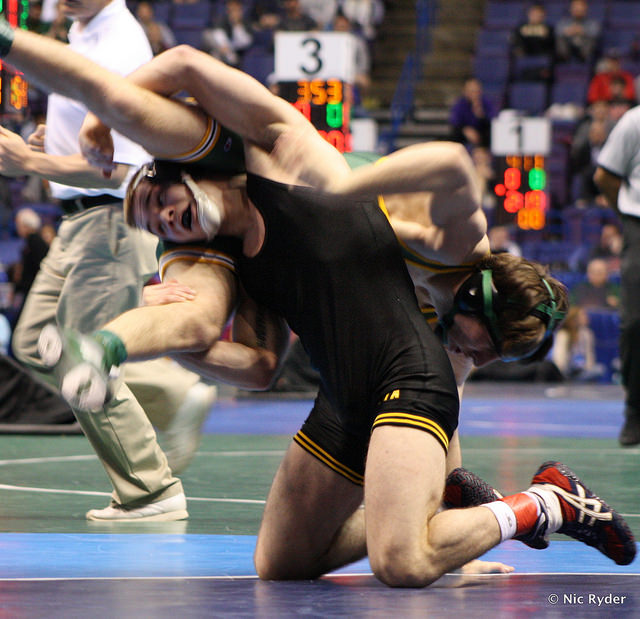 “The Dual” is finally here. If you don’t know what I am talking about you must have spent your summer zeroed in on baseball and football OTAs, because I don’t think there was a more talked about matchup this offseason other than this dual we are about to preview between the Iowa Hawkeyes and Oklahoma State.

First, for one of the nation’s most rabid fan base it means that the season is officially back. Sure practice started a month ago, but here we have our first competition.

Second, it’s Iowa vs Oklahoma State. One of college wrestling biggest rivalries and once again it’s a matchup between two top three teams.

Third, it’s in Kinnick. Does it get any more Iowa than that? Tom Brands couldn’t fit another fan into Carver-Hawkeye Arena so he moved his biggest dual to the football stadium and sold over 35,000 tickets.

Then we have the matchups. Between the two teams there are eight top five wrestlers competing with three of the weights featuring top ten battles. Folks let me tell you right now you don’t want to miss this.

Last year these two teams squared off in early January and it was not pretty for the Cowboys as the Hawkeyes walloped them 30-7 in their own gym; which started on a 19-0 run that was kicked off by Thomas Gilman defeating Eddie Klimara 4-0. Both wrestlers would become eventual All-Americans at this weight, but the important thing to note about these two wrestlers is that Gilman has dominated the series having never lost to Klimara spanning over three seasons. Both teams like starting at 125 and Iowa will be looking for Gilman to set the tone inside (or should I say outside) Kinnick.

Looking for revenge at 149 pounds will be Iowa’s #3 ranked Brandon Sorensen against Anthony Collica who have yet to face each other in NCAA competition, but the two did meet at University Nationals. It was there that Collica shocked many by not only defeating Sorensen, but also #1 ranked Jason Tsirtsis in the finals. Sorensen is coming off a freshman campaign that saw him win 40 matches (the first to do so since Ed Banach) and Collica will be making his first appearance at 149 pounds after wrestling 157 as a sophomore.

If the dual doesn’t hinge on the 149 pound match, look for this 174 pound bout to be the swing match of the dual. Kyle Crutchmer comes in with the higher ranking, but Iowa fans are quick to point to last year’s Joe Parisi Open title where Alex Meyer was able to upend the Oklahoma State wrestler. Last season Meyer was able to put together key victories for the Hawkeyes when called upon, and this Saturday will be a big test to see if he is ready to become one of the favorites at this weight class.

A year ago Sammy Brooks took on Nolan Boyd and had a pretty decent lead before he went for a big throw and was tossed to his own back. Brooks lost that match 9-6 and he will certainly be looking for redemption. That being said Jordan Rodgers did score an 11-7 win over teammate Boyd, so he could be the option here for the Cowboys. Either way Brooks should be favored, and I don’t expect him to wrestle tentative even though letting it fly is what burned him last time.

The 141 pound situation didn’t exactly get resolved this weekend, with both Topher Carton and Logan Ryan falling to the same opponent, but solely based on the fact that Carton forfeited, I am going to lean that Ryan gets the start this weekend vs returning All-American Dean Heil. Either wrestler will have their work cut out, but Ryan does wrestle with a lot of aggression that could frustrate Heil.

The Hawkeyes will be heavy favorites at both 133 and 197 where they return a pair of two-time NCAA All-Americans: Cory Clark and Nathan Burak respectively. After bumping up from 125 to 133 pounds, Clark was once again able to reach the podium by making the finals. In doing so he kept a two decade long streak alive with the Hawkeyes having at least one wrestler reach the finals. He is expected to match up once again with Gary Wayne Harding, and Burak should face Austin Schafer. Last season Clark won his meeting by a score of 10-5.

Oklahoma State will be heavy favorites at 157, 165, and 285 where they feature a trio of ranked wrestlers against three wrestlers that wills start the season unranked for Iowa. At 165 Iowa freshman Burke Paddock will face a tall task taking on two-time NCAA champion Alex Dieringer, one of the nation’s most dynamic scorers. Sam Stoll will make his debut in the lineup vs 2014 All-American Austin Mardsen, and either Edwin Cooper or Skyler St. John will get the nod at 157 against one of former Pennsylvania high school standout Chance Marsteller, freshman Ryan Blees, or Joe Smith.

Remember to follow along in the action right here on IAWrestle.com!