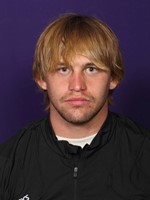 The most matches of UNI’s wrestle offs were at 149 pounds, where we had a total of four. Three were to determine who would be at the top of the heap, and the other was more an exhibition match between two true freshmen in Max Thomsen and Hunter Washburn.

Senior Jarrett Jensen, who is making the cut down to 149 from 157, lost in his opening match 1-0 to Peter Stewart. Jensen pushed the pace when the two wrestlers were neutral, but couldn’t score a takedown. Stewart rode Jensen out of the second period, and then chose neutral in the third when again neither wrestler could score, giving Stewart the 1-0 win on riding time. Stewart is a junior transfer from Iowa Western Community College, who then dropped his next match to returning 149 pound starter Gunnar Wolfensperger.

Wolfensperger is also a junior and obviously has a little bit to say about Jensen just assuming the starting role at his weight, as he beat Seth Stetzel by pinfall in his opening match, and then pretty well dominated Stewart in the final. It will be interesting to see how Coach Schwab handles the situation here going forward.

149: Gunnar Wolfensperger won by decision, 10-4 over Peter Stewart, this match is the first half of the video, the second half is Trevor Jauch and Jake Hodges