Iowans and Recruits to Watch at Super 32 This Weekend 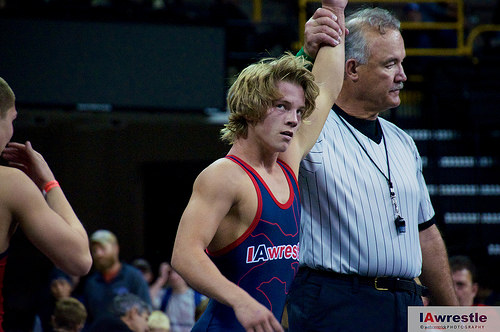 For some time now, the Super 32 tournament, which is resides in Greensboro, North Carolina, has been the pinnacle of preseason wrestling tournaments. Usually occurring the first weekend in November (this year that includes October 31st as well), the Super 32 draws talent from just about every state in the country, and it’s not uncommon for a weight to have more than five wrestlers who appear in the top 20 of their weight class rankings.

This preview will highlight the weights where a wrestler from the state of Iowa (or one verbally committed to an Iowa college) that will be competing at the prestigious event. For a brief overview, Iowa will be sending three nationally ranked wrestlers to North Carolina. Iowa State will feature a pair of nationally ranked recruits and Iowa will be represented with one.

The smallest weight class packs the biggest punch as far as Iowans go. Freshman-to-be Aden Reeves of Albia and Waukee sophomore Kyle Biscoglia are two of Iowa’s three ranked wrestlers competing at Super 32 and both are coming off of strong summers. Reeves burst on the scene at Fargo where he won All-America honors in both Greco-Roman (5th) and freestyle (4th) to earn the #10 national rankings. Biscoglia took 6th at both UWW Cadets and Fargo this summer, and is coming off of a Conflict at Carver title earlier this month.

The field features four additional top ten, including the newly anointed #1 and #2 ranked wrestlers Dylan D’Emilio (OH) and Travis Ford-Melton (IL). Expect this to be a bear of a bracket, but with Reeves still pretty new on the scene, he has a chance to show the nation just how good he really is.

A weight lacking in national accolades Iowa is still sending three pretty talented wrestlers. Justin Portillo has been ranked here and there at 106 pounds last season depending where you shop for rankings, and made a fairly deep run a year ago. Michael Millage was one of three freshmen to win a state title this past year in Iowa, but hasn’t had any Fargo success to this point. Noah Fye took third in that same bracket as Millage last year, and despite being a returning Fargo All-American he skipped the tourney in favor of baseball this summer. Fye very well could be on the cusp of a national ranking.

Quite possibly the most interesting weight for fans of Iowa high school fans to watch, Alex Thomsen is heading out for his first Super 32 tournament and he will 100% be in the conversation to try and win the title belt. The Des Moines Register, Flowrestling, and even some of the IA Wrestle crew have declared Alex Thomsen the best wrestler in Iowa and while his bracket won’t be weak, it will still be winnable. Five top ten wrestlers will be in attendance at this weight, but only one of that group is a top five himself. The other looming factor is New Jersey’s Nick Raimo, who defeated Thomsen at Fargo this summer. This is Iowa’s best weight to walk out with a champion.

Also contending will be a pair of state champions Drew West and Josh Portillo who will each look for some quality wins to move themselves up the rankings.

Not going to lie. This may be the toughest bracket in the entire Super 32 tournament and that isn’t a phrase thrown around lightly when it comes to Super 32. For starters Daton Fix is considered the #2 ranked wrestler in high school overall and #10 Nick Suriano is no picnic either. The #2 ranked 126 Vito Arajau is a known hammer and then there is the rest: #5 Kaden Gfeller (OK), #6 Luke Karam (PA), #7 Kyle Norstrem (FL), #16 Mitch Moore (OH). To say placing in the top eight is an accomplishment is putting it mildly, Cyclone commit Ian Parker is going to have his work cut out for him this weekend.

One of Kevin Jackson’s biggest recruits for the 2016 class will drop to 132 this weekend in search of a few wins. The move is actually surprising on paper because Storr would currently be the second highest ranked wrestler at 138 behind Ohio’s Brent Moore, but instead he will be in a bracket that features the weight’s #1, #3, and #5 ranked wrestlers. Most recently Storr took a loss to the #3 ranked Yuanni Diakomihalis of New York at the Journeyman.

Kind of some bigger news is that this weight will not be contested by 2014 runner-up Alex Marinelli of St. Paris Graham, OH opening the door for some other tough wrestlers to step up and make a name for themselves. Hawkeye fans will be interested to see what their #10 recruit in this weight class can do, and I would have to put his ceiling as champion of this weight. Drew Hughes and Thomas Bullard will make this weight for Kaleb, but I think he has a great chance. Osage state runner-up Tristan Johnson is another Hawkeye commit in the field. Johnson was the Conflict at Carver runner-up a few weekends ago.

For the middle school weight’s we won’t dive into a ton of detail other than to say it looks like TJ Sebolt of the Sebolt Wrestling Academy will once again provide a strong presence in the Middle School and Elementary brackets. I don’t know enough about the rest of the field, but I will say that Drake Ayala (MS), Carter Fousek (MS), and Ryder Block (11 and Under) are three of the wrestlers in the division that I will be keeping my eye on.