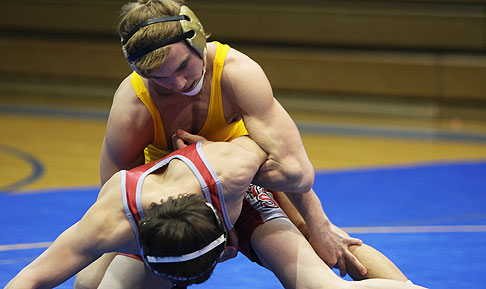 Looking at the Briar Cliff Charger program it’s easy to see that this is a program hungry to replace last year’s disappointing finish as none of the three national qualifiers were able to place on the stand in Topeka. Head Coach Joe Privitere looks to come back for a strong 2015-16 season returning two of his national qualifiers, and he has taken three wrestlers to the national championships in each of the last three seasons.

It starts with the “little man” in the lineup as senior Kyle Robinson will be back at 125 pounds for the Chargers. Robinson was eighth as a sophomore, but fell just one match short of his second All-American honors in 2015. He won an impressive 31 matches as a junior and is this year’s team captain. There will be a trio of talented freshman looking to make their mark with BJ Hays – a three time Alabama state finalist, Kolby Smith – an Idaho state runner-up and 180 match winner in high school, and Krystian Velez – a preseason nationals All-American all looking to try and take the second spot at 125.

If one of those freshmen at 125 is unable to break through at 125, look for them to bump to 133 where they will challenge another freshman, Zach Ulven form Sloan, Iowa. Ulven was a three-time medalist in Iowa and put together a career 174 wins in high school.

The other returning NAIA qualifier would be Joe “Skylar” Weber at 157 pounds. Weber, like Robinson, is also a team captain and two-time NAIA national qualifier. He also won an impressive 31 matches last season and is looking to end his career in a Charger singlet on a high note in 2016. Weber will see some good competition with Rashawn Howard, a Oklahoma state runner-up.

There are a lot of names vying for the 141 spot, with sophomore Jacob Caskey and junior Sonny Gulesian both receiving competition by a pair of senior transfers Chris Hunt and Zach Ryan. With four quality wrestlers competing at one weight, whoever emerges at this weight will already be battle tested.

Rounding out the lightweights will be senior Jacob Spadoni at 149 pounds.

From there we move to the back half of the lineup, which is heavy on the veteran presence, save for one weight class. That weight is where freshman Zach Davis will look to take over, as he is the only 165 pound wrestler on the roster. Technically senior Steven Schaffer is also listed at 165 pounds, but it appears that he will be bumping to fill the 174-pound spot in the lineup.

Another pair of seniors Curtis Bright and Jordan Watkins will be the key returners at 184 and 197 pounds in the Charger lineup. There will also be a trio of seniors competing for the heavyweight spot in Dalton Presley, Brian Ervin, and Corbin Cooke all looking for the spot.

The Briar Cliff program will look to take a step forward in 2016, but they will need someone other than Robinson and Weber to emerge in the lineup to continue coach Privitere’s streak of taking at least three national qualifiers to the NAIA Championships. This lineup has plenty of veterans, and perhaps just the right amount of youth to take that step forward.